We have been on a beet salad kick since just after Christmas. I made some to take as part of our offerings for Cheese Day on New Year’s Eve.

When we got home, T couldn’t stop raving about it and kept asking to have it again. Yay! Finally a vegetable that he wants to eat lots of! 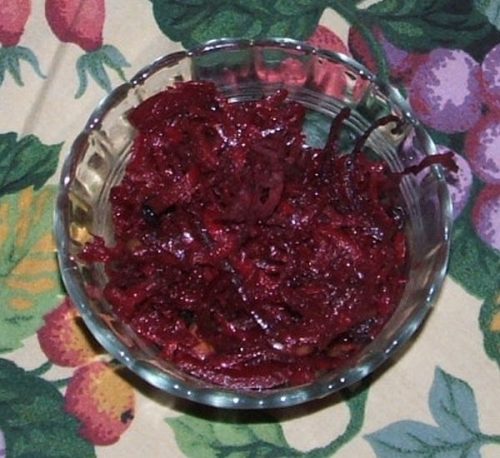 One of the first nights in January, we had broccoli (I had my usual half plate and Tot had his 2 or 3 spears) and each of us had giant bowls of beet/carrot salad. I had to add carrots to the salad (good thing we had some in the fridge) because I had thought it would be a fun idea to chop a fresh Thai red chili into the beets and onion salad. Yikes!!! It became insanely hot with just that one small chili. Ooops.

With the added carrot, the heat was just manageable….

The other thing I’ve been adding to the beet salad is really finely grated horseradish. In early November, we found almost a whole horseradish root lying in the bottom of the vegetable drawer in the fridge. It hadn’t turned to mush. It had petrified.

It’s not the easiest thing to grate, but if I use the smallest setting on the box grater, it turns to a lovely horseradish powder. Ha! And T told me to throw the root out!! Who says I have to obey immediately?

Deja-vu all over again….

Who me? Short attention span??? Ha!! It turns out that I didn’t invent the idea of using horseradish in beet salad. In fact, in 2013 (that’s only 7 years ago!) I already followed someone else’s recipe for beet salad with horseradish:

[I] read about Red Hazeret, a relish made with beets and horseradish. It sounded quite similar to the beet salad that we make. But instead of chili flakes for heat, it would use horseradish

– me, blog from OUR kitchen | Being Seasonal with Beets and Horseradish 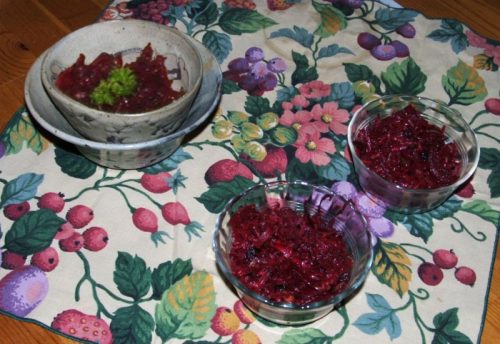