recipe: Beets and Turnip with Fennel and Mustard Seeds 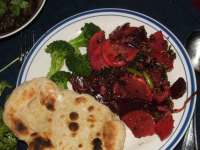 Last night we had Rogan Josh again. With naan. Of course. And I was planning on doing a photo essay of making naan in the oven.

Everything had been timed perfectly! The Rogan Josh was ready to serve. I had just finished making a new favourite: beets and turnips. They were staying warm in their pan on a rack on the stove. As soon as the bread was done (about 10 minutes tops), we could sit down to our sumptuous repast. 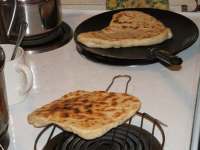 Yes, at some point not long after turning the oven on to preheat the stone, a fuse blew. We didn’t notice until after putting the first two naan in the oven. Luckily for us though, we remembered that we had once made pita on the stovetop. So we quickly grabbed the tava and started heating it on the big burner.

And disaster was averted. By adding only an extra ten minutes of cooking time, we were able to tuck in. Yes, indeed, rogan josh with beets & turnips, broccoli and naan is delicious!

Here’s how I made the beets and turnips (note that this was made with the smaller turnip, NOT a rutabaga):

Beets and Turnip with Fennel and Mustard Seeds
serves two

Serve with Indian curry and naan or rice.

Alternatively, dill seeds work as well as fennel seeds; add a little cream and this is fantastic with a western style dinner. Add some goat cheese and/or toasted pecans and the vegetables are fabulous tossed with penne.

I was just typing out the recipe when T called from the kitchen to report that the oven is NOT working after all. Even though we put in a new fuse this morning. This is dreadful. We really really do not want to be buying a new oven! We love our oven and stove that date from sometime in the early 1960s!

Our next door neighbours recently purchased a “state of the art” fridge and have already had a repair man come at least 5 times to fix yet another thing wrong with it. Their equally new “state of the art” dryer had to be returned after a repair man came several times to fix a bug. They are NOT hard on their things. They take good care of them. It’s all these stupid computer chips that are in machines now that make them so quickly break down.

~~~~~~~~~~~~~~
Report: T switched the oven fuses and says that it seems to be holding now. I hope so! I hope so!! (There are two loaves of T’s sandwich bread in the oven right now….) I must say that I really don’t want to have to bake bread on the stovetop until the snow melts (if it ever melts) and we can use our barbecue to bake bread.

On another happy note: it didn’t snow last night and the sidewalk is almost completely visible. Maybe spring will spring after all!

This post is partially mirrored on The Fresh Loaf.

4 responses to “Beets and Turnips are great with Rogan Josh”