Apparently, we are reaching the end of beet season in Ontario and will soon be unable to get local beets until July. Augh!!! Quick!! Get some now so you too can make Red Hazeret.

Red Haz-e- what?? Or at least that’s what I said when I saw Shulie’s (Food Wanderings) post

When we went over the Egyptians’ afflictions every year in class, around Passover, I worried about rain of frogs and locust. My shoulders cringed, sitting still in the small, wooden chair in class, my jaw tense. I kept my mouth tightly shut though I had much to voice. I wriggled as a contortionist to shimmy away the itchiness at the thought of lice. Ten plagues, oh the possibilities of plights to be distraught about, even though I am an Israelite. I was the protagonist in my very own tragic post biblical drama. 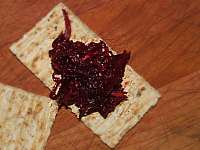 I read this and thought, eeeeek!! I too can’t stop cringing at the thought of rain of frogs and locusts.

Luckily, I have a very short attention span though and quickly forgot my squirms as I read further into Shulie’s post to read about Red Hazeret, a relish made with beets and horseradish. It sounded quite similar to the beet salad that we make. But instead of chili flakes for heat, it would use horseradish – fresh horseradish, that is. There’s really no other way to go.

For years, whenever we want to serve horseradish with a roast or a chop, we chop off a chunk of fresh horseradish, peel it and grate it. We add just enough mayonnaise to hold the horseradish together. It’s so fresh tasting and packs that wonderful hot punch that only comes from horseradish (and wasabi). Any bottled horseradish I’ve ever had is just too faded for my taste.

The horseradish grown in Ontario likely originated
from one plant that was cut into thousands of pieces. […]

Believed to have originated in Eastern Europe and western Asia, horseradish has graced the Passover seder table since medieval times as one of the traditionally eaten bitter herbs, or maror, symbolizing the bitterness of the Israelites’ slavery in Egypt.

Beets have been cultivated since pre-historic times in the Mediterranean area and were originally grown only for their leaves. During the Roman empire, people began to eat the roots as well. Today, beets and beet dishes are still widely popular throughout Europe.

It was a beautiful day so we jumped on our bikes to go for a ride. On the way, we stopped at a couple of vegetable markets to buy beets and horseradish so we could try red hazeret with dinner that night.

As soon as we got home, I made the relish by grating raw beets. All the recipes I read called for cooked beets. But that didn’t make sense to me if we were going to eat all of it right away. Not to mention that the beet salad we make is very similar to this and we never use cooked beets in it.

I put some on a rice cracker (I know. I’m supposed to be using matzoh crackers. But even though I love them, we didn’t have any on hand). I tasted the salad, expecting to have my nose cleared with that wonderful hot burst from the horseradish.

Rats! Even though I used what I thought was a pretty big chunk of horseradish, I couldn’t taste the horseradish at all! And it’s not as if my eyes didn’t tear like crazy as I was grating it.

Not that the salad didn’t taste good. It did!

We decided to let it meld a little to see if the horseradish flavour would pop out more. 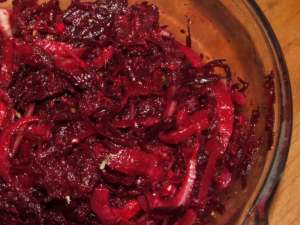 Surprisingly, the heat of the horseradish was almost invisible. Only the bitterness remained! To counteract the bitterness, rather than adding sugar, I added a little thinly sliced onion, some dried tarragon and a few chopped apricots. That did the trick to smooth out the earthy, bitter flavours.

It still wasn’t hot but it was quite delicious and very refreshing as a side with roasted garlic chicken, mashed potatoes and green bean casserole.

Hmmm. Shall we make more to serve with Easter dinner?

Here’s what I did to make the salad:

Raw Beet and Horseradish Salad
based on Shulie’s recipe for Red Hazeret. Nope, no measurements- you’ll want to taste it as you go

1.) Raw Beets: I was surprised to see that virtually all the recipes I looked at on the internet called for grating cooked beets. But while we love cooked beets, we really like the texture of grated raw beets in a salad. Even if it the idea of using raw beets makes you nervous, I do urge you to give it a try.

2.) Horseradish: Many of the internet recipes called for bottled horseradish. Bleah. Bottled horseradish just tastes vinegary and slightly sweet. Do yourself a favour and get a horseradish root. It’s worth it! But. Do be careful when grating it. The fumes are very powerful. When grating the horseradish, hold your breath and keep your mouth shut. This will help to stop your eyes from stinging. 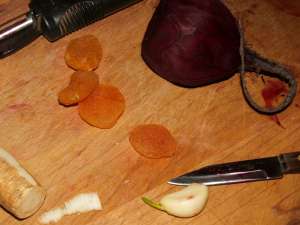 3.) How Much??: With one large beet, I grated a two inch piece of horseradish. I was amazed that it wasn’t enough to make the salad hot – it just made it a little bitter tasting. I added about a quarter of a large onion for sweetness.

As I was writing this up and wandering around the internet, I thought I’d look up “hazeret” and other Passover traditions. Silly me. I thought that the “ret” at the end of “hazeret” meant “red” and was pointing to the beets. Could I have been more wrong?

Maror This bitter herb allows us to taste the bitterness of slavery. Today, most Jews use horseradish as maror. Originally, though, maror was probably a bitter lettuce, such as romaine, or a root, such as chicory. Like life in Egypt, these lettuces and roots taste sweet when one first bites into them, but then become bitter as one eats more. We dip maror into harosetin order to associate the bitterness of slavery with the work that caused so much of this bitterness.

Hazeret A second bitter herb, used in korech or the Hillel sandwich, which consists of matzah and bitter herbs (some add haroset as well). Many Jews use horseradish for maror and romaine lettuce or another bitter green for hazeret.

Unleavened bread was one of the foods the Jews in Egypt were commanded to eat along with the paschal lamb (Exodus 12:8). In commemoration of that first seder meal, and the haste in which the Israelites left Egypt-giving them no time to allow their bread to rise-we eat matzah at the seder (and instead of bread throughout the holiday)

The Bible prohibits the eating of leaven during the festival of Passover (Exodus12:15-20). The Hebrew word “hametz” is translated as leavened bread and refers to food prepared from five species of grain – wheat, barley, oats, spelt, and rye – that has been allowed to leaven. To these, Ashkenazic [European Jewish] authorities add rice, millet, corn, and legumes. […] It is customary, however, to make matzah from wheat flour only, and it is essential that the wheat and flour be given no chance to leaven. Hence, the grain used for matzah must be kept perfectly dry. 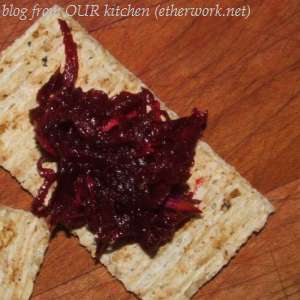 3 responses to “Being Seasonal with Beets and Horseradish”