summary: review of “Bien Cuit” by Zachary Golper and Peter Kaminsky; good ideas; poor choices; is it time to make room on the cookbook shelf anyway? (click on images to see larger views and more photos)

Really? White print on black background? Bien Cuit’s art directors are crazy! Do they ever try reading the text after they’re finished making it pretty?

I love that the public library makes it possible for me to review a book before deciding whether to get a copy for my own shelves! And I was excited about this popular book, having to wait patiently (okay, okay; maybe it wasn’t so patient a wait) for my number 12 (of 12 holds, with just 9 copies in the system) finally turned to number 1. But at last I was summoned by the wonderful female-like computer voice on our answering machine saying

The Toronto Public Library has one or more items for the customer with the initials J! M! E! and whose library card ends with the digits […]

I LOVE getting that message! 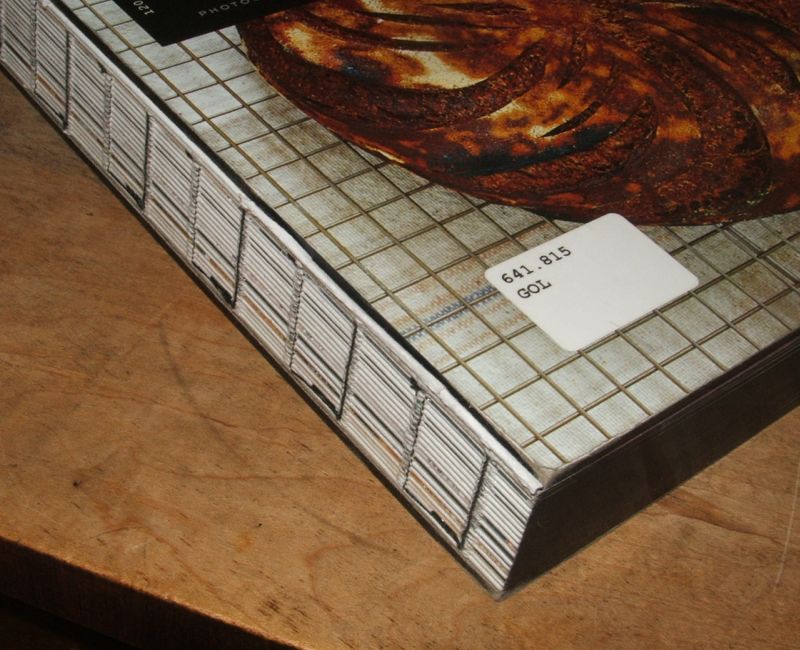 Full of stunningly beautiful photographs as well as some excellent instructional photograph essays, Bien Cuit: The Art of Bread by Zachary Golper and Peter Kaminsky with photography by Thomas Schauer is advertised as having an exposed spine. As if this is a good thing….

Indeed, the inside pages are in fine shape (aside from the white print on black background – I’ll get back to that). It’s the cover pages that are problematic. The library book I had was new in November 2015 – it’s just 4 months old! – and judging by the condition of the inside of the book, the borrowers have been quite careful with it. All the pages were clean with not even a hint of pages being dog-eared.

The corners of the covers already have dents in them. I suppose this has to be expected with a library book that may be dropped a few feet when being returned through a book slot. But, there is no excuse for the horrible tearing of the inside fly.

Luckily, the library had put a big elastic band around the book to attach the hold slip to the book. As I read the book, I gingerly turned each page to keep what was left of the binding intact and dutifully kept the book closed with the elastic whenever I wasn’t reading it. 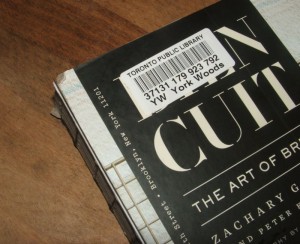 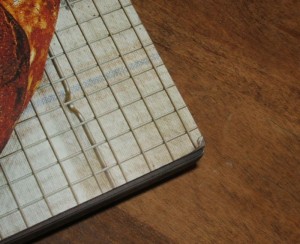 As for the content, there are many many recipes as well as detailed descriptions of the various standard ingredients used in bread making. But I was more than a little sorry that there are not more explanations about how to achieve the fancy scoring that is displayed on the front cover.

Also questionable are the instructions to preheat the oven for over an hour and to bake bread at exceedingly high temperatures. This may well work for a bakery but it’s really impractical and costly for the home baker. (How do you spell blown fuse, Zachary Golper?)

I also find it quite odd that there are few (if any) nods to the other fine bread bakers who have produced excellent bread books, such as Chad Robertson, Ken Forkish, Maggie Glezer, Rose Levy Beranbaum, Carol Field, etc. etc. In Golper’s quest to find great rye bread, bagels, bialys, he completely neglects to mention that there are already many viable recipes available to the home baker. In his searches for exactly what meat is used in lard bread (aka prociutto bread), he mentions asking Mario Batali. Not that there’s anything wrong with Mario Batali….

Still. In spite of their arguably insular approach to finding recipes, Golper’s and Kominsky’s accounts of their Bread Quests are wonderful parts of the book and not to be missed.

Also called prosciutto bread, this delicious calorie bomb is a reliable old warhorse at Sicilian-American bakeries all over Brooklyn. […] Peter suggested a trip to Villabate Alba, his favorite Italian bakery, located in Bensonhurst, an old middle-to-working-class neighborhood that had not yet been gentrified into a mix of espresso bars and expensive clothing stores. Dark wood accents everywhere, brightly lit glass cases and equally brightly colored pastries dazzle you as you pass over the threshold from the workaday neighborhood into a store that looks nothing so much as inside of a jewelbox: creamy cannoli, mini pies filled with apricot preserves and topped with toasted pine nuts, colorful cakes topped with marzipan replicas of fresh fruits as well executed as any old master’s still life, and, almost hidden in the bread section, a lard loaf […] We got closer to the secret at G. Esposito & Sons Jersey Pork Store on Court Street. […] I asked the proprietor about those little bits of meat, largely unidentifiable, that studded the best lard breads. “I think it’s called ciccoro,” he said. “What is it? How do they make it?” Not sure,” he said, either because he truly wasn’t sure or because you don’t reveal secrets. But ciccoro was all I needed to hear. Within minutes I was Googling the word on my phone. No luck. I tried “chicorro.” Then “cichorro.” Three strikes. As a Hail Mary, we fired off an email to Mario Batali, who is most obliging when it comes to questions of la cucina Italiana. “Is it ciccioli?” he replied

Considering that Carol Field did extensive travelling through Italy in search of bread recipes and includes a recipe for ‘Pane con i ciccioli (bread with pork cracklings)’ in her book “Celebrating Italy: Tastes & Traditions of Italy as Revealed Through Its Feasts, Festivals & Sumptuous Foods”, it seems a bit strange not to automatically think of asking her. The bread recipe is also in her book, “Italy in Small Bites”. And Marcella Hazan features ‘Focaccia con i ciccioli (flat bacon bread)’ in her cookbook “More Classic Italian Cooking”.

In “Lidia’s Mastering the Art of Italian Cuisine” (released just one month before “Bien Cuit”) by Lidia Matticchio Bastianich, there is the following entry in the glossary :

One of the most annoying aspects of what is otherwise a rather stellar bread cookbook, is the choice of colour for the recipe pages: black with white print.

Seriously? And semi-gloss black at that? The smallish white print glares ever so slightly. And a few words of that print are already getting rubbed away (or perhaps were never printed properly) in the library book I had. Did I mention that the pages otherwise appear to be untouched?

The instructions for making each recipe are quite detailed, verbose even (and that’s saying a lot, coming from me). Some of the techniques seem overly complicated. But occasionally, Golper skims over something important like exactly how to do fancy scoring, or whether a shaped loaf is supposed to double in size before being baked, or how to tell if a starter or dough has fermented or is at its peak. Nor do the instructions address different ambient temperatures or humidities. In some places, an essential part of an instruction is left out entirely (as in his Caramelized Onion Bread, when he neglects to mention that the proofed loaves are unlikely to change much from the time they are shaped until just before they go in the oven).

[E]very starter has a window of time when it’s at its peak, so when I say “ferment for 12 to 14 hours,” at any point in that interval it will produce peak or near-peak flavor. I’ve done a lot of experiments with every bread in this book to establish that sweet spot of time. You’ll get the best results if you follow the suggested times. The heart of my craft is a loaf of bread, elsewhere in life, less is often more.

So. Is this a “must have” bread book?

Maybe. But it’s not an “only bread book”. There aren’t enough basic bread recipes. Too many of the recipes have cutesy additions to them. For instance, the whole section on scones, for me, was useless. Candied lemon and blackberry, mission fig rosemary anise and pistachio, Alsation (cheese bacon and onions!!) and Margherita (basil and tomato?!) scones are all very well but give me a simple recipe for scones containing just a little nutmeg and raisins or currants. Especially after seeing Golper’s introduction to the scone section.

I particularly remember liking scones. To this day, most scones on this side of the Atlantic still leave me unmoved. All too often they have the texture I imagine you’d get with a baked hockey puck: dense, dry, and oversweetened (when they aren’t undersweetened). Most English scones, on the other hand, are a type of tender, unyeasted bread, and they’re slightly sweet but not overly so.

Okay, now that my complaining is over (mostly), here’s why I think this book is a worthwhile addition to a bread cookbook library:

While electric mixers are all very well, and even necessary for those who have injuries or debilitating conditions such as arthritis, I really like that the book promotes hand mixing.

But this book is not cheap. I still cannot believe that Amazon expects CDN$48.14 for a new hardcover book, or even more incredibly “from CDN$53.57” for a used copy! I don’t think so. The book is good, but it’s not that good.

Recommendation: buy the kindle edition (also not exactly low priced at CDN$21), and then hope it doesn’t suddenly disappear (I don’t have a kindle yet so have only heard about this kind of nightmare). The disadvantage, of course, to using a kindle is that you can’t put notes on the recipes.

Of course, with their shiny black background, you can’t easily put notes on the hardcover recipe pages either. All I can think of is: post-it notes…. 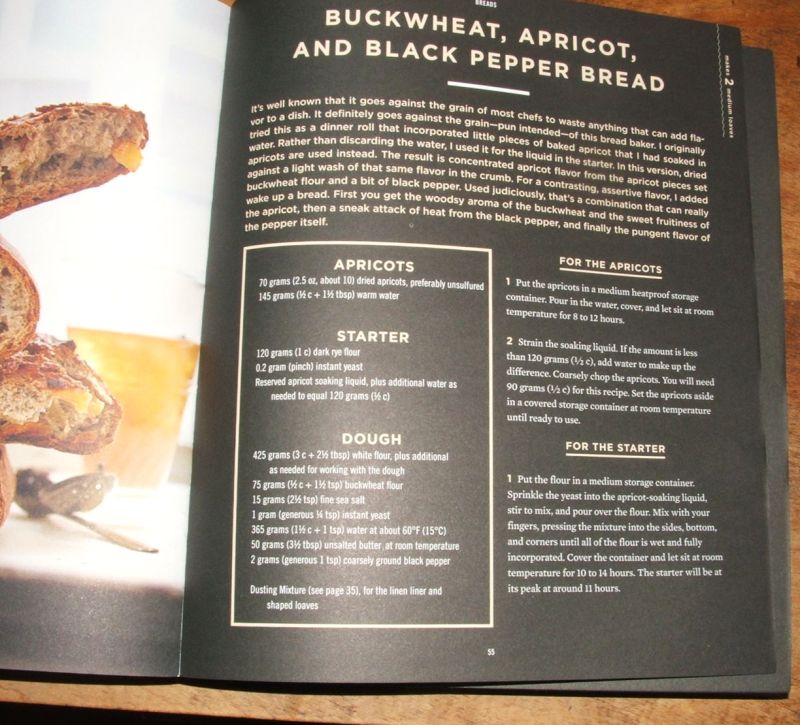 Basic bread is nothing more than flour, yeast, salt, and water. Yet these four simple ingredients produce immense variety in breads, and the pleasure we derive from them. A fitting metaphor is the string quartet: It has only four instruments, but by varying the tempo, volume, and tones, [a string quartet]¹ can produce an almost infinite number of musical pieces. And although Bach, Beethoven, and Mozart each worked with the same instruments and the same notes, each piece they wrote was different, offering new and surprising pleasures every time. Bread is a melody written with a few simple ingredients, yet by varying how it is fermented, how the dough is developed and handled, and how loaves are shaped and, ultimately, baked, we can create a world of variety in breads.

1.) string quartet It seems that Golper and Kominsky have never actually seen a string quartet, decribing it as “a violin, viola, cello and bass” (oh dear). Nor are they entirely familiar with the string quartet literature to not realize that Bach didn’t actually compose any string quartets. But that’s what editors are for, isn’t it? To fix minor errors…. 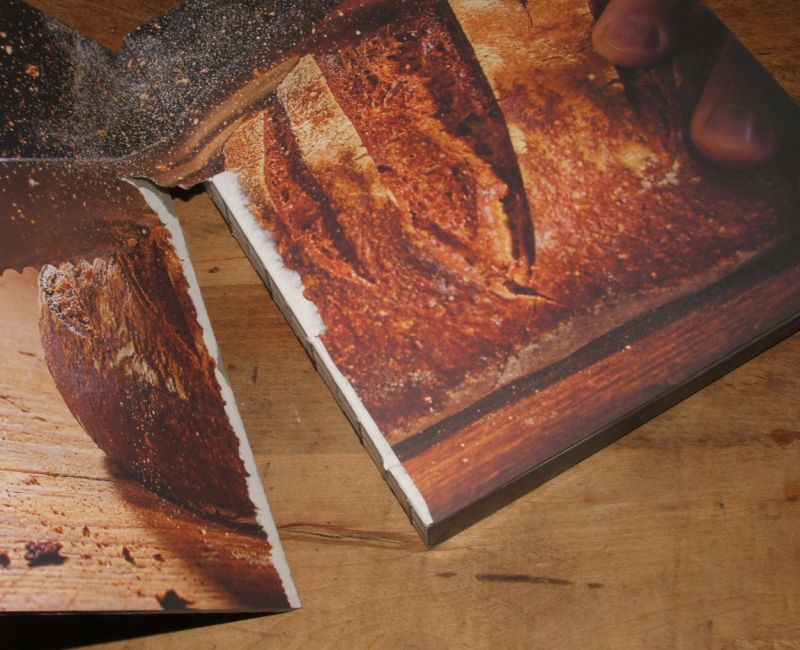 edit: Please see this brief review of the E-book version of Bien Cuit