summary: recipe for black bean brownies; in praise of “The Brilliant Bean” by Sally and Martin Stone; delicious with ice cream and cherries jubilee; information about My Legume Love Affair (click on image to see larger views and more photos) 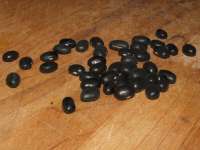 Aren’t beans are the most amazing things? They’re brilliant, in fact, as Sally and Martin Stone have pointed out in their wonderful book The Brilliant Bean.

I confess that haven’t made a lot of the actual recipes in the cookbook (even though they look awfully good – remind me to try them out!) but I have definitely used the Stones’ dried bean cooking method and often refer to their cooking times chart. Those things alone are worth the price of the book. 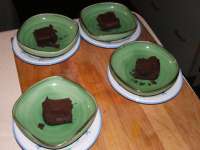 And then there is the brownie recipe in the dessert section at the back. It calls for black beans (aka turtle, frijoles negros, Mexican black) rather than flour.

It has been ages since I made black bean brownies. Normally, when I make brownies, I use flour and make Brownies Cockaigne in The Joy of Cooking. But when I saw that this month’s theme for MLLA was desserts and starters, I remembered how fabulous the Stones’ flourless black bean brownie recipe was and how really wonderful the brownies were. I decided to make them for our recent Easter feast.

Why bake with beans when flour produces a product by which all – or most – standards are set? […] But beans do offer at least two guarantees over white flour and whole wheat flour baking. The product will be more nutritious, containing fiber, protein and ohte healtful componens tat are milled away in white flour productions. The product is also moister than that produced by white or whole wheat flours. […] Bean purees contain a good deal of water and so baking times are longer. But if you like moist, almost creamy-textured cakes, beans are beautiful.

Yes, black bean brownies look and taste JUST like brownies, even though there is no flour at all. They are a little fudgy on the inside and very chocolatey. They’re… well… they’re brilliant.

Of course, icing is always nice on brownies (nice??? Ha. Generally, I’d say icing is essential on brownies!) but we decided that ice cream and cherries jubilee would be fun too. And although we are gluttons, even we knew that icing would get lost. 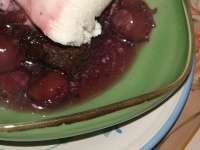 Here’s how I made the black bean brownies. Did I mention that they’re brilliant?

enough for a 8″ square pan

brownies
Make sure all ingredients are at room temperature!

Allow to cool completely before cutting.

Canned beans can be used as well. Drain and rinse the beans first. The liquid in canned beans is often a bit stinky, murky, and oversalted.

** If you are planning to ice the brownies, add Thompson raisins. Omit the raisins if serving brownies with cherries jubilee.

*** After washing well, beans can be soaked in plenty of cold water overnight as well. In the morning, remove any floaters, drain the beans, rinse and cover again with plenty of fresh cold water before cooking. The beans that float are damaged slightly and may contain the enzyme that will cause gut pain. The same goes for the soaking water. The amount of nutrients lost by discarding the water is negligible (or at least that’s what I think).

**** It’s likely that you will have more than ½ c of puréed beans. Use the extra to make black bean dip. (Fry diced onions, cumin, powdered coriander seed in olive oil til the onions are tender; add beans, oregano, black pepper and salt. Serve with pita triangles or corn chips.)

I see that I’m not the first to make bean brownies for MLLA; Ricki (Diet, Dessert and Dogs) posted about Gluten-Free Chocolate-Walnut Brownies in February 2008.

There are many many other desserts featuring beans in The Brilliant Bean: “gingered bean and carrot cake”, “rum cashew red bean pie”, “lemony garbanzo bean cake”… I really will have to take a closer look! And I can’t wait to see what the others have made for MLLA this month!

My Legume Love Affair (MLLA)
A while back, Susan (The Well Seasoned Cook) created this event to celebrate and expand our legume repertoire. She wrote:

This month, Courtney (Coco Cooks) is hosting and has chosen “starters and desserts” as the theme.

This month’s entry must be either a Starter or Dessert. […] All recipes must have a legume as the star ingredient. […] Legumes are not to be confused with the French term for vegetable. Think beans, lentils, pulses, and/or the sometimes edible pods that contain these seeds, and derivative products like tofu that are made from soy. [Email Coco Cooks about your entry and include the following information:

Ooooh!! I just noticed that there is a prize being offered!! A Random Drawing from the MLLA#10 post will be taken and the prize will be what looks to be a beautiful book: The Ball Complete Book of Home Preserving. Useful too! Oh, I hope I win!