summary: banana cinnamon buns; reminder to bake sweet bread on the TOP shelf of the oven; click on images to see larger view and more photos

The other day, we had some over-ripe bananas festering on the counter. I was very excited to finally get a chance to try making a banana cinnamon swirl bread, based on a description in the rather lame novel, Bread Alone by Judith Ryan Hendricks. The novel wasn’t that great, but there are some good bread recipes scattered throughout the book. (The writing of Ryan Hendricks novel wasn’t terrible; it was the story itself that was so lame. The recipe for couronne in the book was really stellar.) The banana cinnamon swirl bread was not written out in the novel and just said to add more bananas to the The Tassajara Bread Book recipe for Banana Sandwich bread and make it a cinnamon swirl bread. And then I decided to shape the dough into buns instead of bread. 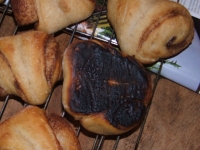 You’d think I’d have learned my lesson when I burned the bottoms of the Tuck Shop cinnamon Buns, wouldn’t you?

Remind me to bake sweet bread on the TOP shelf of the oven!

The unburned portions of these are fabulous. I’ll get some more bananas and hope they fester quickly so I can try making these buns again. When I do, I’ll outline the recipe.

edit 27 September 2008: I decided not to wait til bananas had putrified on the counter and posted the recipe.