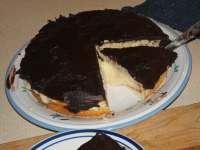 In February, Ivonne (Cream Puffs in Venice) made Boston Cream Pie for the first time. And it reminded me that I used to LOVE Boston Cream Pie. I’ve never made it. I’m pretty sure that Mom has never made it either – or not to my knowledge. Perhaps it was a grandmother’s specialty? Or a great-aunt’s?? But I know I had had it as a child.

And it’s surprising that I liked it. I’ve never been a big fan of custard. Or of sweet desserts. But for some reason the Boston Cream Pie combination of custard, cake and chocolate make the custard bearable.

So I mentioned to T that it might be fun to have a Boston Cream Pie. He was thrilled. And being the custardy dessert loving person he is, he jumped at the opportunity.

So we looked through our books for recipes – what?? – only one?!?! (“Joy of Cooking”). Then onto the internet to find a likely looking recipe for Boston Cream Pie on the Food Network site.

First of all… there was a little bit of difficulty separating the eggs (T had scrambled eggs for breakfast the next day):

Me (rummaging in drawer): I’m pretty sure we have a nifty egg separator. Do you want to use that?

T: No, I’ve separated hundreds of eggs… what the…?? Yes. I want the separator.

Me: See? It just rests here on the edge of the bowl. Cool, eh? You break the egg into it and the white drops through the narrow holes and the yolk stays nestled in th… hey!! what the…???

So T used his original method of holding the yolk in his hands and everything was under control again. And then came the whisking…

T (whisking madly): It says to whisk at medium speed… I only have one speed.

But egg whites take WAY less time to beat than cream. And very soon, T was folding whites into the yolks and not long after that pouring the batter into two round cake tins – not greased. I cut out rounds of parchment paper and put them in the bottoms of the tins.

As the cakes were baking (they smelled delicious), T began making the custard.

T: Six egg yolks?!! A quarter cup of cornstarch??!!! That’s ridiculous. I’m using 2 eggs and 2 Tbsp of cornstarch. It will be fine.

And so it was. Beautiful custard. Enough for several cakes….

Well… thank Heaven for the equivalents section in Joy of Cooking, is all I can say…. we only had 2 ounces of semi-sweet chocolate and had run out of unsweetened chocolate. But we had plenty of cocoa and plenty of butter.

And we decided that 8 oz of chocolate was a ridiculous amount anyway. Or in T’s words: “Hogwash – *Do 3 ounces*” And he used 1/3 cup of 10% cream instead of the heavy cream called for. The resulting ganache was fabulous. And enough for 2 or 3 cakes… 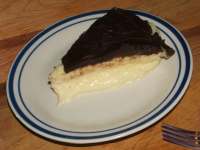 And the final result? Well, I have to say, it was brilliant. (click on image for larger view and more photos)

I’m not sure that it was exactly like the Boston Cream Pies of my youth but I really didn’t care. One of the really great things about it was that the chocolate was not very sweet at all AND it was just a little salty because T had used salted butter in the cocoa/butter chocolate square substitution. It was the perfect foil for the ultra sweet custard and cake. And even though there was enough chocolate for more than one cake, we mounded it all onto the cake. It was delicious…

All in all, a success. Thanks Ivonne for suggesting it!!

…and the extra custard? T spooned it over every one of his slices of Boston Cream Pie. He said it was good and did I want some? “No thank you.” (I couldn’t imagine the cake supporting any more custard!)

Note that there is too much custard for the cake. Serve extra custard on the side. Keep the cake refrigerated.