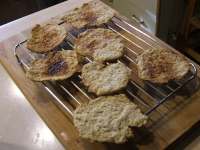 Wild Yeast starter can be just the thing to make discs. Of course, some discs are not exactly the kind of discs that one hopes to be creating. But there are bad discs and there are good discs. I think I’ve already whined enough about the bad discs; allow me to rave about good discs…

The other day when I made grissini, I used part of the dough to make Susan’s (Wild Yeast) Tortas de Aceite (Olive Oil Wafers). They may not look quite as nice as Susan’s but I have a feeling that we like them as much as she does.

I made ours with fennel seeds (didn’t have anise seeds) and Pernod, which I’m guessing amounts to the same thing as “anise liqueur”.

Wow! These discs are fantastic! They are easy to burn though… 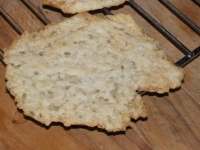 But if they aren’t burned, they are light and crisp, with a lovely hint of licorice flavour. (And I don’t even LIKE licorice….) They’re wonderful on their own or with cheese. They are the perfect thing to serve after dinner! They’re also good with soup for lunch or great with coffee for elevenses.

Frankly, even the darker ones were delicious. Thank you once again, Susan! We’ll be making these often!

Here is what I did to Susan’s recipe:

Susan says to store the discs individually wrapped in waxed paper. I just stacked them and put them into a plastic bag on the counter. They stay remarkably fresh tasting for about four days. (Maybe longer too – no idea – we don’t have any left…)

Next time, I’ll make sure the lemon peel is in bigger pieces. I used a zester and didn’t really notice until now that Susan suggests cutting the lemon peel in relatively wide strips that should be removed after being cooked in oil. I’ll also pay more attention to making each disc uniformly round and the same depth. (Not to mention trying not to burn any…)

Because most definitely, there will be many next times of making these! We adore them!

This post is partially mirrored on
The Fresh Loaf: bread discs – the good kind