summary: breaking down; saying goodbye to an old friend;

So long, farewell, auf Wiedersehen, goodbye
I leave and heave a sigh and say goodbye
Goodbye! 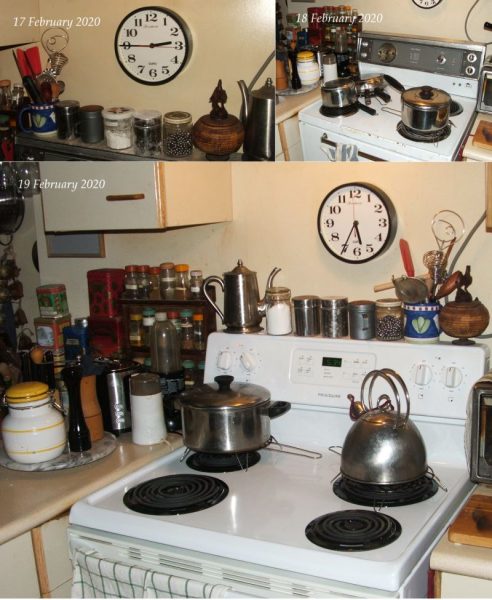 We LOVED our vintage (1970? 1965??) McClary stove that came with the house when we bought it – way back in the last century. It served us very well for years. Very well.

But in the recent past, after months of struggling with the oven door closing properly, only if I held my mouth a certain way, as well as having only three burners working (and no way to replace them), then weeks with just two working burners and fear of the other two suddenly and not very inexplicably clapping out, we broke down.

(The last burner to fail was after we had a small fire – quickly put out by covering the burner with a pot lid. Or rather, it didn’t actually fail, but we felt it was safer not to use it any more because it had developed a hot spot as well as a couple of dead ones on the coil.)

Yes, the new (to us) stove is used. Naturally, all of the used appliance stores are pretty far away from us, where we are by the lake. If there hadn’t be snow all over the roads, we would have made an excursion of it and ridden our bikes to the used appliance shop in the northwest of the city.

When we got there, I have to admit the place looked a tiny bit dodgy on the outside. But inside, it was full of lovely looking stoves, refrigerators, washers, dryers, and dish washers. But mostly stoves and fridges….

That’s right. We got another vintage stove (but, no flat top glass or computer chips for us, thank you very much). We really didn’t want one that had a computer chip!

After the guys delivered the new (to us) stove, taking the old decrepit stove with them – we stood back to admire it. Then, with only a little bit of struggle we managed to get all of the essential jars on the shelf above the stove.

With a little bit more of a struggle, we finally managed to get a little bottle of enamel touch-up repair to fix a ding on the side of the stove – we realized (when we got home) that the first enamel touch-up paint we purchased from the hardware store was “not recommended for stove tops”. What?! Why would anyone even make something like that? 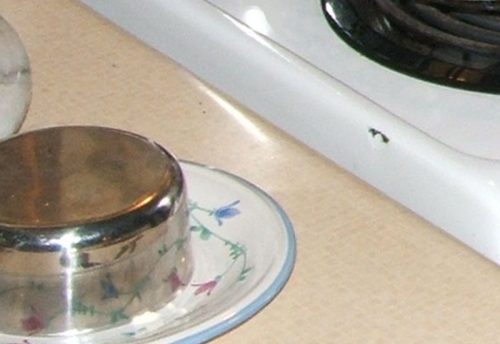 There was also a bit more struggling with fitting the stove into the slot. Oooooops! We very carefully measured the width to make sure the new appliance would fit. But – oh oh (scariest words in the English language) – we neglected to measure the depth, and did notice anything amiss until AFTER the delivery guys had gone.

Mercifully, after only a little bit of sighing, a minimum amount of requisite cursing, and shoving carefully (very carefully), we are now JUST able to get the top drawer beside the stove open, as well as JUST being able to get the oven door open. If the drawers didn’t have handles, there would be no problem…. 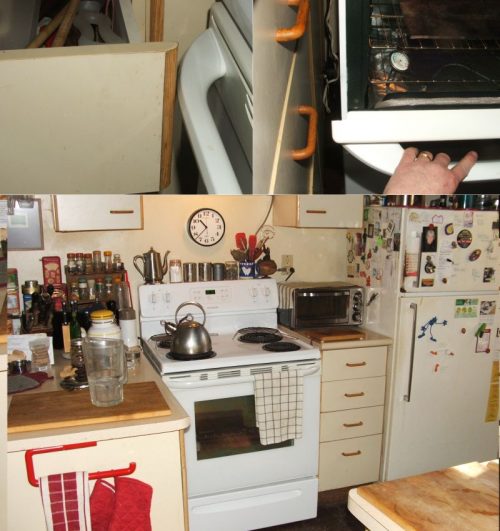 So. We now have FOUR working burners!! And a clock!! And a timer!! And an oven door that closes properly!!

And did I remember to mention there are four working burners?

The morning after the stove was delivered, we celebrated by getting out our cast iron griddle that we have been unable to use for about a year. T made spectacular hashbrowns (nope, no photographic evidence of the hashbrowns – but trust me, they were fabulous) to go with The Big Breakfast. 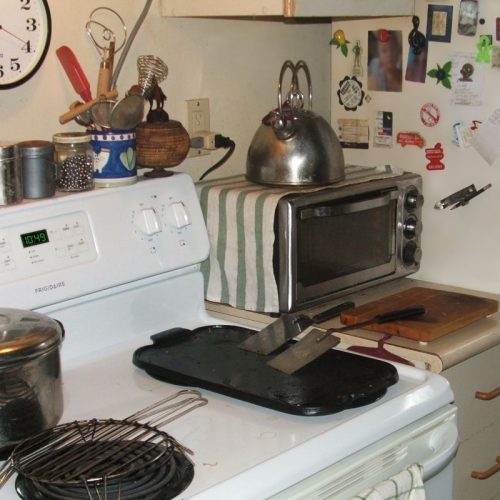 I must say that it’s wonderful to have a new, reliable stove. We also love that everything fits on the top ledge as it should!

We were quite concerned that we might not be able to do it, because of a reset switch on the left side. Happily, the coffee pot has a hollow base and fits neatly over the switch.

The oven is going to take a bit more to get used to. It turns out that, in spite of the fact that the oven has a self-cleaning switch, the temperature is a.) off by about 50F degrees, and b.) it takes about 15 minutes longer to preheat than the old oven did.

But. The latest loaf of bread turned out beautifully (sorry, no photographic evidence for that either), once we discovered that we had to preheat to 450F on the dial instead of 400F as on our old oven….

Most domestic ovens, whether gas, electric, fan assisted or solid fuel, will bake bread quite adequately. But, not surprisingly, some are better than others. […] [T]he temperature in the oven may have to fall by as much as 30°C before the thermostat calls for renewed heat, so the item being baked is subjected to a constantly oscillating temperature. […]
The knobs and dials on domestic ovens are notoriously unreliable. Even where they indicate a precipe temperature rather than a rough guide or a regulo number, you should regard the setting as approximate. […] [A]ll that is really required is to know what setting gives a cool, moderate or hot oven. […] In my recipes I try not to be too precise with oven temperatures […] mainly because if you understand roughly what heat a loaf requires (e.g. pretty hot for a big, wet, rye sourdough, moderate for an enriched sweet bread), you won’t go far wrong. 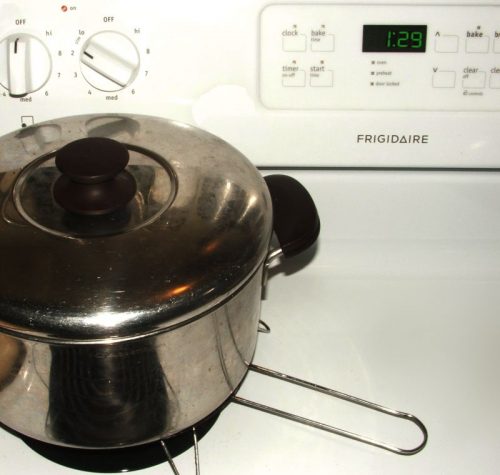 Things we will miss

We are very sad to have lost the dial for turning on the oven. Now we have to press various buttons before the oven even gets started, and now it’s not an easy glance from across the room to check that the oven has been turned off. 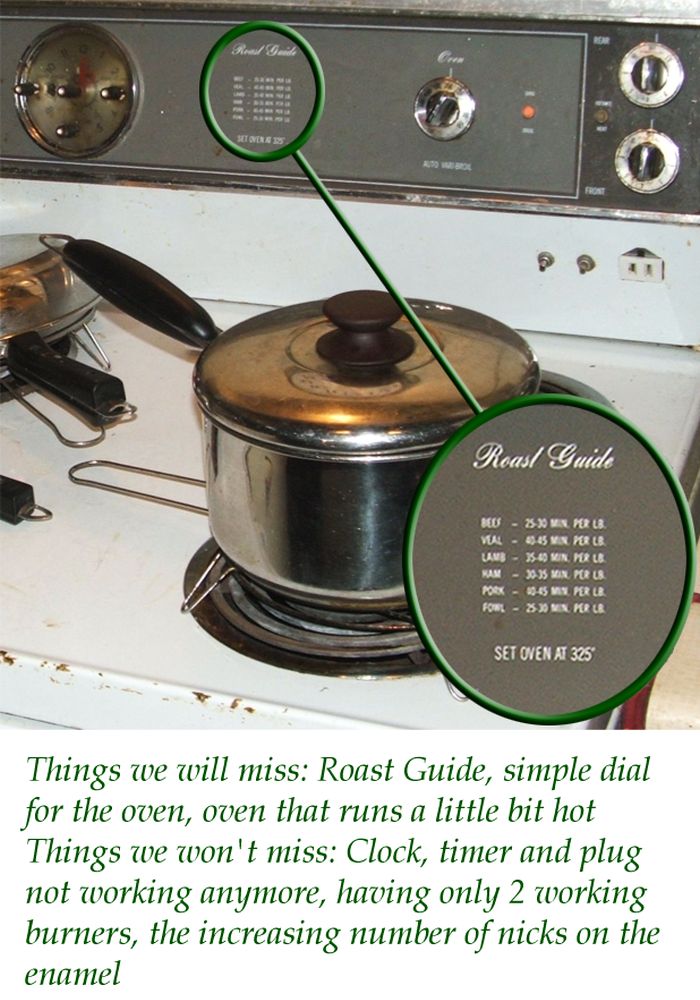 I did like the look of the analog clock, but the fact that the clock, timer, plug were not working at all (these were working perfectly well until about 10 years ago) was trying. When the plug DID work, it was odd to have it so close to a burner.

I will also not miss the easy possibility of inadvertently turning the automatic oven timer on by nudging one of the little dials away from “man”. Nor will I miss how hard it was to clean around the clock and dials. (As you can see from the photo, I didn’t clean it well at all.) 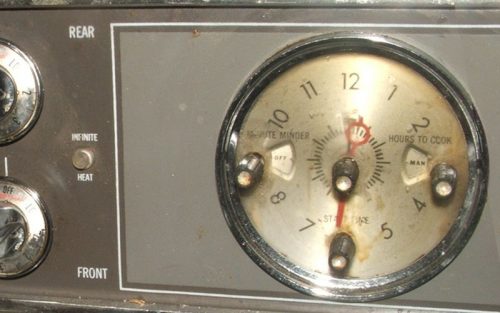 And I definitely won’t miss the increasing number of unsightly nicks in the enamel. It had gotten to the point that there was no point in trying to fix them.

I haven’t quite adjusted to the new stove though. Last Tuesday morning when T was making Shroves, I almost raced over to tell him to stop using “that” burner, because it was the one that had been flaming. Heh. I’m still not used to the new stove.

With the view of making sure this new stove lasts for the rest of our lives, on the advice of many, we will NOT be using the “self-cleaning” feature on the oven….