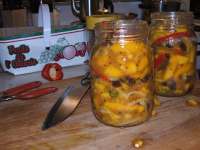 Now our canned peaches might look like peach jam! But no, no, no. Johanna was very specific that we are NOT to be "jammin’"! We’re to focus on "SAVOURY PRESERVES only"!

I confess that I’ve never actually done any canning, and on the day that we decided to take the plunge, I sent a panic email to my mom to ask her how she did her final processing.* And while we were waiting for Mom’s response, we searched our cookbooks and the internet to learn what we could about safe canning methods. I tell you, the things we do for the folks who created WTSIM…!! If we didn’t like them all so much, life would be so much easier!

It’s not as if others before Johanna hadn’t been pressing us to do some canning. Barbara Kingsolver was clearly writing directly to me in her wonderful novel Prodigal Summer with the most brilliant description of newly jarred preserves lined up on the counter gleaming in the late summer sun – that chapter alone is worth reading the book. Tea (Tea and Cookies) whose wonderful posts about canning, particularly “An Unexpected Obession“, kept haunting me. And Ivonne’s (Cream Puffs in Venice) post about her family canning parties in their garage was also so compelling. So what has stopped us??

We had plenty of good quality mason jars. And TWO unopened boxes of lids just waiting to be sterilized. Perhaps our hesitation was the fact that nobody has offered to make us any Walnut and Espresso Cake???

Was that the reason?

NO. I confess it. It was fear. Deer in the headlights fear.

Especially after I asked my sister out west about her canning adventures and she looked at me in horror and said she’d NEVER done any canning! And my mom was right there again! (Why oh why didn’t I ask her?? We were all too busy having fun and preparing and eating other feasts to be distracted by taking/giving lessons in canning…)

Yes. It was fear that was stopping us.

But we had all these peaches! That we thought we were going to use for one last peach-pie-hurrah. The peaches smelled fabulous. They looked correct. And with a light touch, they felt correct. But inside, they were hard as rocks.

Which enfuriated us! I’ve raved about this before. Why on earth do they insist on picking fruit so green?! We foolishly thought buying the fruit in a basket would protect us from having to buy rocks that smelled like peaches. Alas, no.

We contemplated what to do with a basket full of peach scented rocks. Let them sit on the counter to falsely ripen some more?

Or conquer our fear?

I leafed through a cookbook or two. It turns out that ALL the peach preserve and chutney recipes say to use firm fruit. Well, we had that all right.

So Johanna, be proud!! It’s because of you that we finally drummed up our courage and did some canning. Well, you and those stupid pickers who tricked us into buying the rock hard peaches.

After consulting our cookbooks, the first place on the net I looked was Alanna’s (A Veggie Venture) Practical Home Canning Tips that I bookmarked last year when I first imagined I might give canning a shot.

CHECK! We decided to use the round footed rack we use under roasts. …ummm “keep the jars upright“? But we don’t have any pot that size. And what if we HATE canning?!? We decided we would process the jars on their sides…

Oh dear… we have a couple of 1cup glass measuring cups….

What a relief. Finally we have one. CHECK!

Ummm… what to do, what to do… (Ha!! T has asbestos hands. HE’D take the jars out of their hot water bath!) 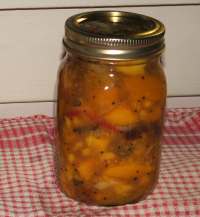 It turns out that one can (oooh, sorry, no pun intended there) manage without all those things. We used a knife, potato peeler, two large pots, a metal rack, tongs, oven mitts and tea towels.

Here is vaguely what we did:

Now, that wasn’t so hard, was it? We should do this EVERY year! What?? Forgot to put in the ginger??? Put it in next time!! 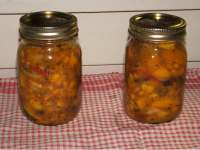 And how does the chutney taste? We don’t know!! We haven’t opened any yet. We’re waiting until the snow flies. But the jars sure do LOOK beautiful!

Thank you, Alanna, Tea, Ivonne, Barbara, Mom, and of course, Johanna, for getting us to finally take the plunge.

Next time, we’ll use smaller jars though. Or maybe we’ll go crazy and spring for a deeper pot.

Waiter, there’s something in my (WTSIM)… savoury preserves!

This month’s WTSIM… is hosted by Johanna (The Passionate Cook). She wrote:

Happy preserving and whatever you do, just don’t get yourself in a pickle!

Once again, the deadline for WTSIM… savoury preserve! is Friday 28 September, 2007. If you would like to participate, please read the following for more information:


* Naturally, Mom’s calm response to my email (only about three or four hours after we had finished) was most comforting. She reminded me that she always uses my great grandmother’s steamer, a precursor to the pressure cooker, to process all of her preserves and stands the jars upright on the stand inside the steamer, filling to just below the metal lids.

(Ha! I KNEW she hadn’t emmersed the jars!)

Bonus for managing to dredge through right to the end

Plagued with fruit flies? Use this wonderful recipe my parents-in-law told us about:

Leave on counter near the fruit basket that is teaming with fruit flies. You’ll be amazed at how many fruit flies you DON’T have the next day.