The other day, T suddenly had a hankering for Reuben sandwiches. Which means rye bread. But I’ve never made that kind of bread before so he had to buy rye bread. Horrors! We haven’t had to buy bread in ages!

Now, the kind of rye bread that I used to buy is made by the Toronto based Viking bakery. It is “sweet and sour light rye bread with caraway seeds”. And it’s fabulous. Or at least that’s what I remember. I tried to tell T to get it but he said he didn’t like caraway seeds in his bread…. 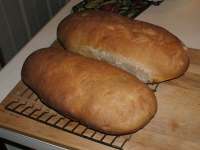 I looked on the internet at various recipes and then through all of my bread books. I was amazed to see that only one of our cookbooks had a recipe for rye bread with caraway seeds: “Sourdough Rye Bread” with caraway seeds in the Joy of Cooking (1975 edition).

It is a lean recipe, calling for rye flour, allpurpose wheat flour, yeast, water, caraway seeds and salt. The only changes I made were to add honey and substitute all-purpose flour and a bit of wholewheat flour for some of the rye flour. The bread turned out quite well as I hope you can see. (click on images for larger views) 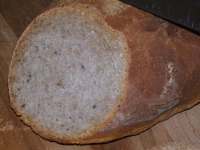 Actually, better than quite well. I’m very excited. It’s a bit different from any bread I’ve made before. And it’s not a real sourdough. I didn’t capture my own yeast…. And it takes several days to make (although that actual work time is hardly any at all). Kneading was particularly fun because the dough is quite stiff. I had to thwack it against the board because my hands got tired doing traditional kneading.

But I’ll definitely make this bread again. Next time though, I’ll add a bit of milk and perhaps a little more salt. But first we have to finish eating those two big loaves.

Poor us. It means that we will have to have Reuben sandwiches for lunch tomorrow.

Oh yes, and T’s reaction to the caraway seeds in the bread? No problem! He just came upstairs and garbled happily (his mouth was full), “Good bread!”

edit 26 January 2007: T has reported that caraway rye bread is the bread for Reuben sandwiches. 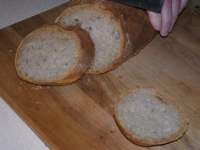