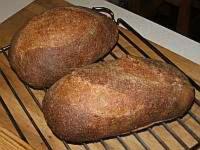 The last time I made caraway rye bread, I used the recipe in The Joy of Cooking. We really like it. But as I was leafing through The Bread Bible by Rose Levy Beranbaum, I noticed her recipe for rye bread. A recipe that looked too good.

She had me with the introduction:

Whenever my father had an excuse to return to the Bronx, he’d never come back without a freshly baked loaf from his favourite bakery. I liked the rye bread, studded with constellations of caraway seeds, best. My grandmother, who lived with us, would serve it to me spread thickly with unsalted btutter, the top paved with rounds of sliced red radishes […]

It has taken me years to get my rye bread to taste and feel just right. I like a wheaty flavor with not so much rye that it becomes bitter, and a chewy texture that is not so dense it becomes pasty.

How could I not try this bread? And so, after making a trip to the Bulk Barn to get some rye flour, on the evening before I planned to be baking the bread, I started with the first step…

Bread flour?! She uses strong bread flour for rye bread?? Ha. That’s silly (I said to myself). I decided to just use unbleached all-purpose flour. And rather than use the volume measurements, I decided to use my digital scale and began putting together the preferment.

Rrrrrr… my scale doesn’t register fractions of grams! I had to use measuring spoons for the yeast. After stirring the ingredients together in one of our casserole dishes, I put the lid overtop and put the bowl on the counter. And read the next part of the recipe.

Beranbaum says to leave this first bowl to sit as you mix together the rest of the ingredients for the bread. Yes! This is a same day recipe.

But no matter. I decided it couldn’t possible hurt to leave this first part on the counter overnight.

The next morning, I started to mix together the rest of the ingredients – flour, yeast, salt. Rrrrrr. There was no more water to be added. I use active dry yeast, not the instant yeast called for in the recipe. So I rehydrated the yeast in a tiny amount of water before dropping it onto the top of the starter. And then as per Beranbaum’s instructions, I carefully spooned the flour mixture overtop.

I should mention that I decided maybe it wasn’t silly use strong bread flour and decided to use it for the second part. I also decided to add a little whole wheat flour too. Even though it’s not called for.

I’m happy to report that I hardly strayed any more from the recipe instructions. Unless you count leaving the kneaded dough in the fridge overnight, because it wouldn’t double after being shaped until way past my bedtime.

Early the next morning, I pulled it out of the fridge to bring up to room temperature. If you can call 15C room temperature. And shaped it into two loaves. They looked to be on the small side. (No wonder. *cough* It turns out that this amount of dough is supposed to make one largish loaf.) 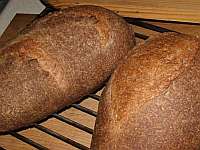 Instead of scissors, I used our serrated long-bladed bread knife to slash. In the past, whenever I have tried slashing, I’ve had problems with the blade sticking. But there are troubleshooting notes in Daniel Leader’s book Local Breads (another recent Christmas present) that came in particularly handily.

Move your blade through the dough with quick, simple strokes rather than dragging it. Wet your knife with water before every slash, because a wet blade will cut through the dough more easily. – Daniel Leader, “Local Breads”, page 102

It’s true that my slashing technique still needs work. But I quite like the look of the results anyway. And the way that the slashes filled in make it so each bread slice is uniformly shaped.

The most important thing to mention though is that this is the best rye bread we’ve had. Thank you, Rose Levy Beranbaum!!

This is what I did to her recipe:

Notes:
* I weighed the ingredients but every recipe in Beranbaum’s book has measurements by weight (grams & ounces) and volume. She also states the final percentages at the end of the recipe. Because our scale does not register fractions of grams, I used volume measures for the small amounts. Beranbaum calls for 1.6gm instant yeast, 18.7gm sugar, 4.6gm malt powder, etc. etc.

**** If you wish to serve warm bread, reheat it after it has cooled completely. To reheat uncut bread, turn the oven to 500F for 5 minutes or so. Turn the oven OFF. Put the bread in the hot oven for ten minutes. This will rejuvenate the crust perfectly. 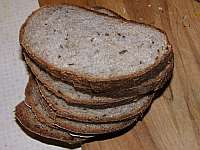 I would love to have tried the bread with butter and sliced radishes. But we didn’t have any radishes…. Initially, I had thought we would be making Reuben sandwiches with it. But T was so thrilled with how light it was that we decided to serve it with goulash and steamed broccoli. It was brilliant!

We will be having the rest of the goulash tomorrow night and there won’t be any rye bread left for Reuben sandwiches. Darn. I guess I’ll just have to make more. (Remind me to make a double recipe.)

3 responses to “Caraway Rye Bread from ‘The Bread Bible’”