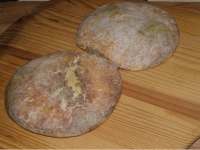 JUST as I suspected! (read about premonition here) Flat as pancakes!

Normally, I love flat bread. But only when it’s supposed to be flat bread. Flat bread that is soft and light and maybe a bit crisp on the outside. Not this flatbread, heavy as a brick, hard as a rock…

Now I’m thinking that this time I didn’t let my starter get bubbly enough before trying to use it. The smell of my (non)starter is wonderful – reminiscent of very mild yoghurt – but, as you can see from the photos, the shaped bread just refused to rise.

As some of you know, this is my second attempt. I tried in April when it was still quite cold. (read about the 1st attempt here) The experiment started bubbling and then fizzled out. I blamed it on the cold.

So this week when it was so insanely hot, I thought I’d try again. Like the first time, I began with rye flour, water and a tiny bit of honey. Then after the first day, I switched to using unbleached all-purpose flour and water for feeding. I soon had plenty of bubbles. I thought everything was going correctly.

I made the bread; it rose(ish); I shaped it; it lay there and its only movement was to flatten out slightly.

I want to blame it on the sudden cool front that swept in a couple of days ago. The temperature in the kitchen has dropped dramatically from around 27C to about 18C.

But on the same coolish day that I began mixing the natural-starter dough, I also made regular bread, using commercial yeast (active dry) That bread dough rose like a fiend and those loaves are spectacular… no photographic evidence, you’ll have to take my word for it.

Hmmm, perhaps I should take up discus throwing….

I do have one good thing to say about the discs: they smell great!! So good that I might even try tasting some. I hope my jaws are strong enough….

I haven’t decided if I’m going to try to get what I thought was a starter to actually change from being a culture to become a starter*. Or if I’m just going go and hide under the bed.

* Susan (Wild Yeast) is an avid bread baker and has just posted about how she captures yeast. It is there that I learned the terms “culture” and “starter”.

It’s not baked through!!

(I tested the inside with a thermometer too and it was well up past 210F in the center.) and talk about sourdough! I’ve decided that I’m going to hide under the bed…

If you haven’t already, please read the sometimes grisly history of my hunt for wild yeast:

2 responses to “care for some flat bread, anyone?”