summary: making pesto doesn’t have to mean using basil; some people’s compost materials are other people’s condiments; freebies from the supermarket; problems with focussing on our cameras;

The other day, one of my west-coast sisters told me about the most amazing dinner that they had on Canada Day: freshly caught salmon with roasted carrots (from their garden) and carrot top pesto on pasta.

It has been rumored that carrot tops are poisonous and potentially deadly, but that’s actually not true. In fact, they are very edible and loaded with vitamins and minerals. There is a persistent belief that the alkaloids in carrot tops make them slightly dangerous for consumption, but this isn’t really true, as alkaloids are a substance found throughout nearly every leafy green vegetable.
[…]
The leafy tops [of carrots], which remind me of parsley, taste herbaceous and vaguely reminiscent of, well, carrots. They can be eaten raw in salads, although their taste can be a little bitter.

– Kelli Foster, Kitchn | Yes, You Can Eat Carrot Tops. No, They’re Not Poisonous!

I moaned about the fact that we didn’t have any carrots growing but maybe we could steal some from M and J’s garden two doors down…. They have LOTS of carrots! They wouldn’t miss a few, would they??

But Lady Luck was kind to us and saved us from becoming petty thieves. 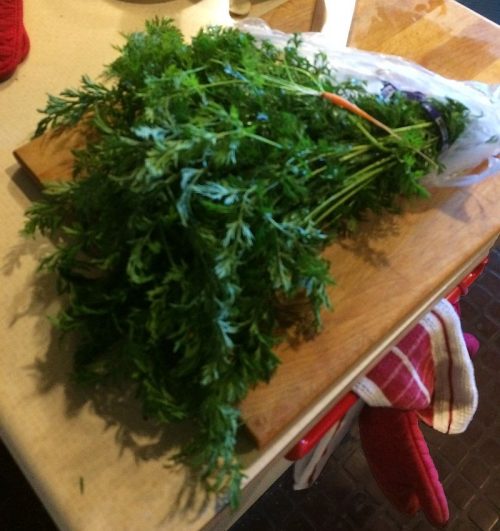 Guess what we had for dinner last night!

We were at the supermarket yesterday to get milk and mayonnaise and had to go through the vegetable aisle to get there. We couldn’t help noticing the employee who was in the process of cutting the tops off carrots before putting the carrots themselves on display. He was about to THROW the tops away!

He looked at us as if we were entirely out of our minds when we asked if we could take them home, then nodded incredulously and said softly and slowly, “Sure….” (We could tell he was happy we were wearing our masks to protect him from whatever mutation of the virus had clearly developed.)

When we got home, we saw that we had an extra prize: a tiny baby carrot was included with all the greens! 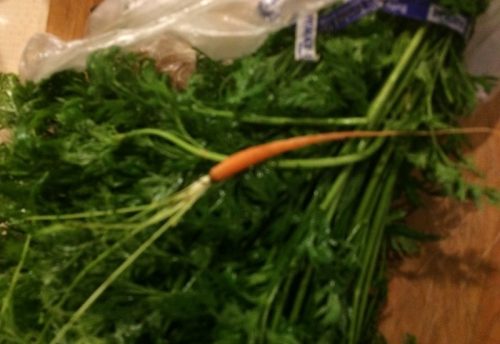 It took quite a few rinsings to get rid of all the sand. And the stems that had been closest to the carrots were quite tough. I had to use scissors to cut them; it was too much work to saw them with even our sharpest knife. And then I got out the food processor.

We did NOT par-cook the carrot tops. Why would we???

We decided NOT to add cheese.

After cutting off the tough parts of the stems and whirring the carrot tops with a good shot of olive oil, a couple of cloves of garlic, salt and pepper, we thought it still tasted a little bit too grassy. (With the exception of the tiny one we brought home inadvertently, the others were not the youngest carrots at the supermarket.)

Reluctant to add sugar, we whirred in a few raisins to sweeten it. And a little water to loosen it up. And more garlic. And more olive oil. And roasted salted cashews. 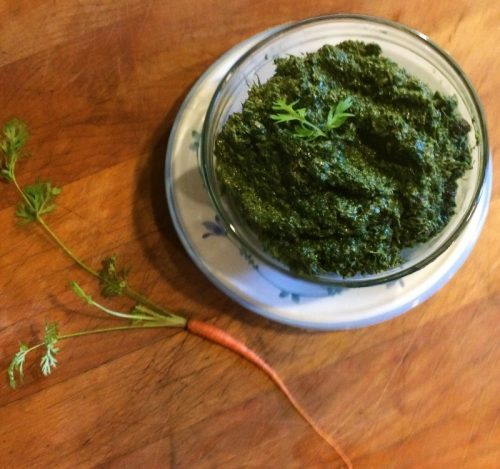 We served the pesto with barbecue wokked sausages, onions, mushrooms, peppers, green beans, and potatoes. Tonight we’ll toss some of the leftovers with potatoes, even though it looks great with pasta in the photo my sister sent of their spectacular looking dinner. 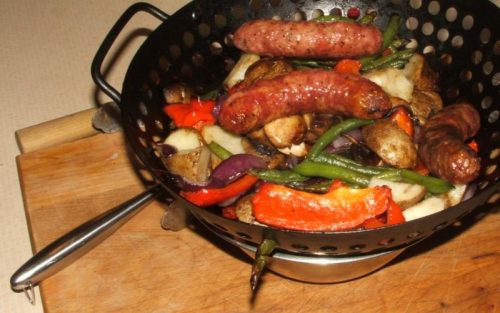 The most thrilling thing about the pesto was that in the couple of hours after making the pesto, the flavours had melded together and it was even better than before!

Thank you, P, for a great idea!

pesto [PEH-stoh] Italian for “pounded,” pesto is an uncooked sauce made with fresh basil, garlic, pine nuts, Parmesan or Pecorino cheese and olive oil. […] This classic, fresh-tasting sauce originated in Genoa, Italy, and although used on a variety of dishes, it is a favorite with pasta. Now there are “pestos” made from myriad other ingredients from cilantro to mint.

– Sharon Tyler Herbst and Ron Herbst, The New food Lover’s Companion, p.510
The word ‘pesto’ comes from the word ‘peste‘ meaning ‘to pound’, which refers to the method of preparation, by wooden pestle and marble mortar. So, ‘pesto’ in Italian actually refers to any number of different raw sauces which have been prepared in this way; it isn’t necessarily all pine nuts and basil. Pesto alla Siciliana, for example, is a pesto rosso which is prepared with the addition of tomatoes, far less basil and almonds instead of pine nuts.

I’m still struggling with the focus on both of our cameras. But especially with the iPhone camera. I had no idea that the focus was completely off on the iPhone pictures I took of the carrot tops! They looked okay when I glanced at them on the iPhone. I was so intent on making Carrot Top pesto that I didn’t check carefully. Ooops.

When T was barbecuing our dinner, the iPhone was being recharged, so I used our ancient camera (whenever we change the batteries, the default date is 2004…) to take photos of the barbecue wok and the pesto after it had been melding in the fridge. Several of those photos were out of focus as well, but at least some turned out okay.

(Surely I don’t have to read the manuals to learn how to use the cameras!

After tonight, there may well be some pesto left still. (Four bunches of Carrot Tops makes a lot of pesto!) If there is, we’ll mix in some grated Parmesan-like cheese to toss it with pasta. 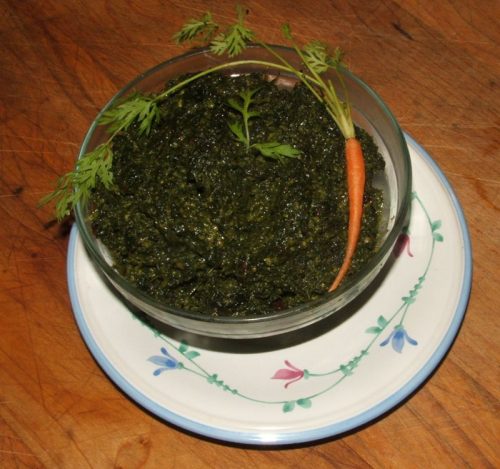