summary: why we had butter chicken instead of curried chicken and what happens to ground cinnamon sticks when they are cooked. Includes a thrilling video. 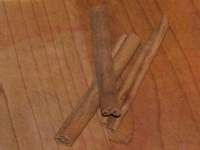 Not too long ago, we were in India town looking to replenish various spices, including cassia bark. We were excited to see actual cinnamon rather than cassia bark for sale so instead of getting the cassia, we snapped up the cinnamon, imagining that real cinnamon MUST be better than cassia.

We were entertaining friends for dinner yesterday and planned to serve naan, palak paneer, beets and fennel seed and curried chicken with dark beer and/or vino verde, followed by one of our favourite desserts, Srikund.

As usual, T made the curry in the morning so there would be time for the flavours to meld. He doesn’t always put cinnamon in (in fact, it’s not listed in our recipe online) but he decided that as we had the real thing for once, it would be fun to add some to this particular curry.

Delicious aromas abounded. And at around noon, he checked on the gently bubbling sauce. I’m sure if you’d been listening, you’d have heard the blood curdling cries coming from our kitchen:

WHY is the curry covered in slime?!

We fished the chicken out of the most disgusting looking ooze. Out went the sauce into the wet garbage. (Sorry, no photographic evidence of the sauce. We were too busy coughing, gagging and spewing.) We then assessed the chicken and decided that it was one thing to rescue it and serve it to us but quite another to do the same for guests. So, as I was mixing naan dough, out T went to get more chicken.

And switched to making butter chicken. Without cinnamon.

And once that was nicely bubbling and looked and smelled juuuust right, T could take a moment to rack his brains to try to figure out what he had done differently with the curry – as he said, “In 20 years of making curries, he has never had such a spectacular failure“. The only thing he could think that was different was the cinnamon. 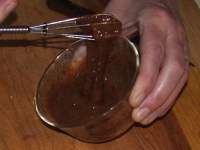 To prove that it had to be the cinnamon, he ground some up, added it to water and brought it to a boil. This is the result.

Or Cinnamon Muselage. At least that’s what it makes me think of. “Cinnamon Muselage ” seems somehow just vaguely less queasemaking (yes, I know; that ISN’T a word) than “cinnamon snot”, doesn’t it?

And the clear winner is: Cassia bark.

The cinnamon sticks are composted now (I hope they don’t ruin our compost heap!) and we’ll be bicycling out to Indiatown soon to get some cassia bark. No more cinnamon for us, thank you very much.

Just curious, has anyone else ever had this problem with real cinnamon in a curry? 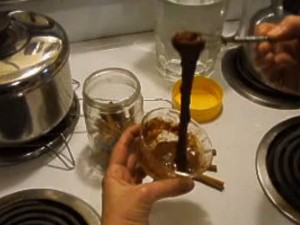 Oh by the way, the final dinner was delicious (no photos – we were too busy stuffing our faces). And the cinnamon snot made for a most thrilling pre-dinner demonstration. So thrilling that our friends suggested we take a video so everyone could get the full effect.

Please take a look at the video we took. (Feel free to add your own sound effects.)

Read more about cinnamon and cassia:

edit 16 June 2008: It turns out I’m not the only one who has had this experience. Take a look at this blog entry (great photos of cinnamon slime!):

16 responses to “cassia vs cinnamon”