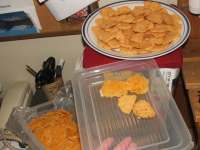 Yesterday, I added more flour to what was left of the “double recipe of everything but the flour” cheese cookie dough.

Hmmmm, maybe I added a bit too much flour (*cough*). I had a devil of a time encorporating it into the lightly floured cheese and butter. Had to knead a lot. Too much. (I’m pretty sure this is one of those recipes that one shouldn’t mix TOO much.) Had to add some water so the dough would roll into a log….

The cookies in the container on the left are the first not-enough-flour version and the ones on the plate are the almost normal version, not quite as light and fluffy as they are supposed to be but still pretty darn good.

But at least the rescued cookies didn’t spread out so badly when being baked. And they really do taste good. Not quite as good as the light and fluffy ones I have made in the past. And even the first complete failures are pretty good if you don’t mind the idea of having to be rushed to emergency because of having a major gall bladder attack….