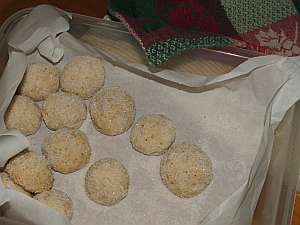 We have brilliant neighbours. One of their brilliances is that, unlike me, they know about planning ahead. A couple of weeks ago, I got a phone call:

she: [dryly] It’s almost December… what do you say we bake cookies together so we can have more kinds?

me: What a great idea!

she: Okay. Let’s start with coloured cookies. And then cherry rum balls and crescents. How does this Tuesday and next Friday look?

And so we got cracking. My sister came over too and we spent a wonderful morning together making coloured cookies (did I take the camera with me?! Of course not!) But rest assured that the cookies we made were as stunning as previous versions.

Then this past Friday, we tackled the chocolate covered cherry rum balls, crescents and cherry snowballs. Except after hearing that one of the ingredients for the rum balls was dried cherries, I got to thinking about cherry snowballs and that cherry snowballs didn’t HAVE to have Maraschino cherries in the centers.

Mum always bought red, green and yellow cherries. I found the red cherries to be fractionally more appealing than the green and yellow. But it was a pretty well known fact that I hated the cherries.

It was an equally well known fact that I loved the cookie part of cherry snowballs. And so one day in late December, when I was about 10, Mum came to me with a stern look on her face. She showed me the large handful of Maraschino cherries with tell-tale crumbs of cookie attached.

she: Look what I found shoved down behind the chesterfield cushions. What can you tell me about these?

she: Hmmmm…. if you don’t want to eat the cherries, you’re not to take a cherry snowball.

Well. I was mortified. On two counts: a.) it really wasn’t me; b.) if it had been me, I wouldn’t be so stupid as to hide the cherries behind the chesterfield. I’d have hidden them strategically in the garbage under the coffee grounds where they’d never have been noticed.

At last, the truth was revealed.

Through all the glee came the laughing words “that was me!!” from one of my sister’s friends. I can’t tell you how relieved I was. Finally, my innocence was proclaimed. Finally, the story could be put to rest.

Or not. Every so often, over the years, as people help themselves to cherry snowballs, they are cautioned not to hide the cherries in the chesterfield the way I allegedly did when I was 10.

Scarred as I am from all this, I can still think of cherry snowballs with fondness. But THIS year, nobody will be required to hide the cherries in the chesterfied. THIS year, I made the cookies with dried cherries.

After testing the first tray of cherry snowballs that came out of the oven, we made an executive decision to make only cherry snowballs. Maybe we’ll make crescents next year…. 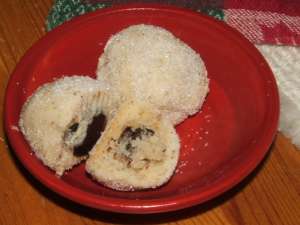 The only thing I’d change would be to put two cherries into each cookie. In fact, the cookies are so wonderful that I’m thinking that I might have to eat all of them myself.

Yes. That’s what I’ll do! They’re all mine!! Because I deserve them.

If you want some, you’ll have to make them yourself. Here’s the recipe:

A few years ago, Susan (Food Blogga) put together a cookie swap event to showcase the various Christmas cookies made in our blogosphere:

I WOULD have included cherry snowballs at the time. Better late than never….

Remind me to rave about and take a photo of Tr’s fabulous chocolate covered rum balls!

Also, please remember to look at my annual Advent calendar (but don’t even THINK about peeking ahead).