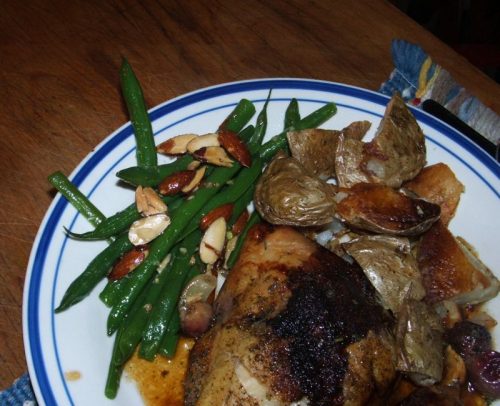 The other day, our brilliant neighbours phoned to ask us if we would like the half a bottle of 2015 Castelforte Amarone della Valpolicella – left over from the evening before – that they weren’t going to drink.

Us? Drink red wine? Naaaah! But, just to do them a favour, we said yes.

We decided we’d serve it with roast chicken. Then, yesterday, after T had just watched Jamie Oliver’s “Quick and Easy Food” (Series Two, Episode Three: Sea Bass & Chicken Surprise), he announced that we had to go out to get some red and green grapes, and a bottle of vermouth for making last night’s roast chicken dinner.

As we were looking at the grapes, we simultaneously made the executive decision to buy only red grapes. What difference could the green grapes make to the final dish anyway?

There were beautiful looking green beans right beside the checkout counter. We already had some broccoli in the fridge, but it would keep. Green beans seem like the perfect accompaniment for roast chicken. Especially if they are served with a little butter and some toasted almonds!

Jamie Oliver calls for whole garlic cloves, grapes, red vermouth, and fresh tarragon to make the chicken. He also says to use a “non-stick ovenproof frying pan”. We have all that: it’s called cast-iron.

2. Put a non-stick ovenproof frying pan on a high heat. Rub the chicken all over with ½ a tablespoon of olive oil, season with sea salt and black pepper and place skin side down in the pan.
3. Fry for a couple of minutes until golden, then lightly squash the unpeeled garlic cloves with the heel of your hand and add to the pan. Pick in the grapes.
4. Turn the chicken skin side up, pour in the vermouth and transfer to the oven to roast for 40 minutes, or until the chicken is golden and tender, and the sauce is sticky and reduced.

So T used our square pyrex casserole dish instead. He put the chicken skin-side up (without olive-oiling it first) into the dish, added the garlic, tarragon, and vermouth to the bottom of th dish and roasted the chicken until it was a beautiful golden brown. Then when it came time to reduce the sauce, he put it into our stainless steel frying pan (too much acid for the cast-iron pan) and used the stove to reduce the sauce to a beautiful sticky glaze after the chicken was roasted.

He also peeled the garlic cloves; they’re easier to eat that way.

Along with green beans, we served the chicken with oven-roasted potatoes. 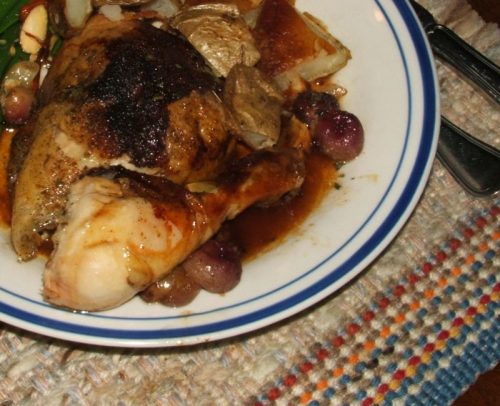 We LOVED this dinner!

We’ll definitely be making it again. Just imagine how fabulous it will be in late August when it’s made with tarragon from the garden and grapes from Niagara!

I know. Fresh grapes aren’t exactly in season here either. But they were beautifully sweet. We just couldn’t say no. 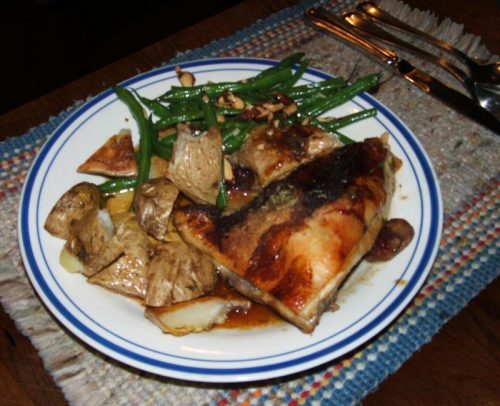