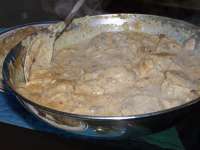 Oh Boy!! Another dish that looks like dog’s breakfast! Don’t let the looks fool you though! This is absolutely delicious.

It was all because of Jeanne’s (Cook Sister!) recent post about finding chicken livers at her neighbourhood market that I started to vie for us to have “Chicken Livers Maryland”. Granted, we don’t have it often. Generally, if we buy chicken livers, it’s to make chicken liver pâté.

But knowing how much I love “Chicken Livers Maryland”, (not to mention that the incessant wheedling was getting on his nerves) T made it for our Valentine’s Day dinner. 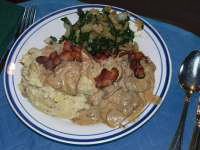 Who needs a dozen roses!! “Chicken Livers Maryland” might not look quite as beautiful on the table as a vase of roses but it is so much better tasting!

I was introduced to this wonderful dish at a brunch buffet when I first moved to Toronto. I loved it. The hostess graciously gave me the recipe. I have no idea where the recipe originally came from – I’m guessing something like Better Homes and Gardens or Redbook.

Of course, over the years, we have made little changes to the recipe and it’s likely that it doesn’t have a whole lot to do with Maryland any more. Nevertheless, it’s still great; I doubt that the “Chicken Livers Maryland” Police will not be coming after us for ruining their dish. If anything, it’s even better.

The original recipe calls for canned mushroom soup and sour cream. We have used yoghurt instead of sour cream. On Valentine’s Day, T made mushroom soup from scratch by sautéeing onions and mushrooms, making a roux and then adding milk and chicken stock. As we didn’t have any sour cream, he used a bit of cream cheese to add richness – as if it really needs more richness.

He also threw in a few pink peppercorns.

Did I mention that our dinner was delicious? And we had plenty left over to make a very elegant breakfast a couple of days later – serving the chicken livers on toasted caraway rye bread with hard-boiled eggs on the side. And good strong coffee….

This week, WHB#71 is hosted by Anna (Anna’s Cool Finds)

I know. I know. This is “Weekend Herb Blogging”. And a pink peppercorn is a spice. (I have always considered that herbs pretty much have to be leaves and that the fruits of the plant are spices.) But luckily, Kalyn isn’t absolutely strict about having to feature an actual herb for WHB. She allows anything as long as the post is about an 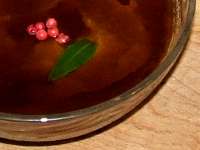 We buy it dried in jars and use it mainly for decoration, especially for garnishing chicken liver pâté.

It’s not just for looks though. We like to add pink peppercorns to oven roasted lemon chicken, based on a Frugal Gourmet recipe (skinned chicken pieces, lemon juice, olive oil, thyme, garlic, pepper, NO salt – all baked at about 350F until the chicken is done, then the juice of a lime is squeezed over top). This was served for our wedding lunch. It’s delicious just like that with rice. I still can’t get over the fact that one doesn’t miss the salt! It’s also wonderful to make gravy from the pan juices and serve the chicken with mashed potatoes. The flavour of the pink peppercorns does come through, lending a delicate, slightly earthy, citrus-like flavour.

The bushy shrublike plant grows wild in Florida (it was introduced as an ornamental sometime in the 1800s), so it is possible that it could be grown in the kitchen garden (obviously in pots to be brought indoors and out for those of us who get even the remotest hint of frost in the winter). It is apparently a fast grower, grows in any soil and tolerates drought. Richters Herbs sells the seeds. A word of caution: the plant is considered by many to be invasive:

Although the plant is still grown as an ornamental in California, Texas, and Arizona, S. terebinthifolius is classified as a state noxious weed in Florida and Hawaii

If you would like to participate in or learn more about Weekend Herb Blogging, read here: