The hero warrior Isfandiar is said to have eaten the seeds of the pomegranate and become invincible – Yasmin Khan, The Saffron Tales

After that [Zartusht] gave to Asfandiar of that feast one grain of a pomegranate. He ate and his body waxed like stone; no wound could be inflicted upon him. – Zartushi-Behram (Eng. translation: E. B. Eastwick, Esq.), Zarthusht-Nameh (“Book of Zarathushtra”), 1277 A.D. 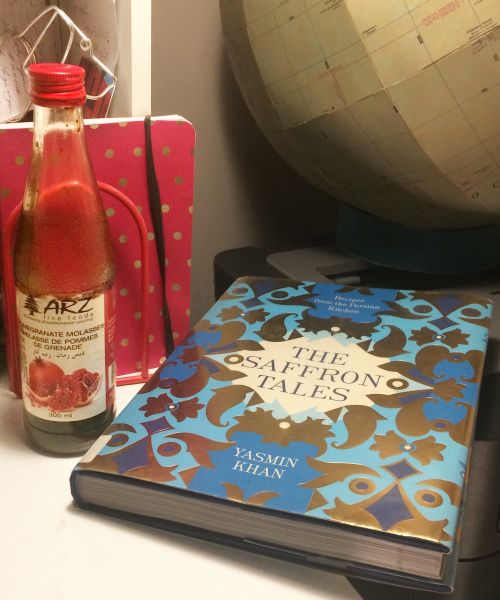 Alas, while pomegranates are available here from time to time, they come from very far away and are rarely as thrilling as we think they should be.

They’re also very very expensive. Even when they look a little worse for the wear.

To get a bit of a pomegranate fix, eons ago, we bought a bottle of pomegranate molasses. I can’t remember what we used it in. All I remember is that we weren’t wild about the flavour. After that first taste, the bottle stood untouched in the cupboard for months before one of us – again, I can’t remember who – decided we should just throw it down the drain and recycle the bottle.

So. What was it that made us decide we had to get another bottle of pomegranate molasses to try it again? Perhaps it was after reading “A Taste of Persia” by Najmieh K. Batmanglij, or “Taste of Persia” by Naomi Duguid, or “Samarkand” by Caroline Eden and Eleanor Ford, or “Salt, Fat, Acid, Heat” by Samin Nosrat.

That’s right; we cannot stop reading about Persian cuisine. I think it has something to do with the magic of pomegranates.

Or perhaps it was because of a few months ago (in February!! …how can it be May already?!), when T was watching Milk Street on TV and saw what looked to be the best ever way to prepare chicken. 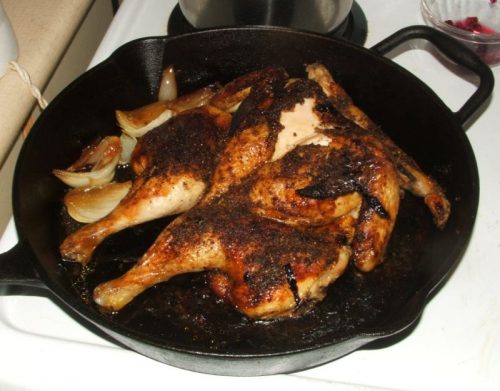 This meal-in-one is our adaptation of a recipe in “The Palestinian Table” by Reem Kassis, which she prepared for us on a recent trip to Galilee. In lieu of seasoning the chicken and potatoes with the Kassis family’s nine-spice blend, we make a simpler mixture from a few select ground spices. And to make a simple but flavorful sauce, we roast a handful of garlic cloves with the chicken and potatoes, then mash the softened cloves directly on the pan before deglazing with water. Dark, syrupy pomegranate molasses has a fruity, floral, tart-sweet taste that complements the fragrant spices and as well as the caramelization that results from roasting.

We did alter the Milk Street recipe a bit. We didn’t add any potatoes, and instead of adding whole garlic, we put a quartered onion into the pan.

Wow. This chicken was great!

It was particularly great with T’s mother’s recipe for braised red cabbage and raisins, and Reshteh Polow – garnished with pomegranate seeds. Of course, we had to have pomegranate seeds (the supermarket sells them in the freezer section). Not only do they taste lovely, but I love the way they look like jewels. 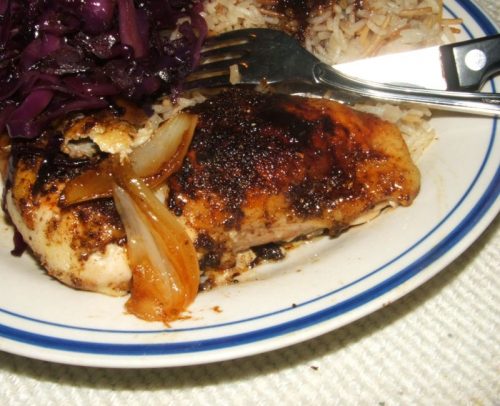 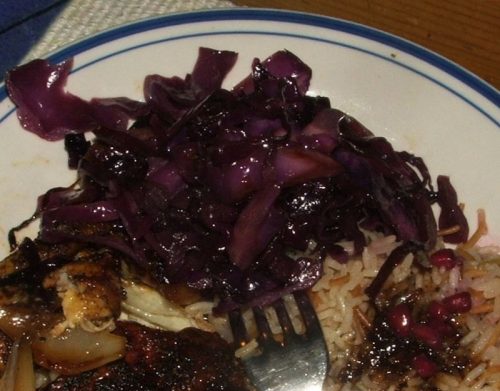 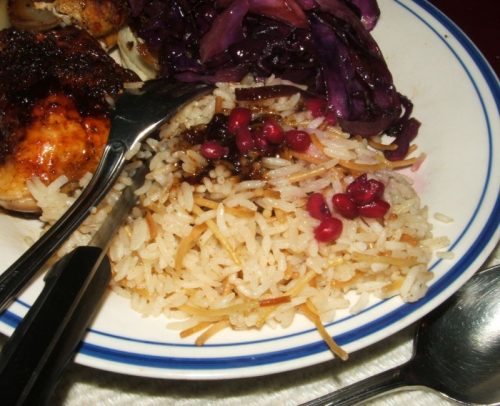 After this magnificent repast, we felt invincible! Pomegranates ARE magical.

The Milk Street chicken recipe has led us to our latest read-aloud-before-dinner book: “The Saffron Tales” by Yasmin Khan. It is lovely.

When I was little and living in Iran, I used to sob my heart out each morning as my mother got ready to leave for work. Clinging to her legs, I would beg her not to go, and, to appease me, Mum would explain that she needed to go to work to earn money so she could buy me some pomegranates. I practically pushed her out the door when I heard this. […] I had a knack for vigorousy rubbing the leathered skin of the fruit between my hands, listening to its ruby seeds quietly pop and crunch beneath my fingers, until the pomegranate was soft and pulpy enough for me to tear a hole in one end and squeeze its scarlet juices into my mouth.

When no one is looking, I’ve been known to sneak a teaspoon of homemade pomegranate molasses from my grandmother’s fridge, relishing its pucker-your-lips sharpness.

As soon as the restrictions lift, we’ll take a trip up to Super Tehran supermarket to see what kind(s) of pomegranate molasses they have. I’d love to find one that has no sugar! 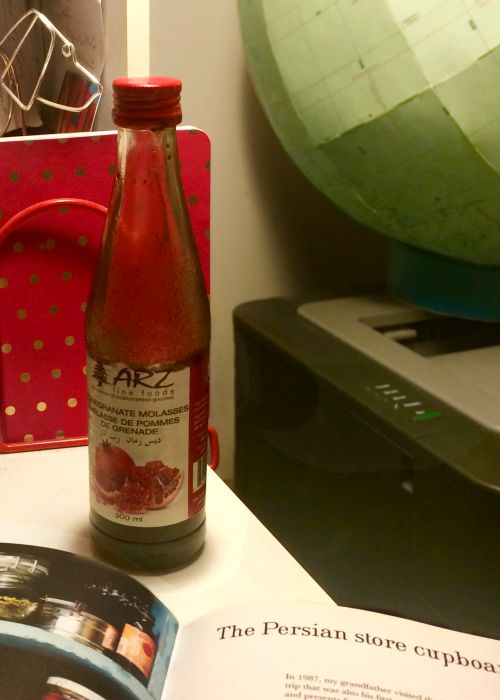 10 THINGS TO DO WITH POMEGRANATE MOLASSES
We all know what it’s like to buy an unfamiliar ingredient for one recipe and then be stuck with ideas for how to use it again. The said ingredient usually finds itself relegated to the back of your kitchen cupboard, gathering dust until it quietly passes its sell by date and you can justifiably throw it out without feeling guilty. Or is that just me?
Well, fear not, if you invest in a bottle of pomegranate molasses you’ll never face such woes.

– Yasmin Khan, Yasmin Khan Stories | 10 Things to do with Pomegranate Molasses, 22 November 2014
Pomegranate molasses is thick, sticky syrup made from cooked-down, fresh pomegranate juice. […] As the sweetness of each batch of pomegranates will differ, it is rare to find two bottles that are the exactly same, and brands vary massively considerably too, so it’s worth shopping around to find the one that tickles your particular taste buds. […] As a rule of thumb, I find Turkish varieties almost always have added sugar, which makes them quite sweet, while Arabic brands tend to be lighter in consistency

We’re just a little bit over half-way through, and already have several recipes bookmarked. The other night, when we had had had the altered Milk Street chicken again, we read about mixing yoghurt with pomegranate seeds and mint. Too bad! One day too late. And the mint that has just emerged in our garden is stunningly beautiful right now. Next time….

(Remind me to rave about how good this chicken is when cooked on the barbecue!) 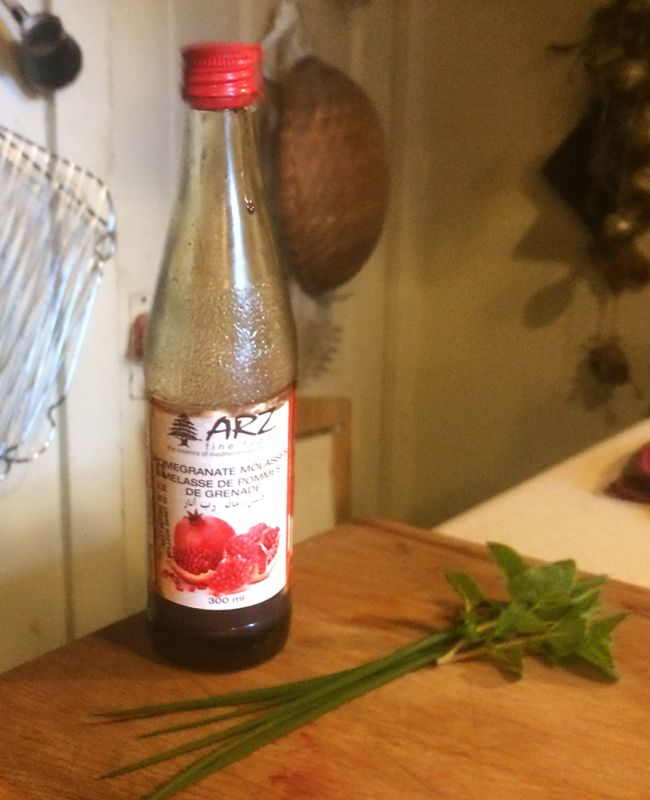 The photos of the pomegranate molasses were taken a couple of days ago, which is why the bottle is only about a quarter full….