summary: recipe for chili paste based on a recipe in “Mangoes and Curry Leaves” by Jeffery Alford and Naomi Duguid; hard boiled egg party trick; EoMEoTE limerick; information about EoMEoTE; (click on images to see larger views and more photos)

edit 1 February 2006 12:53 EST:
Oh sure. NOW Cooksister! announces the theme for EoMEoTE#14. It is poetic injustice hmmm. I’ll have to see if I can somehow edit this so that it fits into the new theme… although… I might be able to argue that it is poetic injustice that the announcement came SO late.

click on images to see larger versions of photos 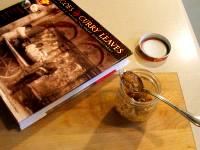 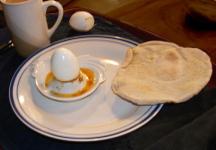 We just tried the most fantastic recipe for ‘hot chili oil paste’ that we read about in Mangoes and Curry Leaves by Jeffrey Alford and Naomi Duguid. They say that they first tried it with hard boiled eggs and that it is now one of the standard condiments in their house. Well, we had to try it. And how fitting that we were reading about this right near the end of the month – just in time for EoMEoTE#14 (at least I think it’s taking place this month) Not to mention that we also just discovered the most amazing way to take the shell of hard boiled eggs**. I mean really. Could the timing be more perfect for EoMEoTE?

The chili paste called for green onions, which we didn’t have. But we weren’t going to let that stop us. Onions are onions. So we used regular cooking onions and added a couple of green chilies for colour.

Serve with hard boiled eggs. It is also good as a garnish for soup or rice.

We boiled some eggs and OH MY!! This really is the best thing for hard boiled eggs!! I want to have hard boiled eggs EVERY day! Oh yes, and the requisite “toast” for EoMEoTE? We had pita bread.

* Because there has not yet been an official announcement from Cook Sister! about the theme for this month’s EoMEoTE, I have made an executive decision and decided that this month’s theme is Party Tricks – because there is a big party at the end of January. (There must be a big party somewhere! Oh yes!! It’s Chinese New Year….)

** Hard Boiled Egg Party Trick: Rap the hard boiled egg on both ends. Remove a tiny amount of shell from the narrow end and some of the shell from the large end. Making sure that you have sealed any side holes and blow on the top end. The egg pops right out of the bottom part of the shell. Really. You’ve GOT to try it!

yet another edit 2 February 2006 10:47 EST:
Here is the wonderful movie we were sent via email showing the egg peeling in action. Take a look!
We tried the chili paste in some left over Asian style chicken soup. We didn’t have noodles on hand but there was some left over rice in the fridge. Yup, chicken rice soup (Asian style) with Indian chili paste is FANTASTIC!

And last night we had a Bengali fish curry, rice and steamed green beans. We thought it would go well with the green beans. It was good, no doubt. But I have to say that lime pickle was a better complement.

My egg is cracked at both ends

My egg is cracked at both ends
I have to hold it tight
So one, two blows, and
oh, my friends –
It pops out oh so right