summary: meat korma, puffing corn chapatis (based on our recipe for corn tortillas); staying at home gives more time for experimenting in the kitchen; getting inspiration by re-reading back-issues of SAVEUR Magazine; 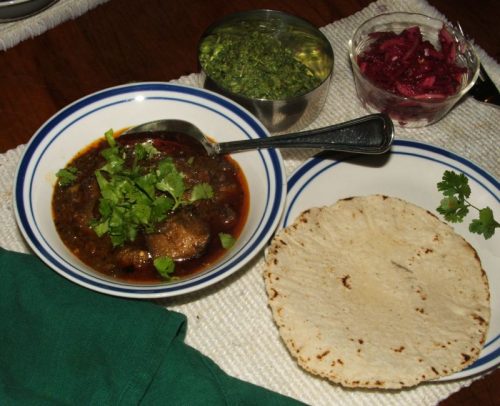 In no particular order, T has been gradually re-reading our back issues of SAVEUR magazine. As he read SAVEUR No.102 (May 2007), “Stars of India: Indian Classics” by Margo True (with the most beautiful photos taken by the inimitable Penny de los Santos), he noticed a photo of goat curry swimming in oil.

India is teeming with cuisines and subcuisines, yet those of us in North America mainly know only two of them: rustic village cooking from the Punjab and the extravagant court cuisine of the Moghul emperors, both from the northern part of the country. […] In 1913, more than 30 years before Moti Mahal introduced tandoori food to Delhi, a Muslim cook named Haji Karimuddin set up a food stall called Karim’s near the Jama Masjid, the largest mosque in India. His ancestors supposedly cooked for the entire line of Moghul emperors, starting in the 16th century, and Karimuddin served the kind of delicate Indo-Persian cooking that epitomized that court’s cuisine. […] Located off a lane lined with gritty food stalls and heaving with humanity, stray goats, and squalling autorickshaws, Karim’s still does a terrific business. To find it you have to look for a small red sign opposite a narrow opening between buildings. Duck through that tight passage into a pocket of warm, spicy, meaty aromas, where you’ll find a tiny courtyard ringed with small dining rooms and a hodgepodge of open kitchens. Directly in front is an elevated platform where breads, including the amazing roomali roti — as thin and soft as a fine muslin handkerchief — are baked. The platform is surrounded by metal pots on burners, in which simmer various meat and vegetable specialties (the oily and delicious goat korma, dark with browned shallots, is a big seller; the burra kebab, a meltingly tender roasted lamb chop, is another). 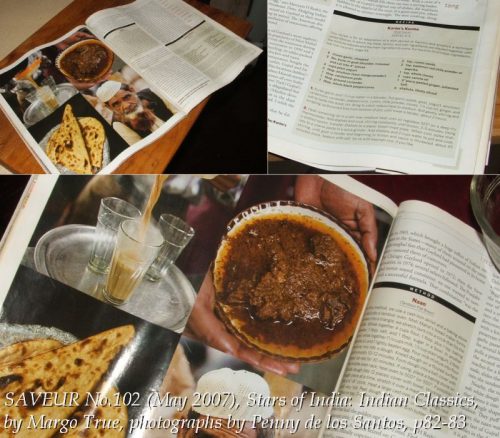 And T suddenly announced that he would make Indian-style curry – something like Karim’s Korma – for dinner that night. Then came the question: did I want to have chapatis? Or naan?

I chose naan. How could I not?

Naan!! Yes! Because we thought it has become warm enough to fire up the grill.

Well, not completely wrong. It has become warm enough. But it got cold and cloudy again that particular day.

So we made a sudden change of direction and decided on chapatis. But not the usual “thin and soft as a fine muslin handkerchief” chapatis. T said we would make corn chapatis….

Whenever we’re making them, we’ve always remarked that chapatis are very much like flour tortillas. And in this “stay at home” time, we’ve been having a lot of Indian food lately (a curry is so versatile – it can be served on its own with chapatis, naan, or rice; or it can be turned into biryani).

To be sure, our corn chapatis might not be exactly Indian-style. We’re Canadian. We made the chapati dough with masa harina, purchased from the South American grocery store in Kensington Market.

We’ve often made corn tortillas. But, try as we might, they never puffed the way that wheat chapatis do! Even though corn tortillas allegedly puff.

The internet search was on! And we thought we found the answer on Chowhound:

Homemade corn tortillas (even made with maseca) do puff. That’s your main goal when cooking them because it makes a huge difference in the texture. For years and years mine never puffed until I read a blog where it explained water content, griddle temps, and flipping times perfectly. Now they puff every time

Tricia Martinez, Chowhound | Home made Corn Tortilla.Can’t get em to puff up? 22 July 2015

Well, thanks, Tricia. Too bad you don’t point to where the blog is, or what the perfect flipping times are.

And so the search continued…. Aha!! Of course. Food TV shows us how:

Rick Bayless also shows how to get corn tortillas to puff, but we think Patti Jinich is much more charming to watch. Besides, Rick Bayless calls for using water from the hot water tap. (Oh my. DON’T get me started on that!) 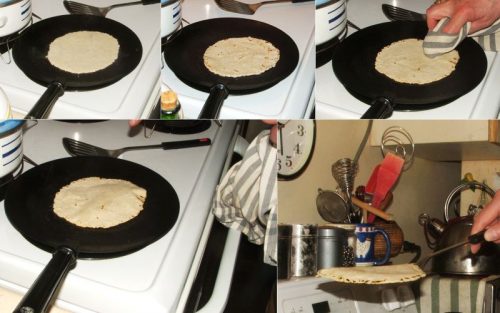 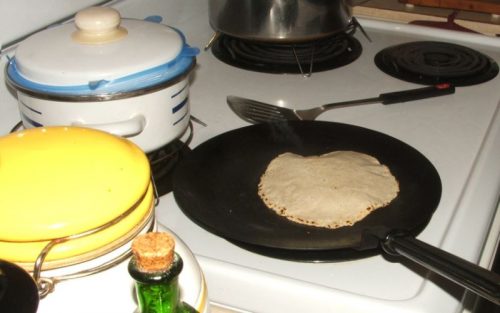 The pot with the stretchy blue silicone lid (from a Thetis Homes 6 pack given to us by my sister – thank you, B!!) is placed over very low heat on a footed wire rack to store the cooked chapatis that are also resting on a wire rack placed inside the pot – note that if they rest directly on the bottom of the pot, they get soggy. But on the spacer, they stay beautifully soft and pliant. (The silicone lid is there to block the vent hole in the actual pot lid.)

The amounts we used to make the chapatis – using white masa harina (because we can’t easily get yellow) – are from Chuck Hughes’ (Chuck’s Day Off) tortilla recipe. But further reading and YouTube video watching recently told us to use hot water for mixing, and to turn the tortillas 3 times rather than twice. Pati Jinich’s video explains the technique really well.

And, once again, we ate like Royalty: meat korma, rapini saag, beet salad, and the best ever corn chapatis. Not crispy like crackers, though. They weren’t quite handkerchief-thin like the wheat flour chapatis either, but they were soft and pliable. And delicious. 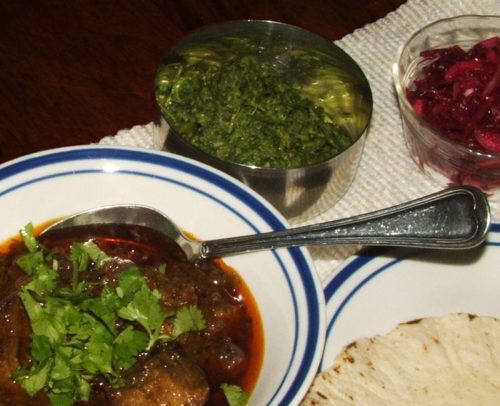 Thanks to SAVEUR for the introduction

When we were still subscribing to SAVEUR Magazine, we were always thrilled to see Penny de los Santos’ photographs. She is the best!! 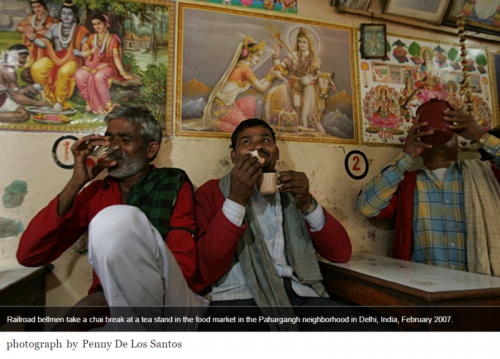 photo: Penny de los Santos
(above photo from NPR: The Appetizing Art Of Food Photography)
SAVEUR Magazine No.102 included the left half (just the two men on the left) of this wonderful photo as a full page display on page 80 in their “Stars of India” article.
A Stay at Home Game

The following was floating around FB: You’re in lockdown. The only food items you have to survive are items starting with the letters of your 1st name. What is keeping you alive?

This could be fun.

Oh wait!! I might not be able to have pie, but I can have Tarts! What a relief!