recipe: Corn and Potato Chowder made with barbecued corn on the cob 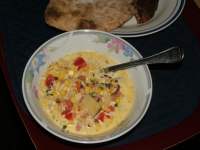 I believe that I promised to post about corn chowder…

We weren’t at all concerned about the chicken. That would make a perfect dinner for these hot evenings. But the corn. What to do with the corn?

Initially, we were going to cut the niblets off and freeze them to add to black bean soup sometime this winter. And then we thought… what about corn chowder?! Yes!! Corn chowder would be perfect to have with cold chicken.

It turns out that corn chowder made with barbecued corn is so fantastic that we are always going to arrange to have left over corn!

This can be made ahead; it is great heated up the next day.

recipes from OUR kitchen – Soups & Stocks