summary: recipe for corn tortillas from scratch; no need for a tortilla press; information about Bookmarked Recipes (click on images for larger views and more photos)

Before now, we have always bought pre-made corn tortillas because we didn’t have a tortilla press. It turns out that it’s insanely easy to make really good tortillas from scratch WITHOUT a press. 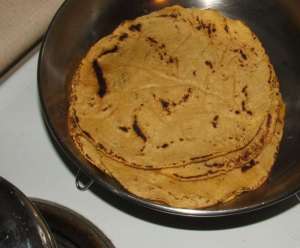 Every time we go to our favourite South American store in Kensington Market to get dried chillies, pinto beans and/or pre-made corn tortillas, as T is waiting in line to pay, I go to the shelf with the tortilla presses and gaze at them longingly. They have not terribly expensive cheap-looking cast-aluminum presses and expensive beautifully constructed heavy heavy heavy cast-iron presses. And I think how cool it would be to make our own tortillas.

But by the time I think that maybe, just maybe, this time we’ll take home a tortilla press, we’ve already paid and it’s time to go.

The last time we were at the shop, we came even closer to buying a press. Because that time, after seeing Chuck Hughes (Chuck’s Day Off) making tortillas by whacking a ball of dough with the flat of a frying pan, we decided to buy a small bag of Masa Harina and try making our own tortillas. We asked for tips on making them and as one fellow was telling us how much water to put into the dough, one of the other guys whipped over to my favourite shelf and hauled the larger cast iron press off the shelf and brought it to the counter.

They were going to ring it up too. But we nixed it. We said we’d give it a try with a heavy frying pan first.

Well! NOW I’m glad we didn’t spend the money. It turns out that we don’ need no stinkin’ tortilla press!

And we don’ need no stinkin’ heavy frying pan either. The bottom of a cake pan works perfectly. Yes, it’s true. It takes a little bit longer because each tortilla has to be pressed 3 times instead of once. Even so, it takes less time to press a tortilla than to cook the already pressed one.

But this wasn’t the case, initially. The first few tortillas took AGES to flatten because we were putting the ball of dough between two plastic sheets (a cut open vegetable bag) and using a rolling pin to flatten the ball.

This is what I do w/out a tortilla press: Place one ball on the slab or granite. Cover with a sheet of plastic (I use a gallon-size baggy) and press down with a heavy pot. You’ll have a nice circle of dough now. I then continue to roll it to the thickness I want with a rolling pin (over the plastic). This doesn’t leave perfectly circular edges…but if you know me at all, you know I love rustic food…and they look totally rustic. I then use a bench scraper to lift the dough from the granite slab and lay it onto the pipin’ hot comal. If you don’t have a slab or granite, use a sheet of plastic on bottom and top, and use the same process. You should be able to peel the rolled dough from the plastic instead of using a bench scraper. If you have a tortilla press, simply line w/ plastic on both sides and press. Pfft…easy. 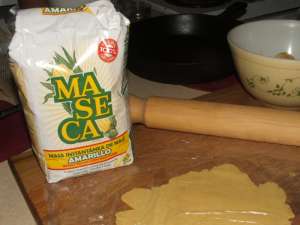 But I’m getting ahead of myself. First, we used the big rolling pin. Then we tried the small rolling pin. Each time, as soon as the rolled tortilla seemed thin enough, it WOULDN’T come away from the plastic without ripping and tearing. 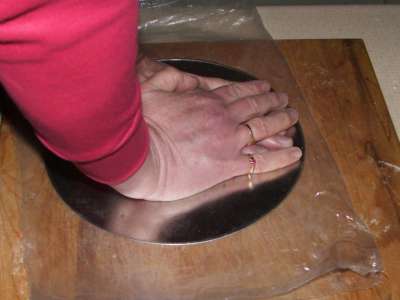 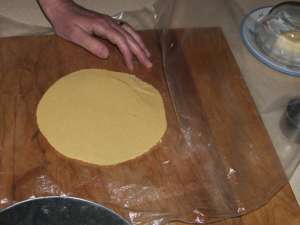 It works brilliantly. AND the edges aren’t quite so rustic.

Stay tuned for the corn tortilla making video!! (I’m in the process of splicing bits together.) 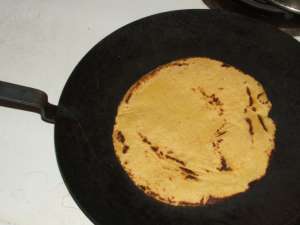 Cooking was fun too. We used our tava (carbon steel pan for cooking Indian flatbread) to cook the tortillas. But I suspect a cast-iron frying pan would work as well. Chuck Hughes (“Chuck’s Day Off” Food TV Canada) says to use a “hot dry skillet“. Heather’s (All Roads Lead to the Kitchen) recipe says to put a heavy comal or skillet “over med-high heat. It should be smokin’ hot (~425 degrees F)“. SAVEUR magazine says to “heat a dry cast-iron skillet over medium heat until hot but not smoking“. We found that method was best to have the heat at medium high – just a little hotter than for making pancakes: 4.5 on our dial.

Here’s what we did to make the tortillas:

Serve with mole or beans or salsa or…. 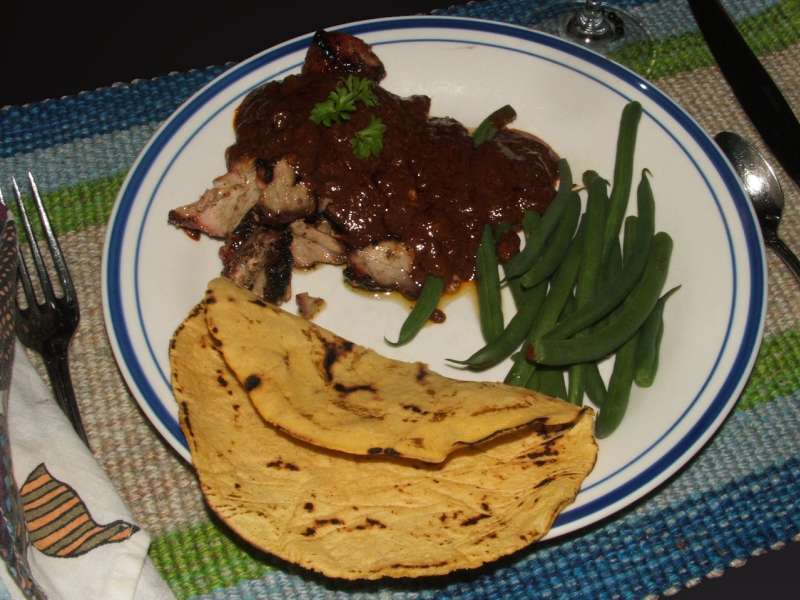 The tortillas were also fabulous with refried beans. Nope, no photographic evidence of the vegetarian version. I’m afraid we were too busy eating. 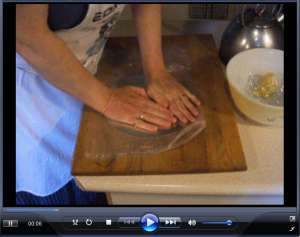