summary: recipe for Cuban Bread based on a recipe by Bernard Clayton; information about Bread Baking Babes and YeastSpotting; (click on images to see larger views and more photos)

Call me Thomas. Yes, even though I saw the other BBBabes’ Cuban bread, I still didn’t believe it. 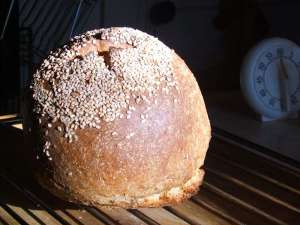 But that’s what the recipe claims. And I just proved to myself that it’s true.

So. Next time someone says “But I don’t have TIME to make bread from scratch!!” I can point them to this amazing recipe.

Saturday 7 January 13:01: I took a look at the recipe. Doubting as ever, I had a few questions.

The recipe calls for “hot water” to be added directly to the yeast. From what I understand about yeast, the water temperature should be below 120F because yeast begins to die when the temperature is higher than 120F.

The recipe calls for volume measures. Because I’m a freak (and I love using my digital scale) I worked out the measurements in grams:

I haven’t decided yet whether I’ll measure in cups and spoons or by weight.

However, I can’t help but report that in my frenzy of working out the weights, I also worked out the percentages:

Still as doubting as ever, I decided I would be making half the recipe. My official reason is that we don’t have room in the freezer for the extra loaf of bread. And then, even though the bread allegedly took no time at all to make, I put making it off for tomorrow.

Because we all know: it’s best to put off for tomorrow what could easily be done today.

Sunday 8 January 08:40: My first and biggest problem was how to find somewhere in this house that was between 26 and 37C. Now? In the dead of winter? With the kitchen generally between 12 and 15C?

The only viable place was the oven. I turned the oven light on and stuck a roasting pan full of hot water onto the bottom shelf. Then, for good measure, I turned the oven on briefly to its lowest temperature and then virtually immediately turned it off again and went to get out the ingredients.

When I was measuring, I REALLY wanted to use my new digital scale. But I decided that as Clayton had specified volumes and was so loosey-goosey about amounts, I’d stick with dull old measuring cups.

Hot water? Oh my. I simply won’t use hot tap water. Not with our ancient pipes. I put filtered water into a little pot and gently warmed it as I got out the dry ingredients.

Ooops!! The water came to a boil. Too hot, too hot!! (Yeast starts to die when the temperature is higher than 120F/48C) I set it aside to cool. That was no problem in our kitchen that is around 15C….

I couldn’t refrain from making just a few changes to the recipe. I threw in a cup of whole wheat flour. I toyed with adding some oatmeal too but then thought the protests would be too great. But then when it came time to put in the sugar, my hand just went to the brown sugar jar and refused to move over one jar to pull out the white sugar. I listened to the hand. Brown sugar it was.

I justified it with the thought that Cuban sugar must brown. Like Jamaican sugar. Or something.

I kneaded for exactly 8 minutes (give or take 30 seconds or so) and then went to put the nice smooth dough into the bowl for its rising period of (am I reading that correctly???) 15 minutes (fifteen?!!). In my frenzy of doubting, I forgot (on purpose) to oil the bowl. (As if I forgot… isn’t this “quick” method already enough of a departure from the norm? :-))

09:31: I just shaped the bread and put it in the oven. I remembered to sprinkle the top with sesame seeds AND to cut a cross in the top.

But I don’t know… that 15 minute “rising” period didn’t really do very much at all…. Is this really going to work?

09:48: I just went and looked to see how things were going. It looks pretty much the same as it did fifteen minutes ago.

Aughhhhhhhhhhhhh!!! I can’t believe it. I’ve RUINED the experiment!!!

10:05: Oven pop!! Unbelievable!! There is a vaguely exploded dome of bread in the oven. But it’s not quite done yet. I’ve set the timer for another 5 minutes.

I’m not doubting quite so much after all….

10:11: Still not done. I’ve set the timer for yet another 5 minutes. And I turned the oven down to 375F because it’s starting to get quite dark on the top.

Really amazing recipe!! I’m floored that one can have bread from scratch in just a couple of hours!

I just realized why this bread didn’t rise as quickly as expected! I put ONE and a quarter teaspoons of yeast in, not 2.25 teaspoons as instructed!!

Sigh. That’s why I should be measuring by weight. I clearly can’t count to ten when using quarter teaspoons to measure the yeast… But I don’t think I’d have had difficulty reading “seven grams” on the digital scale. 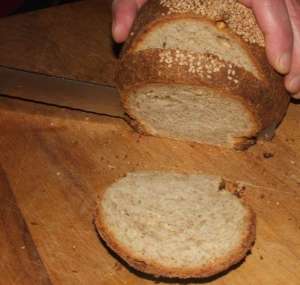 I’m afraid that I broke my rule about waiting until the bread was completely cool before cutting it.

It has been eons since I haven’t been able to wait. Which is rather ironic when you think about it. Here, this bread only took about 2 hours from start to finish, when most of our bread requires several hours.

By cutting into it too soon, the smell of yeast was somewhat prominent. But I quite liked it anyway. I think it would be fabulous with baked beans.

But the really really amazing thing is that the resident lover of all things sweet proclaimed that …get ready for this… the bread is too sweet!!!

Amazing! I never expected to hear those words emitting from his lips. Ever.

I, on the other hand, didn’t think it was too sweet. It’s fine. I confess that I do prefer leaner French-style bread but this was lovely. And the outer crust was wonderful.

In fact, the crust on this bread is absolutely brilliant. The crumb is on the tight side for my taste but it made great cinnamon toast one night for dessert and was terrific the next day for lunch, toasted with melted cheese and a bit of chili con carne.

Thank you, Ilva, for once again reminding me that making bread isn’t rocket science; it can be achieved in many ways.

In short, bread just wants to be bread.

1.) Flour: Clayton simply calls for “bread” or “all-purpose” flour. I don’t know why but I seem incapable of making bread without at least some whole wheat flour. I ended up using about 2.75 cups of flour in all.

2.) yeast: I was a little horrified at the amount of yeast. But I was also determined to follow the recipe. I THOUGHT (I really did!) I was adding 2.25 teaspoons of yeast but was challenged with the counting and only managed to put in FIVE quarter teaspoons. (Can you see me rolling my eyes now?)

3.) Salt: If you are using coarser salt like Kosher salt, it’s probably better to weigh it. 0.5 teaspoons of fine salt weighs about 9 gm.

4.) Sugar: Clayton calls for white sugar. I made an executive decision to use brown sugar. Next time, I’d use much less and possibly none at all.

5.) Hot water: Under no circumstances should you use water from the hot water tap. Of course, saying that it is unsafe to use water from the hot water tap might be an urban myth, but why tempt fate? Heat the water in a kettle or microwave and add cold water until it is the correct temperature. (Use a thermometer; your fingers have no idea of temperature!) The temperature should be BELOW 120F(49C) because yeast begins to die when the temperature is higher than 120F.

7.) Baking times: I found that the bread started getting quite dark on top long before it was done on the bottom. After about 30 minutes of baking, I turned the oven down. Then when it still was not getting done, I turned the bread over (good luck balancing it) and put the oven temperature back up to 400F until the bread was finally completely done.

8.) But I want Warm Bread!! : If you wish to serve warm bread, reheat it after the loaf has cooled completely. To reheat UNsliced bread, turn the oven to 500F for 5 minutes or so. Turn the oven OFF. Put the bread in the hot oven for ten minutes.

Around Christmas, we had quite a discussion about what kind of bread to make in the new year: savoury or sweet; difficult or easy; in or out of comfort zones….

I pressed for something lean and savoury to counteract the Christmas indulgences. I also begged not to have to do anything too difficult.

There was a gentle reminder that our little group was put together to encourage each other to try recipes out of our comfort zone. Phooey. I hate it when the reminder is right. I steeled myself for the announcement that January’s bread would be insanely difficult to make and waited anxiously to hear the choice.

I have a bread suggestion here, easypeasy: Bernard Clayton’s Cuban Bread- rise for 15 mins, then put in cold oven and start it up so it rise and bake in the oven at the same time. It’s good too.

Easypeasy?!! I LOVE easypeasy! Say a happy hello to it!!

And making this dough was indeed easypeasy.

But. It was definitely out of my comfort zone. I wasn’t at all keen to make bread starting in a cold oven. With our cranky old oven?

So. Whether this Cuban Bread is in or out of your comfort zone, of course, we’re hoping that you will now bake along with us.

To receive a Baking Buddy Badge to display on your site: bake Cuban Bread in the next couple of weeks and post about it (we love to see how your bread turned out AND hear what you think about it) before the 29 January 2012.

Thank you, once again, Ilva!

Please take a look at the other BBBabes’ Cuban Bread: