Who me? Late? I don’t know WHAT you’re on about. We ate this on time…. 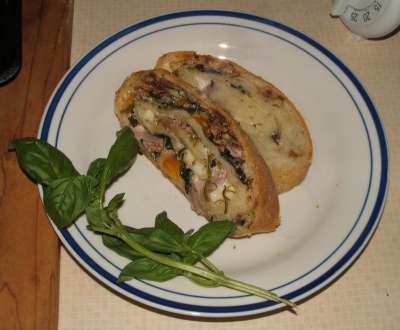 This month the BBBabes are relaxing and have decided to take it easy. We’re making Stromboli to celebrate the start of picnic season.

Of course, me being me, I started thinking about actually baking it on Sunday….

My excuse is that it’s not quite picnic season here yet. It almost is. But not quite. Even though it should be by the middle of May. Our forsythia is still in bloom but starting to look less dazzling because it is leafing as well. The miniature apple(??) tree has just sent out its beautiful deep red blossoms. But it’s only going up to about 14C today and yesterday (BBBBaking day), it only went up to 10C. With rain on and off all day yesterday and most of today.

Hmmm… I guess that nixes baking in the barbecue.

The recipe the BBBabes are following is one on Heather’s (Girlichef) site. I love Heather’s description of Stromboli: “bread stuffed and erupting with deliciousness!”

Sounds great, doesn’t it? But exactly what IS stromboli? (Or is that more than one strombolo and should I be asking what ARE stromboli?)

Stromboli was named after the volcanic island located off the coast of Sicily by the same name? So named because of the way the cheese and fillings erupt from the holes pierced in the rolled Focaccia dough, that you pierce before baking.

For those of you not quite sure just what a Stromboli is…. it’s Italian bread dough that’s rolled flat… and layered with assorted Italian meats, cheeses, and vegetables such as olives, roasted peppers, onions and the like. The bread dough is then rolled, jelly roll style and baked. When served, the Stromboli is sliced into thick slices.

-cookingtipoftheday.blogspot.com, Recipe: Stromboli Made With Italian Herb and Garlic Dough

Stromboli is a type of turnover filled with various cheeses, Italian meats or vegetables. The dough is Italian bread dough. Stromboli is reported to have originated in 1950 in Essington, Tinicum Township just outside of Philadelphia, at Romano’s Italian Restaurant & Pizzeria, by Nazzareno Romano.

While there are many different types of meat turnovers the world over, none are quite like the stromboli, somewhat similar to the submarine sandwich and close relative to the calzone. […] Most people credit Nazzareno Romano, the proprietor of Romano’s Italian Restaurant and Pizzeria, in Philadelphia, with its invention. […] The name for stromboli is a direct reference to the neorealistic film by director Roberto Rossellini, Stromboli terra di Dio, […] made in 1950, and the sandwich/pastry by the same name is said to have emerged at roughly the same time as the film’s release.

-wisegeek.com, What is Stromboli?

Aha!! So THAT’S why I can’t find any stromboli recipes in our Italian cookbooks!

However, I just couldn’t stop myself from seeing what others chose to stuff stromboli. Here are some that called to me:

I was a little surprised that Saveur magazine didn’t have a recipe for stromboli. But they DO have one for calzone, filling it with: mozzarella, anchovy filets, san marzano tomatoes, oregano leaves. As good as that sounds, I nixed it. None of the stromboli recipes I looked at call for tomatoes (except the vegetarian one at livestrong.com).

16 May 7:00 am: Oh oh… Today is posting day and I’m just now thinking about getting the flour out and what fillings we’re going to have to get at the store today.

8:20 am T just asked me if the amount of flour is the same as we would do for a pizza. Huh?? This is coming from the guy who never measures anything.

And why does the amount of flour matter?

T: Don’t make too much. I don’t want it to be too bready.

Using the handy calculator at gourmetsleuth.com, I converted various ingredients into grams so I could work out the percentages.

Fascinating. The only real difference between our recipes is the amount of oil.

So. Instead of using 1 Tbsp of olive oil that I would normally put into that amount of flour, I’ll add 2 Tbsp.

The dough was easy to mix. And nothing bad or untoward has happened yet.

3:20 pm The pepper is ready to go. (I found a jalapeno pepper in the fridge and roasted that as well as a small yellow pepper.) The spinach is salted. T made BRILLIANT Italian-style sausage. We get terrific ground meat from our butcher. He always grinds it fresh and there are never any sinewy bits in it.

We also got wonderful ham – smoked by the same excellent butcher. And I wheedled enough at the deli counter to get T to agree to us buying a small amount of Provolone to go with the mozzarella. There’s a bottle of San Giovese on the counter waiting to be opened.

We also got hold of a copy of Rossellini’s “Stromboli, terra di Dio” and tonight are going to eat Stromboli while watching Stromboli.

How can we go wrong?

Hey!!! WHERE’S the mozzarella?! I looked in our bikes, in the freezer, in the vegetable drawer. No mozzarella. Luckily, there was a new block of Monterey Jack in the fridge. We’ll use that.

7:15 pm Once we got over the cheese problem, assembly is dead easy to do. Into the oven it goes. It looks great already. Is it time to eat yet?!

7:30 pm I love the sound of the Stromboli popping in the oven as steam pushes bits of oil out of the holes.

8:00 pm It’s done!! Waiting for 10 minutes as it rests is killing us. It smells wonderful. 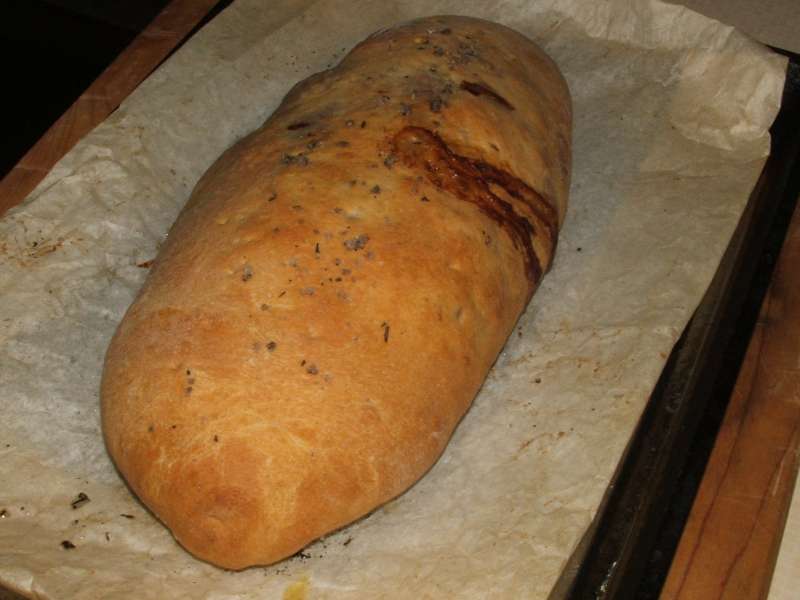 The holes that are pierced into the shaped bread just before baking are to encourage lava-like eruptions. This particular stromboli was rather quiet… allowing only a little lava to escape.

Of course, now you’ll want to make Stromboli too. Here’s the BBB recipe. And here is what I did to the recipe:

1.) Water: Tap water is fine to use – just make sure that it has stood for at least 12 hours so that the chlorine has dissipated. Under no circumstances should you use water from the hot water tap. Heat the water in a kettle or microwave and add cold water until it is the correct temperature, (use the baby bottle test on the back of your wrist – your fingers have no idea of temperature!) Dan Lepard suggests using a ratio of 1 part boiling water and 2 parts cold water.

Or you can use a thermometer. Note that the water temperature must be BELOW 48C (120F) because yeast begins to die when the temperature is higher than 48 C.

2.) Flours: The BBB recipe calls for unbleached all purpose flour only. I am incapable of making bread with just white flour and always like to add just a little whole wheat flour – to mimic rustic milling (thanks to Carol Field for this idea that is laid out in her wonderful book “The Italian Baker”).

3.) Salt: The BBB recipe calls for 1 teaspoon of salt. But this is table salt. Our salt is kosher salt. I’m guessing that 7 grams of table salt may be around 1.5 teaspoons. But it’s just a guess. (This is why I measure in grams for bread making.)

5.) Mozzarella: Sigh. Where IS that ball of mozzarella we bought last week?! (We used Monterey Jack instead.) 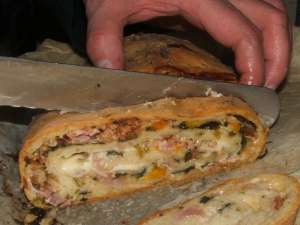 I was expecting stromboli (the bread) to be good and Stromboli (the movie) to be rather forgettable. I was wrong about one of those.

Stromboli (the bread) is fabulous.

Imagine how great it will be when it’s cooked on the barbecue!

Pat, aka Elle (Feeding My Enthusiasms) is the host of May 2011’s Bread Baking Babes’ task. She wrote:

There are entirely too many bread books and blogs with bread recipes…or not enough. One of my favorites is Carol Field’s The Italian Baker. I was thinking of having the Babes bake her very complicated Panettone con Dotteri e Noci, a recipe that has intrigued me for a while. Once I realized that it is a laminated dough and that April and May can be too hot for laminated dough, I looked elsewhere for May’s bread.

I’m inviting ya’ll to gather round the kitchen table in May of the Bread Baking Babes 4th year and bake Stromboli. […] It’s getting to be picnic time, or will be by the time this bread gets posted, so I hope you’ll enjoy it.

We did! We did!! Thank you, Pat and Heather!

Of course, you’ll want to bake along and receive a Baking Buddy Badge to display on your site; bake Stromboli and post about it before the 29 May 2011.

As an aside, I particularly like how it is (apparently) that Ingrid Bergman came to be in Stromboli (the movie) at all:

I saw your films Open City and Paisan, and enjoyed them very much. If you need a Swedish actress who speaks English very well, who has not forgotten her German, who is not very understandable in French, and who in Italian knows only "ti amo", I am ready to come and make a film with you. 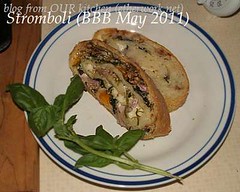