Over the past couple of days, I have been tidying broken links and came across the following:

[I]t’s finally come to pass that my time is this space is over. […] [W]hen it’s clear that no one is listening any longer, it becomes so much harder to think about what to say.

– Kate, Kate in the Kitchen, a bittersweet good-bye

I was already feeling just a little sad and forlorn that it seems as though there are fewer readers and fewer and fewer comments here too. And then I realized that I don’t comment on others’ blogs as much as I used to either.

I blame FaceBook! It has sucked away my time on the internet, getting me to look at pictures, skim with glazed eyes over anything longer than one sentence and blindly click “like” without fully paying attention to what is there.

Then I realized. It’s not too late to make a new year’s resolution to visit favourite blogs and leave comments from time to time. So I began.

And how interesting that she too talked about social media. But in a complete different way: “social media […] is now an indispensable part of blogging“.

I look at social media in a completely different way. I really dislike what it has done to blogging. For me, FB, Twitter, Google, etc. etc. have usurped my attention and I forget to come and see what my friends have written about.

But I really liked Jeanne’s 6 things she learned about blogging, particularly this one:

There is no “right” and “wrong” way to blog. Some people want to read a blog with recipes made using canned ingredients and cake-mixes, so why shouldn’t bloggers who choose to, cater to that audience? Some people like blogs that produce one 3,000 word post a month; other readers want a 200 word post every other day. Trying to say that “bloggers who do not use all fresh ingredients are not proper food bloggers” or “people who have not worked in a restaurant are not proper restaurant bloggers” or “no post should be longer than 500 words” or anything along those lines goes against the best part of blogging: your total freedom to blog exactly as you wish.

And Jeanne’s ten years of blogging got me thinking. I realized that I had no idea how long I’ve been blogging.

That’s eleven years that I’ve been type type typing. And, with this one, 1025 posts!! I keep vowing to be more succinct. THIS post was going to be only 2 paragraphs long to reflect the first post. hahahahahahahahahahahahahaha! As if…. 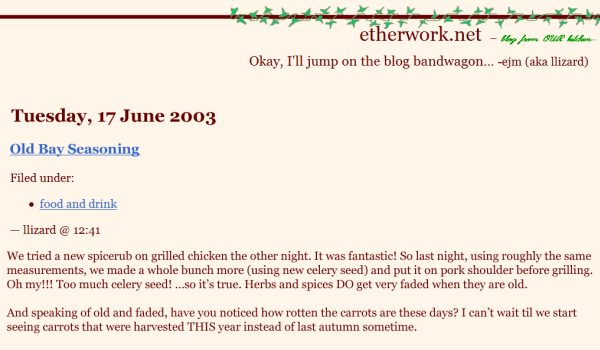 Look at that! No sidebar. Just the words. I love it!

I also love that my first post was about Old Bay Seasoning (it is still one of our favourite spice rubs). And thanks to the internet – and SAVEUR magazine, once again last night we had the most wonderful grilled chicken, using our newest favourite spice rub, Djaj Bil-Bahar Il-Asfar.

When I started blogging, I really didn’t care if people commented. In fact, I didn’t even use an actual blogging program, so people COULDN’T leave comments on the actual page. (I suggested that they comment on my now defunct forum….) It wasn’t until January 2005 that I installed WordPress and allowed (and began to expect) commenting.

I didn’t always post a recipe. I often joined in various blogger events such as WHB, EoMEoTE, WTSIM…,SiR, JFI, IMBB, SHF, BBD, WBD, and of course, BBB. And what fun we had!!

In the beginning, like Jeanne, I had no digital camera. Indeed, I had no thought of even owning a camera. I was simply writing because I wanted to set it down. And how UNverbose I was when I first started!

A lot of fabulous new recipes have been tried and many amazing friendships have developed over these eleven years!! I discovered a whole new world.

Thank you all! Here’s to eleven more years….

Now, excuse me while I go and look at a few more of my friends’ blogs.

It wasn’t until 2006 that we got a digital camera. I remember manipulating T into getting one, not wanting to say exactly why I wanted it, and being thrilled that he was completely on board when I finally divulged my reason.

I’ll copy Jeanne and list the anniversary(ish) posts from past years. Okay, okay. There’s no mention of anniversaries at all. But each post is close to being on the right day….

edit 17 July: I just read yet another blog post about the demise of blogs!

[M]ost of the personal blogs I once followed have vanished, or haven’t been updated in months or years. The blogroll in my sidebar reads like an honour roll of war dead. But I keep on blogging because, compared to tweeting for thousands of followers or posting to hundreds of Facebook friends, the single-digit pageviews my blog now attracts are a paradoxically private way to express myself. […] We all want to feel we’re being creative, declaring that we exist and our thoughts and feelings matter. Some might say it in a Snapchat. I’ll keep bashing the keyboard to update my lonely, uncool blog.

– Mel Campbell, theguardian.com, Should we mourn the end of blogs?

4 responses to “Eleven Years? Can that be right??”