summary: recipe for shaker lemon pie – easily the best lemon pie I’ve ever had (recipe includes pastry made with lard); SAVEUR magazine is wonderful and why it’s a good reason to keep back issues; (click on images to see larger views and more photos) 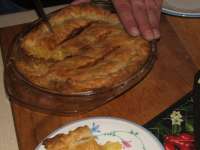 Isn’t SAVEUR magazine great? Some years ago (longer ago than I had realized until quite recently), I was given a subscription to the magazine. I was ecstatic. I generally read each one cover to cover then put it out for T to read. For some reason, last month it took me longer than usual to get through the current issue and there was murmuring. Discontented murmuring:

he: I think I have this last issue of SAVEUR memorized. It’s been here for ages. Can we have a different one? 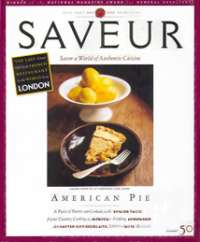 So I went deep into our stack of back issues and pulled out No.50 from April 2001. (Really?! We’ve been getting SAVEUR for about 10 years?!) My reason for picking that particular issue was the really beautiful picture of lemons and pie on the front cover and the title “American Pie”.

And not long afterward, there were new murmurs. Contented murmurs:

he: Mmmmmmm… do we have any lemons?

he: I want to make Shaker Lemon Pie. I can’t believe we didn’t make it before.

me: Okay… And Shaker Lemon Pie is??

And I did see. And I can’t believe we didn’t make Shaker Lemon Pie before either. How on earth did we miss noticing it? It’s fabulous. It’s the best lemon pie I’ve ever had.

We didn’t follow their recipe for pastry – not that we think their pastry would be bad. It’s just that we know our pastry is phenomenally good.

And after consulting several other internet recipes for Shaker Lemon Pie, we also decided to omit the flour from the filling.

Here is our take on the SAVEUR recipe. (We made half the following recipe and used a casserole dish lid as a pie plate):

Serve with or without ice cream.

» If you are serving this pie to vegetarians, use unsalted butter rather than lard in the pastry. 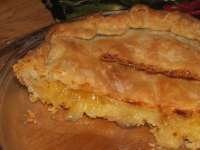 Just before dinner, we handed a wedge of pie across the fence to our neighbours and went inside to finish chopping vegetables, etc for our dinner. While we were dining, the phone rang; we let the machine pick up. And an ominous somewhat familiar voice said, “Tomorrow morning, if it feels like someone has been in the house but only pie is missing… we have a key….”

And being forewarned, we hid the rest of the pie. Yes. It really is that good.

So. Do you have any lemons? If not, you must get some. You need to make this pie.

Some years ago, we were raving to friends about what a great lemon meringue pie T had made. And one of them looked wistful and said softly, “I love lemon meringue pie…”. So the next time they came to our house for dinner, T pulled out all the stops to make lemon meringue pie just for her. And the pie was beautiful! The meringue was lofty and peaked and golden. The filling looked perfect – lovely light coloured and fluffy – lemon yellow, in fact.

And we gave C the first piece. A big piece. “You’re going to love this pie.”

And she took a big bite. And her eyes went wide.

“Yes, it’s not horribly sweet like some lemon meringue pies.”

“Mrrmmmm…” came the polite response, as C carefully put her fork down, looking a little puzzled.

Confused at the lack of swooning, T and I took bites out of our pieces of pie. And gasped.

And T suddenly realized that he had forgotten to put in any sugar. We tried to rescue the situation by sprinkling the rest of the pie liberally with sugar. But it was a lost cause.

We never did stop laughing about that pie.

Unbelievably, T never redeemed himself to make another lemon meringue pie for C. We meant to. We really did.

Wouldn’t she love this Shaker Lemon Pie! How I wish we could give her a slice and watch her beautiful big eyes widen with pleasure this time! (But we still wouldn’t stop laughing about the other pie.)