summary: Occitane-style stew from SAVEUR magazine; about victuals; isn’t English the most ridiculous language? (click on image(s) for larger views and more photos)

We were watching Antiques Roadshow the other day and heard one of the appraisers mispronounced “victualler”. At first, I thought I’d cut him some slack and wondered if it was yet another English word that is pronounced differently in America than in UK. But no. Here’s what it says in two of our pocket dictionaries:

– The Little Oxford Dictionary of Current English
vict-ual (vĭt’l) n. 1. Food suitable for consumption 2. vict-uals. Items of food: provisions – vict-ual v. […] word history: Victual was borrowed from the Old French vitaille, and until the 16th cent. The spelling of the word conformed to its pronunciation, which rhymes with little. During the Renaissance and the renewal of interest in classical languages and literature, scholars pendantically revised the spelling of English words to reflect their origins. Victual comes ult. from Late Latin victualia, “provisions“. The pronunciation has never reflected this artificial respelling, and the form vittle which adheres more closely to the actual sound is still sometimes seen.
vict-ual-er also vict-ual-ler (vĭt’lər) n. A supplier of provisions

I can’t get over the fact that there is such a long entry in the Webster’s – it’s a paperback pocket book!

The widow she cried over me, and called me a poor lost lamb, and she called me a lot of other names, too, but she never meant no harm by it. She put me in them new clothes again, and I couldn’t do nothing but sweat and sweat, and feel all cramped up. Well, then, the old thing commenced again. The widow rung a bell for supper, and you had to come to time. When you got to the table you couldn’t go right to eating, but you had to wait for the widow to tuck down her head and grumble a little over the victuals, though there warn’t really anything the matter with them, — that is, nothing only everything was cooked by itself. In a barrel of odds and ends it is different; things get mixed up, and the juice kind of swaps around, and the things go better. 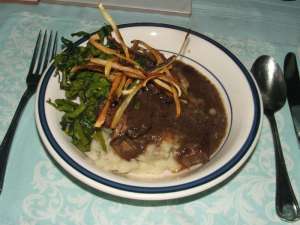 Huck is right, isn’t he? Food does taste better when it’s all cooked together.

Late last year, we were between books and our evening read-aloud sessions were from past issues of SAVEUR magazine. We loved everything about Roberta Corradin’s article “Home for the Holidays” in SAVEUR (Dec.2010, no.134). The next day we rushed out to get root vegetables to make stew, loosely following the recipe for Brasato Vitello to make it.

We could not believe how wonderful it was. It tasted like Christmas! We immediately changed our proposed Christmas Eve menu (we had planned to serve Provençal-style Fish Soup with Aioli). We were only vaguely worried that the new SAVEUR stew might not be as fabulous the second time.

There was no need to worry. It may even have been better.

I do love SAVEUR magazine! Not only are the articles and photos fascinating (we love to read about how people in other parts of the world live) but the accompanying recipes and flavour combinations are added bonuses.

This Brasato Vitello recipe was attached to the same article as the one that caused us to make apple pie with red wine. But we decided we didn’t want to use veal. For many reasons. But let’s not get distracted about that for now, okay?

Each time we made the stew, when the meat was done, we put everything but the meat through our food mill to smooth out the sauce. We served the stew with stir-fried rapini and garlic and oven-roasted parsnips. Each time dinner was brilliant. So brilliant, it made me cry.

Speaking of victualling, now the larder is bare. We’re heading out on our bikes today to stock up on stew ingredients. Apparently it’s going to [shriek of agony] snow heavily tomorrow. 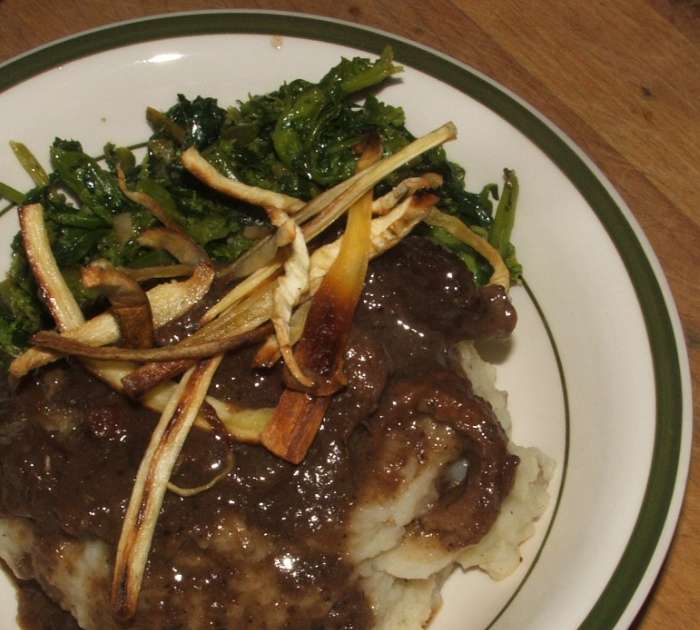