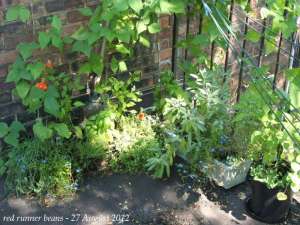 As an experiment this year, in mid June I planted a couple of Red Scarlet Runner beans in our herb pots on the second floor deck. (I don’t know why I persist in calling them red runner beans, especially after being corrected on several occasions… not to mention that “scarlet” runner beans is so much more attractive sounding.)

I was thrilled that the bean plants actually emerged and were already quite tall by mid July. 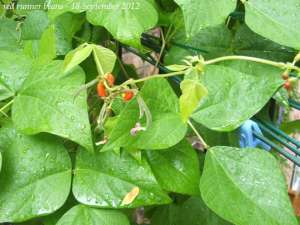 By August, the plants were very lush with lovely red flowers. But there was no sign of any beans.

And then in mid September, we were even more thrilled to see beans starting to form. But we worried that there wouldn’t be enough time before the first frost for them to develop.

But beans are fast growers! Just a few days later, they were looking quite respectable. We harvested 9 (nine!!) beans and steamed them very lightly. 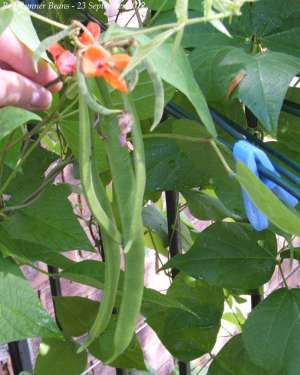 They were amazing! Sweet and tender. They were easily the best green beans we’ve ever had.

Whatever the answer, why didn’t anyone tell me before how great Scarlet Runner Beans are?

Tonight, I made the most brilliant pasta dish with roasted beets and sweet potatoes, caramelized onions, yoghurt, dill, goats’ cheese and one large Scarlet Runner Bean that was lurking on the plant by the patio. It was the only bean on that mostly shaded plant. That bean was just as wonderful as ever and lent a wonderful sweetness to the dish! (Don’t even begin to imagine that I took a photo of the dinner. I was far too busy stuffing my face.)

I just looked again at the bean plants on the deck and see that what were piddling little beans a couple of days ago are now lovely and robust. And even better, there are enough beans for one more dinner.

But next year, I really must plant more than three Scarlet Runner Beans! In mid August, I moved – and repotted – our newly acquired fig (Ficus carica “Brown Turkey”) to see if it could get more sun. It has grown taller but the figs still haven’t ripened. They look pretty much the same in now as they did when this photo was taken at the end of August. (It will be getting cold soon…. Do figs ripen off the tree??)