You ought to have seen what I saw on my way
To the village, through Mortenson’s pasture to-day:
Blueberries as big as the end of your thumb,
Real sky-blue, and heavy, and ready to drum
In the cavernous pail of the first one to come!

These days, there are baskets of wild blueberries galore at the fruit market. We know they are probably good. 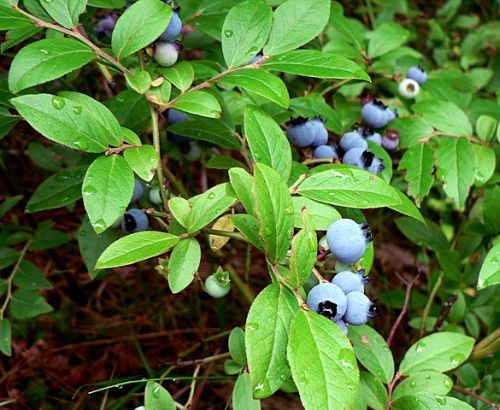 Apparently, we could also pick our own, if we were willing to battle with the suddenly dense parade of cars escaping to the countryside.

(Vaccinium angustifolium) Perennial. Zones 2-6.[…] The intense flavour of wild blueberries (or lowbush blueberries) is unmistakable and for most of us a rare and spontaneous treat. Larger, highbush blueberry varieties have virtually taken over the blueberry industry, but as we know, bigger doesn’t necessarily mean better. Wild blueberries are sweeter and have that powerful blueberry flavour that is just unmatched. The smaller fruit also make them superior when it comes to baking.

the Incredible Seed Company (Nova Scotia) | Low-Bush Wild Blueberry
Lowbush blueberries are what we loosely call “wild blueberries” and they are the plants that are cultivated commercially. They […] naturally grow in rocky, sandy barrens, and peat bogs and are very tolerant of extreme cold. […] Lowbush blueberry fruits are smaller in size than Highbush, but have more intense flavour, and they may have a higher anti-oxidant content than Highbush varieties. […] Lowbush blueberries bear fruit only on second year wood so need to be grown on a two-year crop rotation cycle. The first year they are allowed to produce vegetative growth. In the second summer, plants will produce a crop from the flower bud developed the previous fall. Then after harvest they are burned or mowed to the ground to start again. If allowed to keep growing, the plant will become dense with vegetation which will shade the following year’s flower and reduce bud development and berry production, so growers cut them back to the ground every second year.

– Liza Drozdov, Halton Region Master Gardeners | Berries In the Home Garden
A widely ranging natural resource, wild berries are found in different forms and species throughout Ontario. […] Wild berries should always be picked when they are ripe, as the highest levels of natural sugars are found in ripe berries. […] When harvesting ripe berries, remember that you should never remove more than half of what is growing in any given area. The “half harvest” is a good rule of thumb to allow foraging for others, as well as leaving some for wildlife in the area that rely on them.

Ontario has two basic types [of blueberries]: lowbush and highbush. You can find lowbush blueberries in the wild parts of the province, but they’re also cultivated in small amounts. […] Fun fact: acid rain has stimulated the growth of natural stands of lowbush berries in some inland areas by reducing the pH level of the soil.
[…]
Blueberries are one of the easiest to forage berries in Ontario — and Northern Ontario has them in spades! […] [W]hen hunting for your perfect spot, look in high, sunny areas. Check barren areas, rocks and cliffs, trails and hills, and if you find some crunchy, dried out moss, there’s likely blueberries nearby.

However, we also know that the frozen “wild” blueberries available at our supermarket are even better because they haven’t been sitting, crushed into little baskets, in the back of our car, or in a delivery truck, and/or on a little table in the sun for hours and hours.

But necessity is indeed the mother of invention. We neeeeeeded sauce on our grilled chicken and we had an almost full package of wild blueberries in the freezer. 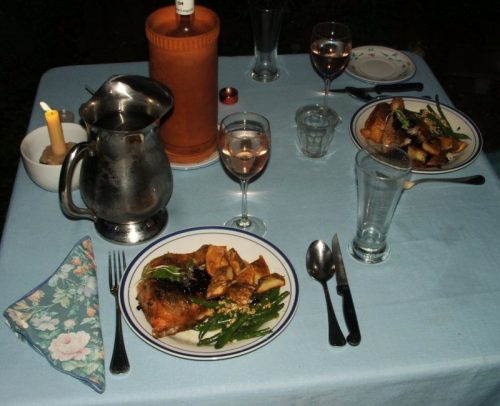 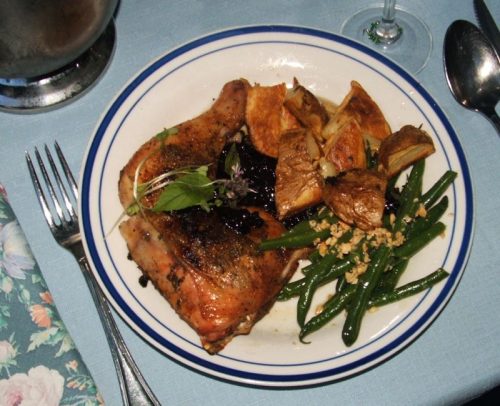 We had first tried blueberry chicken in May. But instead serving it with oven-roasted potatoes, when he was grilling peppers and eggplant, T had also grilled a few slices of our bread. Wow! Both versionas are equally delicious! 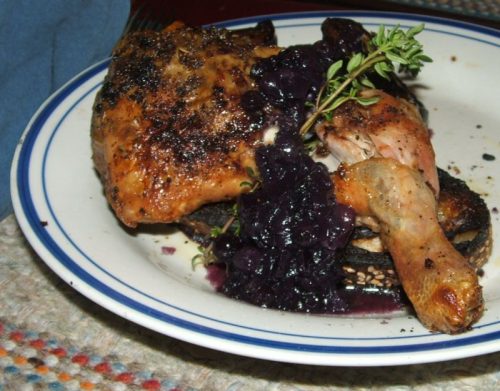 We served stir-fried rapini but the photos of that did not turn out well at all. Instead of looking stunningly delicious (as indeed they were), the plates took on the distinct look of dog’s breakfast.

For dessert in July 2020 – because there has to be dessert at a festive dinner – we had T’s mango ice cream served on PC’s meringue nests and drowned in beautiful, sweet (but not too sweet) blueberry sauce. 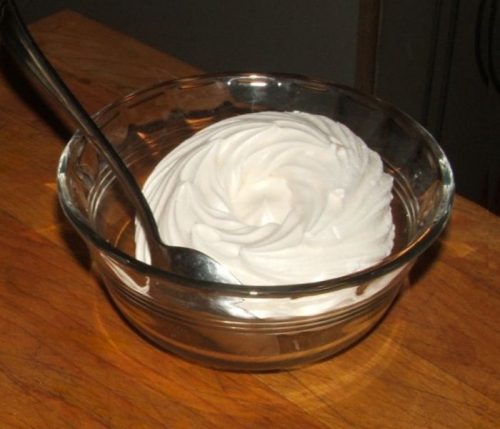 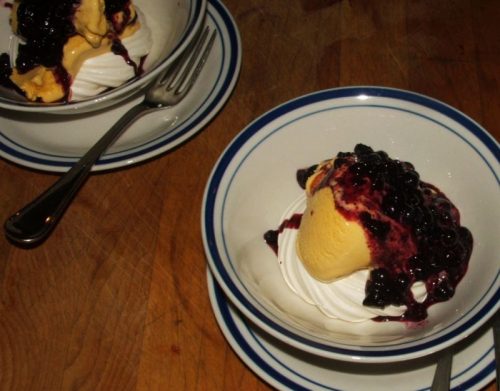 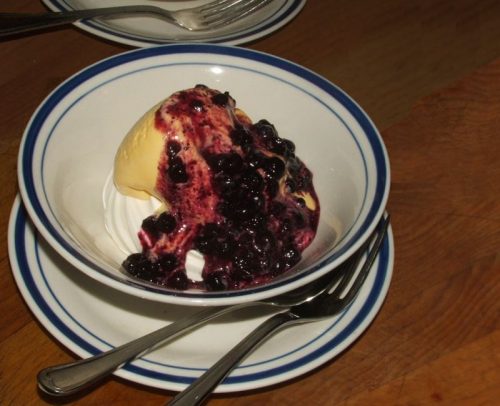 Just in case things weren’t decadent enough, we each had little digestifs of Rum. 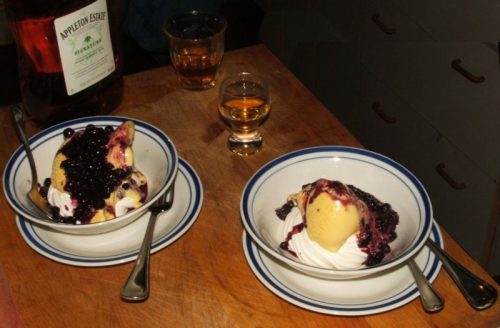 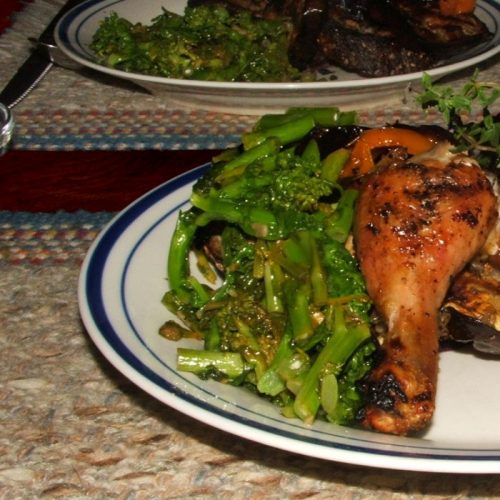 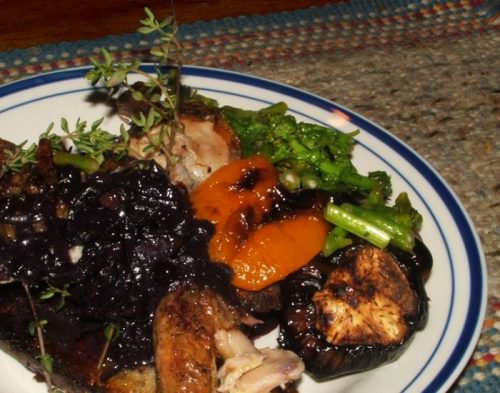