summary: recipe for fettucine Alfredo, based on an article and recipe by Todd Coleman in SAVEUR magazine; information about Presto Pasta Nights (PPN); (click on image to see larger views and more photos) 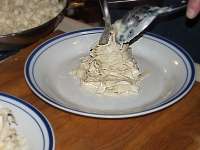 Okay okay!!! I’ll post about the Fettucine Alfredo we made!

Butter?!! In fettucine Alfredo? I bet you thought it was supposed to be cream, didn’t you? So did we.

It turns out that the only ingredients in real Fettucine Alfredo are fettucine, butter, cheese and – wait for it – pasta water!! A recent SAVEUR magazine (issue #120) article, “The Real Alfredo” by Todd Coleman set us straight:

The recipe was invented at [Alfredo’s restaurant in Rome] by a man named Alfredo di Lelio just after the turn of the 20th century. […] In the restaurant’s heyday, the dish was prepared tableside, with much theatrical flourish […] A tangle of steaming fettuccine, fresh from the pot, was placed on a warm platter dotted with pats of sweet butter. As the heat from the noodles and the platter melted the butter […di Lelio…] gracefully lifted and twirled the fettuccine with a gold fork and spoon, pausing to mix in copious amounts of finely grated parmesan.

[B]y 1966, the Pennsylvania Dutch – brand noodle company was marketing “Fettuccine Egg Noodles”, which came with a recipe for Alfredo’s sauce. It called for half a cup of cream and a quarter cup of swiss cheese, in addition to the butter and parmesan. Like many pasta dishes that migrated to the United States, this one was becoming richer — and more Americanized.

Di Lelio’s original [recipe] employed only three ingredients: fettuccine, butter, and parmigiano-reggiano. […] [The] tableside performance was more than mere showmanship: the warmed platter, in combination with a gentle but constant tossing motion, ensured that the butter and cheese melted and melded thoroughly; preparing the dish right there at the table meant that diners tucked into the noodles while they were still piping hot, before the individual elements could cool or separate. […] [T]his fettuccine alfredo delivered all the complex flavors that the cream in the other version had masked, along with a lighter but still luscious texture.

Reading that the original dish called for butter rather than cream made sense. And so we tried it. Amazingly, in spite of being made with so much butter, the sauce is incredibly smooth, much lighter and almost delicate – just as Colman says. In short, it’s fabulous.

And it’s easy! And very fast to prepare too.

Colemann did caution that it was better to use dried fettucine. But we just didn’t believe him. We made our own fresh pasta as usual and just barely precooked it. It was still quite firm before being added to the pan with the butter.

We still don’t believe that the dish is better with dried fettucine! Granted, we haven’t tried but we just can’t imagine this being any better than it is.

Oh yes, one other change we made was to use Portuguese Ilha Branca cheese rather than Parmiggiana. It may not be correct but the cheese is very good AND markedly less expensive than its Italian cousin. 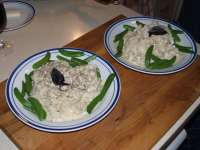 correction: The total amount of flour should work out to about one cup for every egg

Serve immediately on warmed plates. Grind a little black pepper over top. Garnish with a few leaves of basil if you have it. Surround the fettucine with sugar snap peas.

:: The measurements for the sauce are approximate. Use what you think is right.

:: The amounts of flour for the pasta may differ from day to day. Depending on the weather and the size of eggs, you may have to add a little water or more flour. Our rule of thumb is: one cup of flour for every egg.

:: When par-cooking the noodles, the weather may play a factor. If it is coolish and dry in the kitchen, the noodles will take about a minute of par-cooking. However, if the kitchen is warm and humid, the noodles only need to be introduced to the boiling water and then immediately drained.

:: When tossing the noodles, do use a fork and spoon. (Tongs will break the noodles.)

:: If fresh basil leaves are not available, fresh marjoram is also very nice as a garnish.

We had this again last night. But it didn’t look exactly like the photo. Because our herb garden has just started growing, I decided I had to leave the basil plants alone. But the dish looks so bare without an herbal garnish! So I stole a couple of sprigs of marjoram instead. 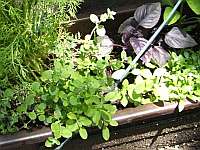 Marjoram is FANTASTIC as a garnish for this! Next time, that’s what I’ll use even if the basil is shrieking to be trimmed.

Presto Pasta Nights
Ruth (Once Upon a Feast) created this lovely event for people to share their favourite pasta dishes. Kait (Pots and Plots) is hosting this week.

edit 27 June 2009: Kait has posted the PPN#119 roundup. Do take a look at all those wonderful pasta dishes!

Eeeeek!!! I just noticed that my subscription to SAVEUR runs out in August. I can’t believe that our mailbox isn’t indundated with notices about the necessity to renew. Because I MUST renew. I love that magazine and still, after all these years, find myself reading each issue cover to cover.