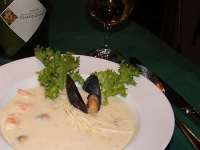 This past weekend we went to Niagara-on-the-lake to go on a Niagara wine tour “Niagara-On-The-Lake Gourmet Dinner And Wine Tour¹” that T won in a raffle.

We had a very pleasant afternoon being driven around. It was a beautiful day – sunny and about 15c. It would have been perfect for bicycling!! And what a shame, the tour company we were with does bicycle touring as well!! If we’d known, we’d have tried to work out a deal that we could have ridden our bikes between tastings….

We started at Lailey winery and were taken on an excellent and informative tour of the vineyard. The vineyard/winery is a small operation and I love that they are herbicide-free. As we strolled with Ed Haddon (Lailey’s in-house sommelier) through the vineyard in the brilliant sunshine, Derek Barnett (Lailey’s wine maker) was busy raking through the last of the crushed grapes (a late harvest this year because there was so much rain this summer).

After the tour, we went inside for a tasting – really good wine but – no surprise – on the expensive (for us) side. Lailey does NOT supply to the LCBO because LCBO takes a 52% cut and Lailey doesn’t have a large enough operation to deal with them so they supply restaurants in southern Ontario.

After that, our driver reappeared to take us up-river to Reif Estates Winery for a tasting. Big operation. Wine pretty much what we expected. Good but not spectacular.

We then headed towards Niagara-on-the-lake and were told that because there were just the two of us (instead of 10-12) we were WAY ahead of schedule.

We were given the choice of going to Jackson Triggs for another tasting or to go for a walk in Niagara-on-the-lake. No brainer. Walk please.

We walked towards the lake to look at Toronto showing clearly across. Then through the neighbourhood to admire the beautiful houses from the 18th century. And headed back to be driven to Strewn Vineyards for our final tasting and dinner.

One of the tastings at Strewn was an ice wine (I think it was Strewn’s Icewine 2004 Vidal) that was lovely. We were reluctant to have ice wine just before dinner and tasted it anyway. It was really good – not cloying at all in the way that so many ice wines are. I said only a quarter jokingly that we’d love to take the glass with us to have for dessert after dinner.

And. It. Was. Nixed. Stupid stupid Canadian laws! Can’t take a glass from the tasting room to the restaurant Across The Hall. In The Same Building.

So at 5:45, we headed in to dinner. We were seated looking out onto their patio and the stunningly beautiful sunset. The sky was wine red in the west.

And dinner was delicious, especially the brilliant soup – mussle and shrimp bisque (T says it was more like chowder) with leeks shredded finely as a garnish (I really thought they tasted like parsnips). We asked the waiter and he said he thought it was leeks.

Strewn makes their own bread there as well: rye and caraway (only a few caraway seeds). It was wonderfully crusty. T had duck confit in a rather sweet sauce (“Brome Lake Duck Confit w/ Vineland Honey & Star Anise Gastrique”) – thank goodness I chose grilled salmon “Skin Seared Atlantic Salmon w/Wilted Spinach & Grilled Lemon”). The duck was lovely but I really prefer not to have sweet things for dinner.

The salmon was prefectly grilled and served with grilled lemon half and rice/wild rice with a hint of sage and wilted spinach (also carrot, grilled eggplant, green beans). Not sweet. Just delicious.

We each had a glass of Strewn Cabernet Franc 2006 (I think) that came with the dinner. The wine was fabulous and married well with both the duck and the salmon.

We were the only people in the restaurant until about 6:30….

Dessert was lemon goat cheese cake that was good – we really liked the lemon. And creme caramel that was just okay (we’re thinking they might have cheated and used gelatine). Supposedly there was cardamom on the creme caramel but we couldn’t taste it because the creme caramel was so sweeeeet (perhaps it was correctly sweet – it’s not like creme caramel is my favourite thing.)

Frankly, I would have preferred the little glass of ice wine from the tasting – with a sliver of blue cheese for dessert. But maybe that’s just me.

And we were finished our dinner by 7:00 just as the restaurant was starting to get interesting and filling up with chatting and happy people.

Our driver took us back to our motel and it was 8:00pm, about the time we would normally be walking IN to a restaurant for a dinner like the one we had just had.

So, in spite of what a really good experience we had, I do have two minor complaints:

All in all though, we had a great time.

And we LOVED the soup that Strewn served. As we were driving home the next day, we couldn’t stop raving about the soup. We raved and raved and suddenly T suggested that he make it for dinner. Whoohoo!! 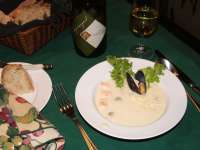 We were in time to stop and get mussels and shrimp. T refused to get leeks (!) and said he could use onions (I still want to try the soup with leeks though. I love leeks in soup!) and because we weren’t convinced that the shredded garnish wasn’t parsnip, we got a parsnip.

As soon as we got home, we cooked the shrimp and mussels, making a fish stock out of the shells and shrimp skins. To add a little more fish flavour to the soup (because we didn’t have any fish carcasses), we threw a couple of anchovies into the bechamel for the soup.

And you know what? I think the waiter was wrong. I would swear that the garnish was parsnip. Very good it is as a garnish too. 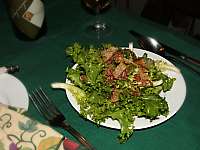 We loved the soup so much on our tour dinner that we decided to serve it as a main course at home. Our starter was escarole salad tossed in a simple warm vinaigrette and garnished with bacon and roasted garlic croutons.

Then onto the wonderful soup – adding more soup when the bowl got empty…. Crusty homemade bread was just the thing to mop up any soup that couldn’t be reached with the spoon. 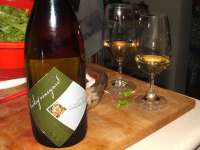 We served the soup with Lailey Chardonnay 2004. The chardonnay was even better than we remembered and married very well with the soup. Each one enhanced the flavour of the other, the wine delivering a wonderful refreshing buttery taste.

Visit three charming wineries for a tour of one and private wine tastings at each.

Visit Lailey Vineyard for a tour and private wine tasting with a winemaker […] Strewn Winery, renowned for its fine wines and Canada’s only winery cooking school, provides a private wine tasting before our guests relax over a three course dinner with a glass of wine at the winery restaurant Terroir La Cachette. Guests can choose between several choices on the menu which features wonderful French Provençal cooking with the finest local ingredients.

I really should write to them to suggest the option of serving dinner at a reasonable hour, with perhaps taxi fare to get back to our accomodation so that the driver doesn’t have to hang around for hours, waiting for us to even start dining.

edit 18 November: When we were at Lailey, we asked whether they made marc with the left-overs after pressing the wine. Of course, we knew the answer. They can’t. Distilling is not allowed without going through masses and masses of red tape. No, wait. I’m not quite right. Apparently, there is no law against distilling. The law is against freely distributing whatever has been distilled. WHAT a shame. I can well imagine that all of the Niagara wineries could be producing wonderful eau de vie. And if a vineyard decided not to distill, it could still cut back on their costs because they could sell their leftovers to companies that did distill instead of having to simply dump them. At least Lailey was composting theirs….

Wouldn’t it have been wonderful to have a small glass of Ontario eau de vie as a digestif after dinner!