summary: going through our photo archives; recipe for flash-fried cherry tomatoes; when charring is good; we have great neighbours; we’ve taken up birding and already have a very rare red bird in our life list; 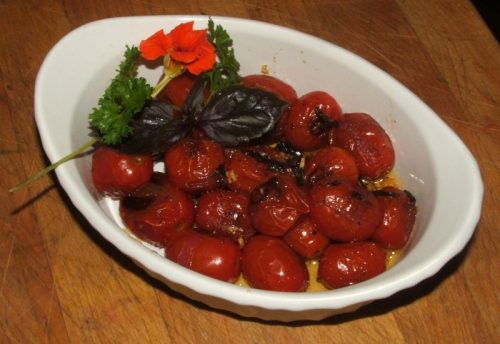 I keep forgetting to rave about a new (for us) way to show off cherry tomatoes: Flash-frying!

Cherry tomatoes are wonderful this way. Sure, they’re cooked, but they still retain their sweet freshness. Actually, they seem to get even sweeter.

We first discovered this in early July (with many thanks to my sisters and our nephew!), before garden tomatoes were even close to being ripe here.

That’s right, these were made with store bought cherry tomatoes. You know the kind. They look good. But they don’t have the intense wonderful flavour that garden-ripened tomatoes have. 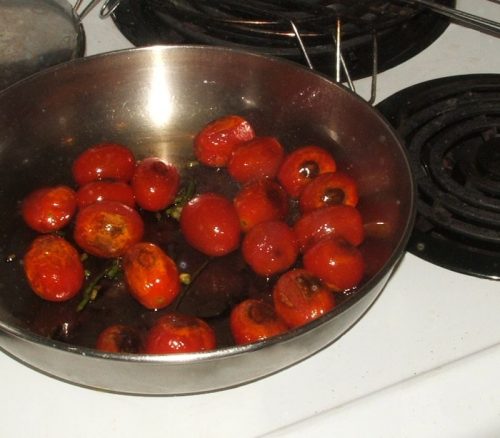 Here is what T did to make these tomatoes:

once again, no real measurements here – use your judgement

Serve hot or at room temperature. Either way is delicious.

:: Because the tomatoes may split when added to the hot oil, and then jump out of the pan and/or spit hot tomatoey oil all over the kitchen, it is a good idea to put one of those splatter screens on top of the pan. 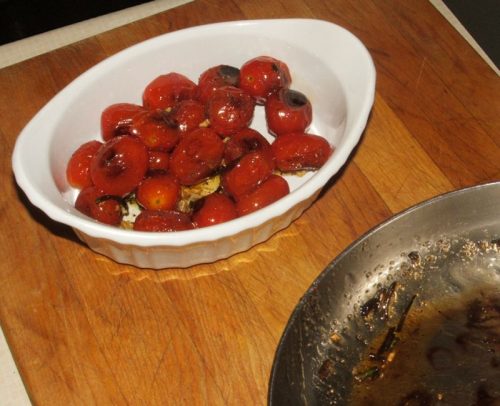 Transfer the tomatoes to a Serving Dish 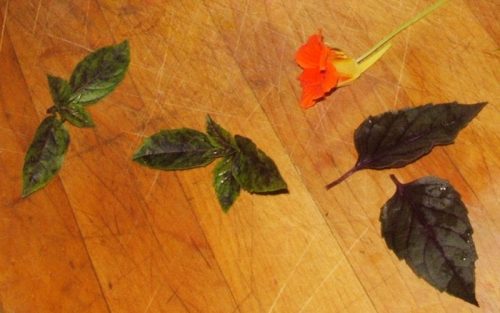 Garnish with Herbs and/or Flowers

This flash-frying method makes even inferior store-bought tomatoes (that have travelled who knows how far) taste fabulous. Imagine how fantastic the dish would be with garden-ripened cherry tomatoes!

And silly me. I haven’t been clever enough to plant cherry tomatoes behind the garage.

But our brilliant neighbours have planted cherry tomatoes!! Red and gold ones!

Note to self: when stealing ripe cherry tomatoes from the neighbours’ garden, refrain from putting them into a front pants pocket – no matter how baggy the pants are. The resulting very wet stain is a.) quite obvious and b.) in a most unfortunate place.

In spite of having been caught red-handed (errmmmm… red/gold-juiced-handed and pocketed) a few weeks ago, look what our very forgiving neighbours gave us the other day! (Only about half of what we received is pictured here!) 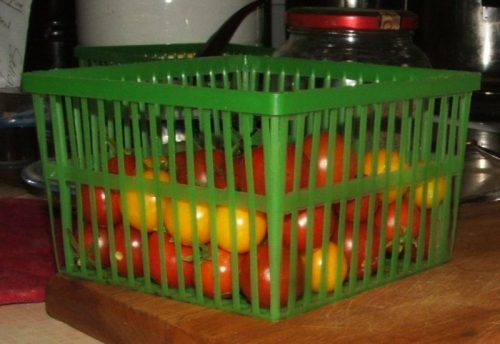 Did we make more flash-fried tomatoes? I’m afraid not!

They’re just too tantalizing to do anything but rinse off, pop past our waiting lips, and have the sweet juice explode in our mouths.

We cannot stop slicing the tomatoes in half and putting them on toast. Sometimes we add bacon bits. Sometimes we have them just plain. They are fabulous for breakfast!

Today, after buttering the toast, (of course we buttered the toast!) we added just a hint of mayonnaise, salt, pepper, and dried dillweed. We would have added fresh dill, but almost all of our garden dill is gone. We suspect multi-legged creatures that turn into the stunningly beautiful Swallowtails are the culprits that demolished it…. They are welcome to our dill! 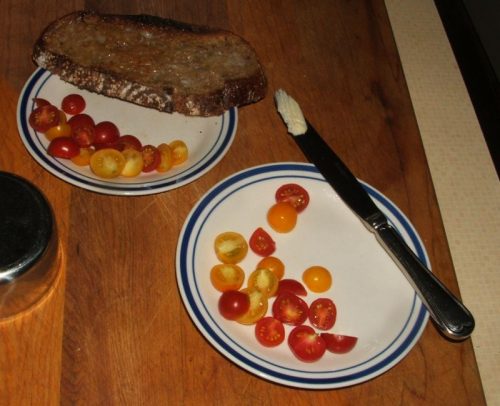 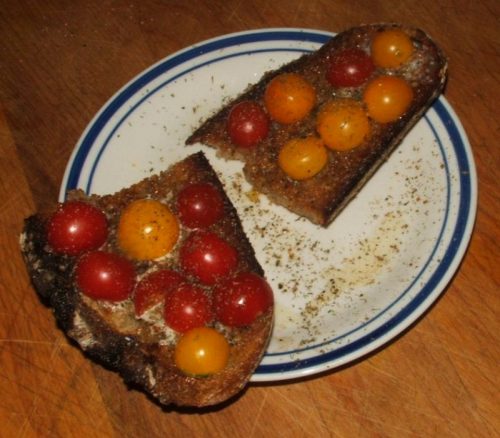 Cherry tomatoes can take over the garden

Some time ago, when I was first planting our herb garden and we still had some sun in our small back garden, I planted “authentic” Greek oregano (purchased at some expense from Richters), genovese basil and cherry tomatoes. About half way through the summer, the cherry tomatoes and oregano were choking out the basil. Thinking about pesto, I ripped the tomatoes and oregano out in rage. I tossed the two giant cherry tomato plant into the composter – causing many renogade cherry tomato plants the next year ALL over the garden; one climbed the next door neighbours’ cedar tree, decorating it festively with beautiful out-of-reach cherry tomatoes (but that’s another story).

Silly me. The composter hasn’t produced renegade cherry tomato plants since 2007 and I haven’t been clever enough to plant cherry tomatoes on purpose in the sunny section behind the garage.

Knowing how truly fabulous cherry tomatoes are, maybe we want them to take over the garden….

Remind me next spring! We neeeeeeeeeed more cherry tomatoes!

When To Pick Tomatoes – And How To Best Let Them Ripen! […] Once a tomato begins to turn from green to slightly pink, it stops taking nutrients from the plant. […] Once [it] reaches this stage, it will continue to ripen off the vine without any issue. And actually, it is better to pick the tomato at this point for several reasons.
First and foremost, it keeps the tomato from becoming damaged from insects, animals, sun-spots, and even wind or summer storms. […] [P]lucking that tomato early also helps your tomato plant. Although the tomato is not using nutrients from the plant, it can slow the production and ripening process for additional tomatoes. […]
Once the tomato has begun the ripening process, it does not need sunlight to ripen. In fact, too much sun can blister and even injure the fruit. That is exactly what happens when over-ripe tomatoes split open on the vine. Putting those tomatoes on a sunny windowsill can cause the same issue.
As it turns out, tomatoes ripen best when stored in a cool, shady location. The ideal temperature for ripening is actually around 65 to 70 degrees, with plenty of circulation. […]
There is one place that should never be used for ripening tomatoes – and that is the refrigerator. Unfortunately, when refrigerated, the process of ripening is halted almost entirely.

– Jim and Mary Competti, Old World Garden | How To Know When To Pick Tomatoes – And How To Best Let Them Ripen!

Month Six (and counting) of still staying close to home

We’ve taken up birding and are thrilled to already have this very rare red bird in our life list! When we first saw it, we thought it was a very young male Cardinalis cardinalis. 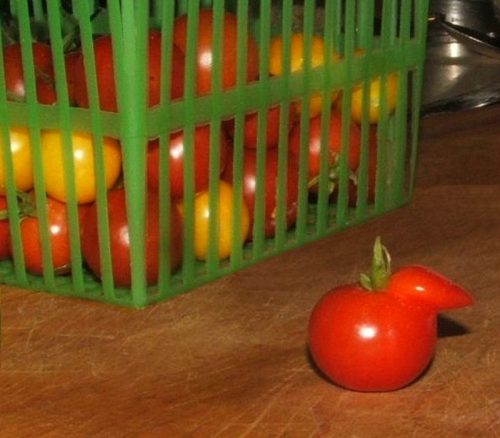 I’m afraid we were very callous. Instead of setting it free to go back into the wilds, we sliced it in half (using a razor sharp knife to be as humane as possible) and made tomato tartare (raw!!! {eeeeeeek}) to go with toast this morning. 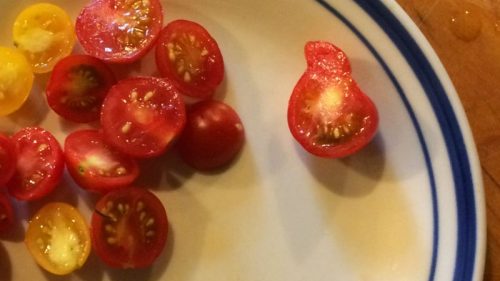 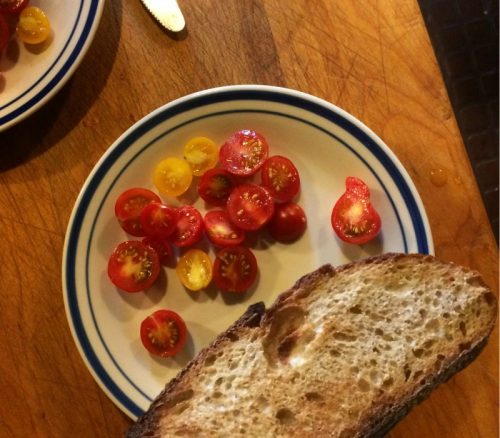