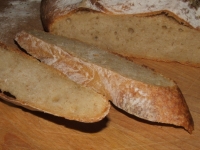 Amazingly, in spite of being flat as a pancake, heavy as lead with an overly moist crumb, the wild bread I made yesterday tasted quite good with T’s phenomenally good pâté. It also went very well with his equally excellent white bean soup.

But before you think I’m happy about the result, let me assure you, I’m not. I’m completely dejected. Disheartened. Because my plan was to be just as dazzling as T.

I really wanted to make not sour wild bread and was going to try the experiment to shape the bread immediately after it had been kneaded – thus putting the bread through only one rise. (Where did I get this idea? I cannot recall but it seemed like a good one at the time.)

Positive of brilliant success, I also decided to copy Susan’s (Wild Yeast) beautiful herb decoration on the roasted garlic bread she made for WBD2008. (If you haven’t seen her bread, you should look. It’s stunningly beautiful. Naturally, HER wild yeast bread rose….)

I was certain the bread was going to turn out. The last time I made wild bread (for my 15 minutes of fame), I got the most amazing oven spring after baking bread that I thought hadn’t risen and wasn’t going to rise.

So this time, when the bread didn’t rise again, I thought, “no problem! I’ll just bake it and it will be fabulous”. Quel stupid idea. 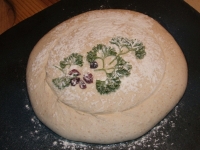 Just after shaping the bread, not having flat leafed parsley as Susan had used, I placed curly leafed parsley and some dried cranberries on top of the shaped round. And put it in the oven with only the light turned on to rise (ha… all it did was spread out). Just before baking the bread, I slashed a ring around the herbs and sprayed it liberally with water.

Then I made another tactical error and scattered more flour over top. Silly me. 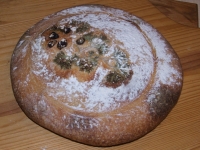 I don’t think the bread changed in size one iota. Except to buckle and bulge a little on top.

The crumb was overly moist – almost as if the bread was not baked enough – even though the internal temperature was around 210F. I’m still convinced that the bread had not risen enough before being baked. And yet, there are the tell-tale signs of lazy baker’s bedroom at the top of the loaf, indicating over-rising. Not a chance that that occurred.

Here are my speculations about why the bread failed:

Eventually, I might learn how to make wild bread when the kitchen is cold… but I don’t think it’s going to be any time soon. I have wrap myself in a quilt, retreat into the comfort of our rocking chair, holding the active dry yeast jar and lick my wounds.

On a happy note, the challah I made yesterday (yes, I used active dry yeast in it) was fabulous. Wait til you see!