summary: spring at last; recipe for Flaxseed Soaker Bread with Prunes, based on a recipe at the San Francisco Bread Institute; following (or not) instructions; baking on time but posting late… oops; a Bread Baking Babes project; (click on images to see larger views and more photos) 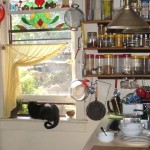 It’s spring at last!! You’ll have to excuse my lateness in posting! I was so thrilled to be able to go outside without a jacket on, that instead of being on time, I went out for a lovely bike ride in search of farmers’ asparagus (alas, we didn’t find any; the farmers’ markets aren’t open until next weekend). Then today was another beautiful day and we found ourselves on the bikes again all afternoon….

A while back, I saw the most beautiful loaf that had been baked by one of the bakers in the Facebook group, “Artisan Bread Bakers”. I immediately made a mental note to make one just like it.

And when Cathy announced that we would be making bread with plums in it, I thought this might be the perfect opportunity to try this amazingly beautiful shape!

Flaxseed and plum bread is a ciabatta-style bread made with a soft dough that has a hydration of over 90%. The formula contains small amounts of whole wheat and dark rye flours, which contribute to the flavor and the rustic appearance. The preferment used in this formula is a poolish, which is mixed the day before and fermented overnight. A matured poolish almost triples in size and is slightly concave at the surface. Over the long fermentation time, poolish slowly builds up lactic acid which gives the bread more depth of flavor.

In [the] video clip, we demonstrate how to mix the dough by hand. In a small batch, soft dough like this can be quickly put together by hand and is also very easy to make at home. 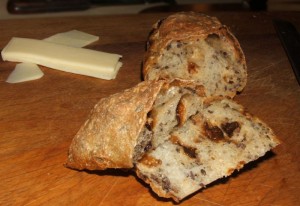 Ciabatta style? Oh oh. What if that means croc?

2 April 2015, 00:12 This bread sounds like fun, Cathy. But since when did “prunes” become “dried plums”?? It drives me crazy that people sniff at prunes but are excited about eating dried plums. I love prunes too and always have (although I’m not wild about stewed prunes).

I just looked at the recipe again and saw (and comprehended) the 95% for the water. Eeeeeeek!!!

Because I’m a freak, I can’t help but try to figure out a formula based on using a total of 500g flour and calculating how much vital wheat gluten to use to account for the fact that we can’t get unbleached bread flour easily.

3 April 2015 at 19:05 I did the calculations, using the chart of the bakers’ percentage on the Total Dough at the bottom of the San Francisco Baking Institute recipe. But I’m staring at the formula again and am now getting VERY confused.

After some discussion about the bread, it turns out that I may have to use raisins in the bread: 75% of the people in the house (there are only two of us) aren’t certain about prunes in bread. Even though 100% of the occupants really like prunes.

14 May 2015, 22:57 Okay okay! There’s no time like the present to make this bread. I’ve now made the starter and the flax seeds are soaking (I used almost boiling water). I guessed at how much 0.125g yeast is. I threw in a few grains. Here’s hoping that the starter will be bubbly tomorrow morning….

An update on the prunes… we had another discussion this afternoon. I started with mocking North Americans for needing to call prunes “dried plums”. And it looks like I’ll be using prunes in the bread after all. Yay.

I just took another look at the recipe:

Allow to ferment [the starter] 12 – 14 hours at room temperature

Twelve to fourteen hours? Oh oh. It’s just before midnight now and I’m planning to mix the dough tomorrow morning around 08:00…. I hope that 4 hours fewer doesn’t make too much of a difference.

15 May 2015, 08:23 Pffft. Why do I worry?! The starter doesn’t seem to require four to eight more hours of fermentation; it’s beautifully bubbly and seems perfectly ready to go.

09:28 I just finished kneading the dough. And wow! Putting in the flax soaker and chopped prunes dried plums {snort} was really interesting! They really wanted to stay together in one lump rather than separate into individual seeds and prune pieces. And once the flax seed bowl was emptied, it was quite oily.

But the dough is much less sloppy than I thought it was going to be. It almost makes me think I should try the croc one more time. I know. I wasn’t supposed to shape the bread. But I just couldn’t help myself… I really wanted to try this ring with braids that I saw on 750 grammes FB page.

So I cut one piece of dough in the way that the recipe said to do. And the other, I rolled out (gently). I decided it didn’t matter that it wasn’t a perfect rectangle. It wasn’t easy braiding the sloppy dough.

But I persevered. And after a few mishaps (note to self: next time leave two strands on far left and one strand on right unbraided until after the ring is formed. That way, there will be a braid to cover up the seam) I finally managed to get a reasonable ring shape with reasonable braids.

Both pieces are now on parchment paper and covered, languishing in the oven with only the light turned on.

Because yes, it’s chilly in the kitchen again. Of course it is. It’s only the middle of May….

What on earth does “vent” mean?!

21:06 It took about 40 minutes in all but the bread was finally finished baking (we think… it sounded hollow on the bottom, anyway) just as we were about to sit down to dinner.

It looks pretty good (even though the braids on the ring are not as defined as I’d hoped. I’ll try that shaping again with a less sloppy dough), but clearly, this bread really isn’t designed to be shaped.

I can’t wait til tomorrow morning! 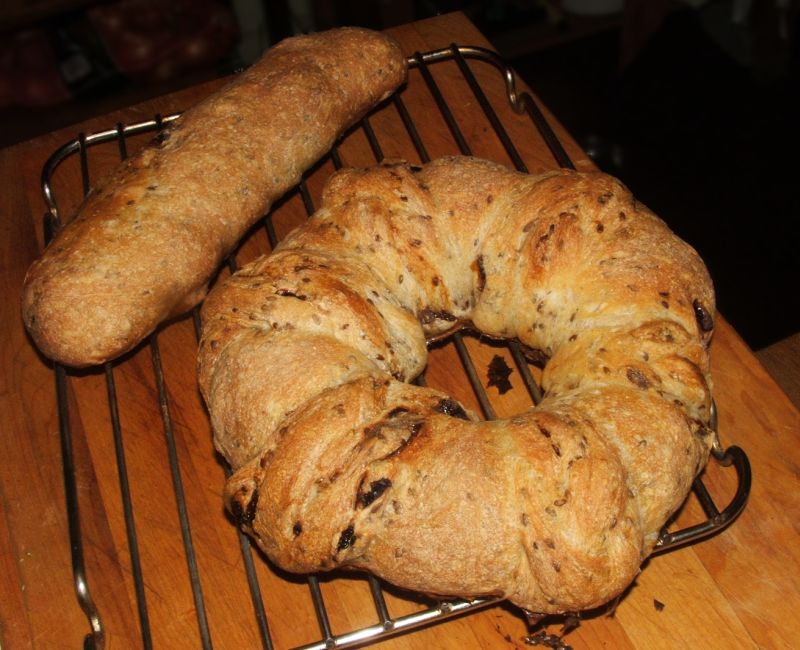 In the morning, we warmed up the bread to recrisp the crust. It was delicious with butter and sharp cheddar cheese.

Because there will be a next time. This bread is delicious! 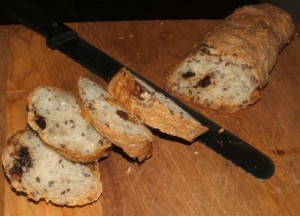 Here is the BBB May 2015 Flaxseed and Prune Ciabatti-Style Bread recipe. And here is what I did to it:

1.) Water at 96F Yes. I’ll just keep repeating this: please do not use water from the hot water tap. Instead, heat the water in a kettle or microwave. If you are allergic to using a thermometer, you can check the temperature by putting a few drops of water onto your wrist: if it feels warm, it’s too warm; if it feels cool, it’s too cool; if it feels like nothing, then it’s fine. Please note that before the yeast is added, the liquid temperature must be BELOW 120F (49C) because yeast begins to die when the temperature is higher than 120F.

3.) Salt The BBB recipe simply calls for salt. Because we use kosher salt – much bigger grain – we always weigh salt…. (For more information about measuring salt, please see Salt is salt, right?.) 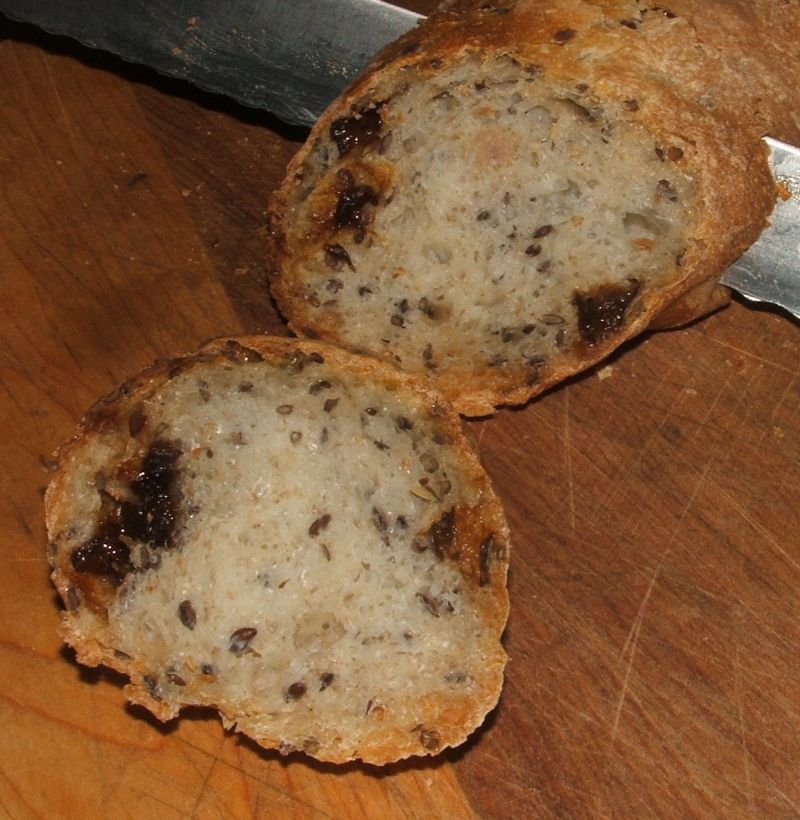 Last night we barbecued pork shoulder, making sure there would be enough for sandwiches today. This bread was brilliant for sandwiches!!

Thank you once again, Cathy!

Cathy is our host for May 2015’s Bread Baking Babes’ project. She wrote:

[L]et’s do something different this month. At least I think this is different from other breads you’ve made over the years. I hunted and hunted for something challenging that didn’t include sourdough. […] I’ve had this bread on my list to make for awhile […] I love the rich color of the loaves. I like the flaxseed soaker and the poolish in this bread. I can envision lot’s of tasty variations of dried fruit and perhaps even nuts in this bread.

We know you’ll want to make flaxseed and prune bread too! To receive a Baking Buddy Badge to display on your site: make the bread in the next couple of weeks and post about it (we love to see how your bread turns out AND hear what you think about it – what you didn’t like and/or what you liked) before the 29 May 2015. If you do not have a blog, no problem; you can also post your picture(s) to Flickr (or any other photo sharing site) and record your thoughts about the bread there. Please remember to email the Kitchen of the Month to say that your post is up.

Please take a look at the other BBBabes’ May bread: 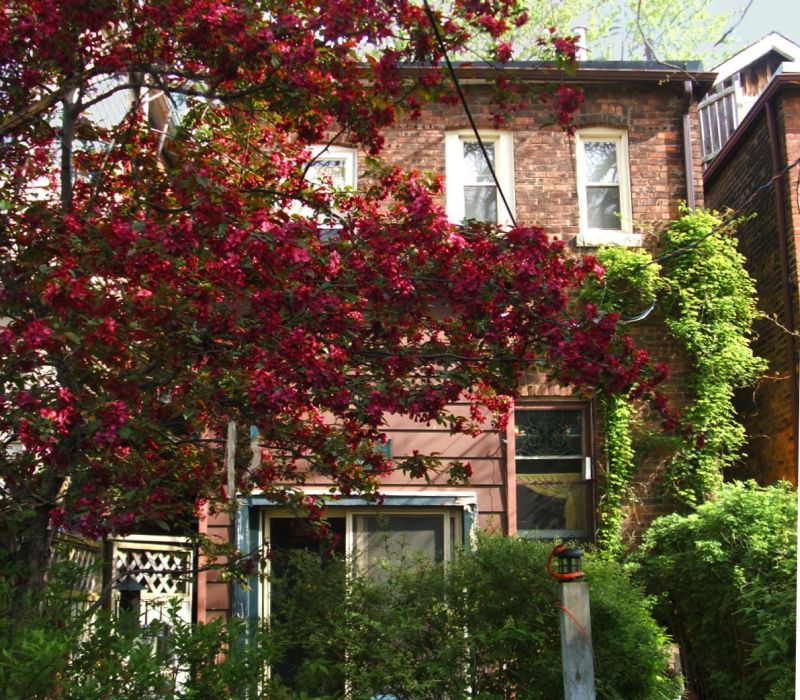 This is how the back garden looks right now. Yay for spring at last!