There really is a difference. And right now we’re loving fougasse. So much that we have entirely rejected the idea of making focaccia. This month, I have the honour of hosting the kitchen of the month and have asked the BBBabes to bake fougasse as well and weigh in with their thoughts on the subject. 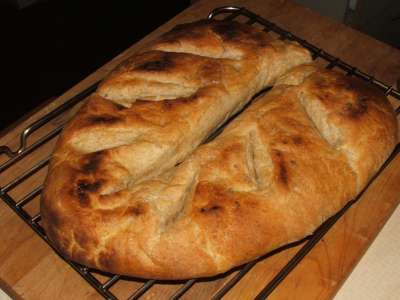 When I first read about fougasse, I thought it must be virtually the same as focaccia. I dismissed making fougasse because I’d made focaccia. They were the same, after all….

But because of still being certain – what with my terrific retention skills when reading – that fougasse was simply French focaccia, I used the ingredients for our focaccia recipe along with Robertson’s shaping and baking method to make our first fougasse.

Amazingly, not only is the fougasse quite different from focaccia (even using the same dough), but both of us have decreed that fougasse is superior to focaccia. At least that’s what we think right now.

Yes, indeed. We absolutely adore fougasse!! (Not that there’s anything wrong with focaccia!) 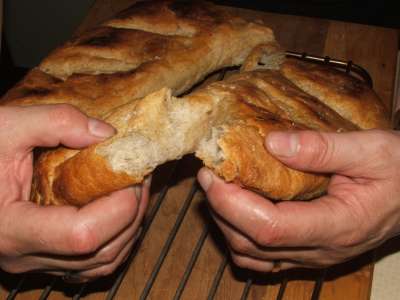 Because fougasse is baked on a stone instead of on an oiled pan, there are more crispy bits. Not too crispy though… it’s juuuuust right!

Of course, it can be cut with a knife but we think that fougasse tastes better torn apart.

Surprisingly, there are few mentions and just a handful of recipes for fougasse in all the various bread baking books we have.

Imagine a small, round and flat loaf, so dense that a knife point cannot penetrate and slips off its surface, and you are obliged to break it in half with your hands. […] This was the bread of poverty, the bread of the peasant, baked under an inverted iron pan over which the ashes of the fire were heaped. The English called them ashcakes, and the French fougasses.

-Adrian Bailey, “The Trenchermen”, The Blessings of Bread, p.31
The lyrical, ladderlike bread known as fougasse is my Provençal pizza. I take my favorite bread dough, shape it into individual breads, then flavor them with whatever delicious toppings I might have on hand – black or green olives, home-cured anchovies, marinated baby artichokes, capers, bits of fresh goat cheese, a touch of hot pili pili oil, or simply a brush of olive oil and a scattering of fresh thyme and coarse sea salt. The most traditional fougasse is flavored with bits of browned pork fat (what we call cracklings), but one also finds sweet versions prepared with a butter-rich dough or briochelike butter and egg dough flavored with orange flower water. The origin of the word is a mystery, though in the rest of france a fouace can refer to any sort of flat, baked galette either sweet or savory.

-Patricia Wells, At Home in Provence, “Fougasse”, p. 191
[T]raditional French ladder or lattice-shaped bread […] is […] crisp, deeply walnutty, dense and chewy […] This bread is moist and full-flavored eaten by itself, and it is a fabulous complement to Roquefort cheese and Sauternes or port.

-Rose Levy Beranbaum, The Bread Bible, “Walnut Fougasse”, p.416
The Provençal flat bread known as fougasse is a crust lover’s dream: it’s flattened and scored, which maximizes the surface area that gets exposed to direct heat but still leaves plenty of room for toppings, such as olives, herbs, sea salt, and cracked pepper.

-Ben Mims, SAVEUR magazine No.130 “The Market Issue” June/July 2010, Shaping Fougasse, p.125
A traditional southern French flatbread, fougasse can be flavored with herbs, olives, and lardons (fried bacon or pork belly), and cut to resemble a leaf or ladder just before sliding onto the hearth to bake. The dough is pressed into a rectangular shape as for focaccia, and a bench knife is used to make swift, decisive cuts in the dough on the peel before it’s cast onto the hearth to bake.

Of our books that do have fougasse recipes, in the ingredients sections, Wells and Robertson simply say to use the “bread recipe” on page…. The SAVEUR magazine (June/July 2010) fougasse recipe (based on one of Patricia Wells’ recipes) calls for oil to be mixed into the dough. Rose Levy Beranbaum suggests walnuts and walnut oil. (Her fougasse recipe looks great!) 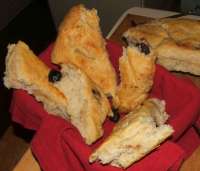 Chad Robertson says for “herbs, olives, or lardons, incorporate the ingredients early in the bulk rise, after the first turn […] The just-baked fougasse can be brushed with olive oil and seasoned with salt and fresh or dried herbs after it’s pulled from the oven to suit your taste.” Wells suggests putting extra flavourings on top like a pizza, just before baking. Because we were planning to bake olive fougasse in the barbecue and often have to turn the fougasse over, I used Robertson’s idea.

After the first couple of times making fougasse, I noticed that in their books, both Patricia Wells and Chad Robertson suggest using lean bread or baguette dough. ie: no oil in the dough itself. 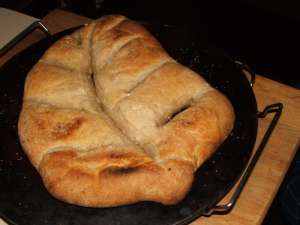 So we tried that too. And it was good. Really good.

We’re not sure if it was better than fougasse made with focaccia dough. Just different. It’s the shaping, slashing and baking that will produce the characteristic (I think) fougasse texture and flavour.

So. Here is what I propose. Use whatever ingredients you like in your fougasse. As Patricia Wells says, use your favourite bread dough. But please follow the shaping and baking methods set out below. Make the fougasse plain. Or fill it with things. Shape it however you like. Bake it in the barbecue or the oven. Whichever is more convenient. Have fun!!!

1.) Corn Meal: This is to make it easy to move the shaped fougasse from the peel to the hot stone. We use a medium-grind corn meal. I’ve heard that semolina flour works as well and apparently, rice flour may be used as an alternate. Parchment paper is definitely a viable alternative with the advantage that it can be placed in the oven and slipped out once the fougasse is half baked. 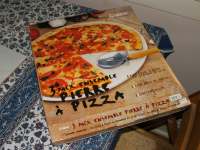 Pizza stones are available at most kitchen supply stores in the larger cities (and possibly the smaller ones too?) in Canada. They cost about $10 and often come with a pizza wheel inserted in the box. They may be a little lighter weight and thinner than a conventional bread stone but the advantage is that they fit easily into a barbecue and they work pretty much as well to protect bottom crusts from burning to cinders. 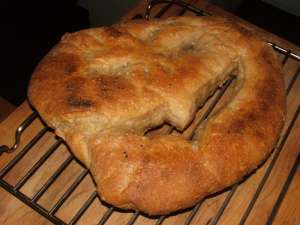 The traditional shaping for fougasse is in a leaf or ladder shape. But it can be shaped in any way you want. This was an attempt at a Jack-o-fougasse. I’m afraid I didn’t open the eyes enough before baking it.

Robertson shapes his fougasse and allows it to rise (covered with a tea towel) for 2 to 3 hours. Wells shapes and slashes her shaped fougasse at the same time and allows the fougasse to rest for about 10 minutes before baking it. Beranbaum also shapes and slashes at the same time, allows it to rest for about 15 minutes before baking and suggests using scissors (and gentle pulling with fingers) to open up any of the slashes that have closed during that time.

Here are three of the dough recipes I’ve used to make great fougasse: 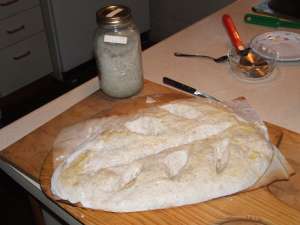 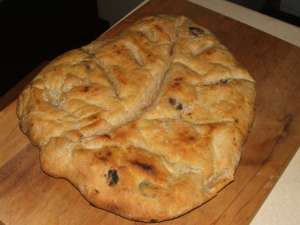 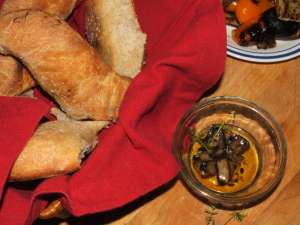 I’m a little less casual about measuring for baguette dough and usually use our digital scale to weigh the ingredients. This is enough to make one medium-large sized fougasse and two baguettes.

Mixing on the Evening Before Making the Bread

Mixing on the Day for Baking the Bread

But I LIKE warm bread right out of the oven: If you wish to reheat leftover fougasse, put them on the top shelf of the hot barbecue for a few minutes. OR… turn the oven to 500F for 5 minutes or so. Turn the oven OFF. Put the fougasse in the hot oven for ten minutes.

I haven’t yet made Rose Levy Beranbaum’s fougasse (remind us to get some walnuts!) And I really must try Susan’s Gorgonzola Fougasse With Figs and Pecans (remind me to get figs at the same time as we get the walnuts!). But I have made fougasse with poppy seeds to go with grilled salmon.

Yes. We love fougasse so much that we can’t stop making it! I’m thinking that once you start making it, you won’t be able to stop either.

I am very pleased to be the host of October 2011’s Bread Baking Babes’ task. Here is what I wrote to the BBBabes:

All were a little different but all were equally delicious. Of course, I’m hoping that you too neeeeeeed to make fougasse and will now bake along with us.

To receive a Baking Buddy Badge to display on your site: bake fougasse in the next couple of weeks and post about it (we love to see how your bread turned out AND hear what you think about it) before the 29 October 2011.

Here’s how to let us know:

If you don’t have a blog, no problem; we still want to see and hear about your bread! Please email me with the details so your fougasse can be included in the roundup. 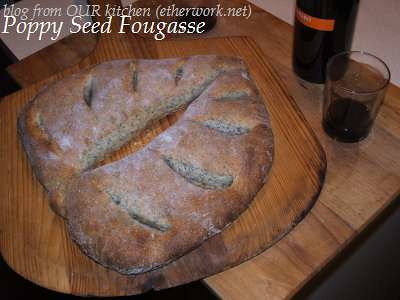 In ancient Rome, panis focacius was a flat bread baked in the ashes of the hearth (focus in Latin). This became a diverse range of breads that include “focaccia” in Italian cuisine, “hogaza” in Spain, “fogassa” in Catalonia, “fugassa” in Ligurian, “pogača” in the Balkans, “fougasse” in Provence, “fouaisse” or “foisse” in Burgundy. The French versions are more likely to have additions in the form of olives, cheese, anchovies etc, which may be regarded as a primitive form of pizza without the tomato. There is also in Portugal the “fogaça“, a sweet bread.

Fougasse was traditionally used to assess the temperature of a wood fired oven. The time it would take to bake gives an idea of the oven temperature and whether the rest of the bread can be loaded.

8 responses to “fougasse IS different from focaccia! (BBB October 2011)”