(I don’t usually condone carving a pumpkin before the afternoon of Hallowe’en but just this once, an exception can be made for this particular occasion.)

On Hallowe’en night, we like to have dinner prepared before the hordes of costumed children start trooping up the steps in search of candy. And we like to make sure that it will be something that is warming because by the time we dine, we’ll have spent at least an hour on the chilly porch chatting with neighbours, admiring costumes, trying to get rid of any extra candies as the kids start thinning out, and exclaiming over the lack of Unicef boxes.

And once the candy has run out, we blow out the candles in the pumpkins, say hasty goodnights to any neighbours who still have candy and “sorry!! we just ran out” to any kids who have suddenly materialized, turn off the front lights and race inside to have either chili con carne with cornbread or refried beans casserole with cornchips. It’s always very difficult to decide which one we’ll have… they’re both so good. 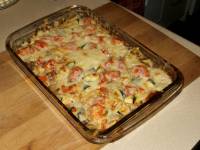 Because, even though it is me (I??) saying it, I make brilliant chili and brilliant refried beans. I really do. We think they’re the best.

And I have no idea if either are authentic to their origins but we don’t care.

Actually, I do know that the refried beans casserole can’t possibly be authentic because I always add garam masala to the beans.

Yes, you read that right. Garam masala. Not exactly the spice mix one would expect to see on South American and Mexican shelves, eh? 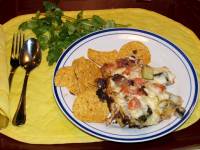 It adds that certain je ne sais quoi that makes the dish complete. And don’t worry. It does NOT seem Asian flavoured at all…

I adore this dinner on a crisp cold night. Hmmm, maybe we will have refried beans on Hallowe’en night. (click on image for larger view and more photos)

In Indian cooking, garam masala is generally added at the end of cooking. But all bets are off if it is used in quasi Mexican cooking…. We often buy premixed garam masala from our Indian grocer (Kohinoor Foods on Gerrard St. in Toronto). There are several variations on the spice mixture but generally, even though garam masala means ‘hot spice mix’, it is not a particularly hot mixture – it rarely has any chili heat. I just asked the resident expert about the meaning and he says he believes it is called “hot” because it is a spice mix to be added to hot (as in temperature) food.

We have also made our own garam masala:

We use garam masala in

For more information on garam masala and individual spices that go into the one we make, please see

For complete details on how to participate in Sir VIII, please go to:

I just heard that we will be seeing zero Unicef boxes this year! We wouldn’t even have been allowed to go out for Hallowe’en if we didn’t have Unicef boxes strung around our necks!

UNICEF Canada has evaluated the programme and has set a goal to reduce expenses and increase funds raised so as to be able to support more children around the world. […] So this year, instead of students collecting change in the UNICEF box on Halloween night, schools and participating children will undertake fundraising activities throughout the month of October.

Read more about how to donate to UNICEF: