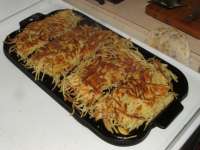 When I was putting together the post about mandolining radishes for radish butter, I was amazed to see that I have never reported about how we make our version of hashbrowns/potato pancakes/latkes.

Because a mandoline is perfect for cutting the potatoes!

For the hashbrowns/rosti, we simply mandoline the potatoes, salt and pepper them and fry them in oil. For the latkes/potato pancakes, we add an egg and a bit of flour. Not terribly tricky or complicated, is it? But the flavour and texture is spectacular.

Rosti are great for a special dinner of a grilled chop with a wine reduction. They are equally great for breakfast (but call them hash browns because it’s probably wrong wrong wrong to serve rosti for breakfast). We like them with eggs, bacon and toast (yes we’re extravagant that way). Or on their own with yoghurt and caramelized onions. Or with apple sauce….

No doubt, latke officianados will scoff when they see what we call latkes. But trust me, they are wonderful!! And they aren’t nearly as gummy as some of the latkes I’ve had in Jewish delis. Maybe gumminess is de rigeur for correct latkes, but we don’t care. We’d rather have our incorrect non-gummy latkes. 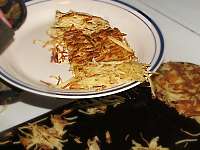 I confess that I have never mandolined potatoes. I really do manipulate T into operating the mandoline whenever I can. The blade terrifies me and the Benriner guard is on the small side, designed for delicate Japanese hands.

I know. That makes zero sense. I’m the one with the right size hands for the Benriner. But where there’s fear, there are accidents. So it’s MUCH better for T to do the mandolining. Besides, why else would his nickname be “Il Cotello”?! (Here is the real reason for the name.)

So… here’s what T does to make these wonderfully lacy potatoes:

Serve with grilled chop. Or bacon and eggs. Or….

* We usually use Yukon Gold potatoes, but any good baking potato will work. If you decide to cut the recipe in half, don’t bother trying to use half an egg. Just throw in the whole thing; it’s not going to make that much difference.

Can this be true?! Have I never posted about scalloped potatoes, except by the rather small mention last Easter?! They are a staple for us in the winter! As soon as the leaves start turning, I must remember to bring the camera out just before dinner so I can rave about them with photos!

It drives me crazy that Firefox keeps telling me that “mandoline” is misspelled. And I began to doubt myself. But the pocket Oxford dictionary beside the desk has reassured me that both “mandolin” and “mandoline” are correct.