I’m calling [this] hash, for lack of a better word. Whatever its proper name, this is magic draining on a paper-towel-lined plate – Vivian Howard, Chapter 18: Okra, Deep Run Roots, p404

In late June, in the middle of reading the okra chapter in Vivian Howard’s truly wonderful book, “Deep Run Roots”, we immediately put down the book, jumped on our bikes and sought out okra to make okra hash for that night’s dinner. 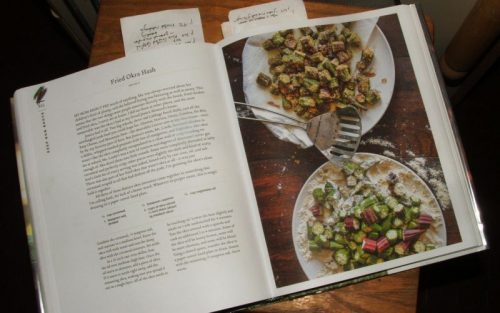 Because, unlike many poor misguided people, we love okra. Or rather, we love okra as long as the scary slime has been cooked out of it.

When I was growing up, the only time I had okra was in Campbell’s chicken gumbo soup. I sort of liked it because each of the little coins looked like a wagon wheel. As I recall, there wasn’t much flavour though. But until I was an adult, I had no idea that the vegetable oozed when it was cut open! 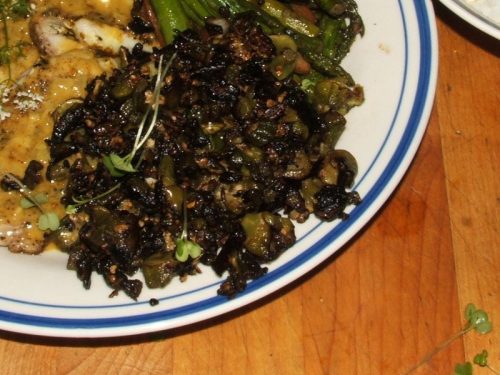 It wasn’t until I met T that I had fresh okra. Near the time I met him, as he cut open the vegetables he called “lady fingers” or “bindi”, he assured me that the slime would disappear. And then, he prepared the most wonderful Indian-style okra, frying it with Indian spices until it became chewy. Now, okra is one of my favourite Indian-style vegetables.

Of course, okra is not particularly associated with India. When they see okra, most people (North Americans, anyway) automatically think of Creole cooking and gumbo.

If the South had a mascot, it would be okra. Loved, hated, misunderstood, defended, and worn like a badge that defines you, both okra and my region’s people go out into the world pridefully carrying the same baggage.
You love, hate, or have an unfounded fear of okra […] [I]t’s only one part of okra that tends to bother people: the slimy seeds. People who hate okra […] tell exaggerated stories about the childhood encounters that scarred them for life. Okra’s reputation is so bad, some people won’t even try it.
[…] Until my job forced it on me, I rarely ate okra. I also feared slime, fuzz, and green things growing in my mouth. […] I had to go work on some okra. What I found is that the maligned slime is actually very useful when harnessed and celebrated. I tasted crisp okra pods by themselves and learned that okra has a sweet, green, pleasing flavor distinct from everything else, but it isn’t too demanding-not a show stealer. I also discovered all sorts of ways to work around that infamous slime and how to find more and less of it.
Now I seek okra out. I want to cook with it. I want to change people’s minds about it.

My mom didn’t fry much of anything. She was always worried about her children’s level of plump, and she believed frying was fattening as well as messy. This meant that the two things most people associate directly with the South, fried chicken and fried okra, I never ate at home. I did eat them at other places, and the most memorable was the okra I had at my friend Jessica Howard’s house.
Jessica had it all. Two big wheels, three real Cabbage Patch Dolls, and all the newfangled junk food you could hope for. Cheetos, Doritos, Oreos, Combos, Ho Hos, Easy Cheese, and Mountain Dew-the desirables I never saw at my own house-were by far my favorite part of hers. But Jessica’s mom, Ms. Linda, browned chicken in a skillet, whipped mashed potatoes with lots of margaine, and fried okra. […] Ms. Linda’s [fried okra] was a mix of textures and degrees of doneness I never got enough of. She sliced them into little rounds. Some were completely shrouded in salty cornmeal and perfectly crisp; other pieces were slightly too dark and kind of nutty. And a little bit of every serving was naked, kissed only by cast-iron, oil, and salt. 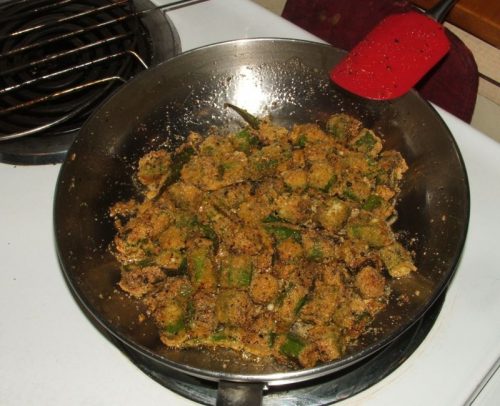 We adored Vivian Howard’s okra hash! So the next day, we made it again, adding a few Indian spices to the cornmeal. It was even more delicious that way. The cornmeal stays nicely crunchy; the okra gets chewy and/or crispy – but not even remotely soft and slimy.

And it’s insanely easy to make. 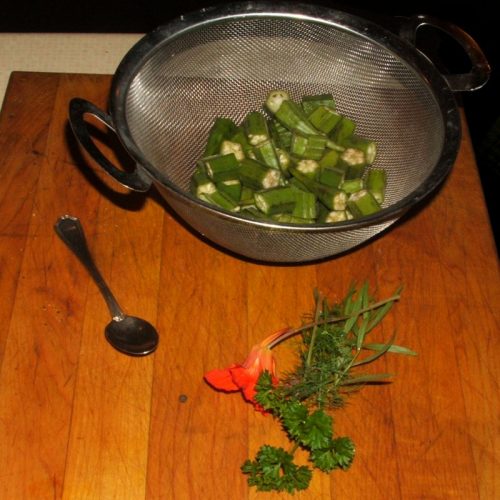 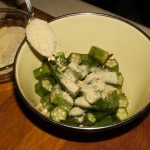 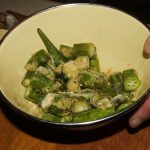 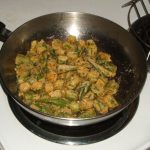 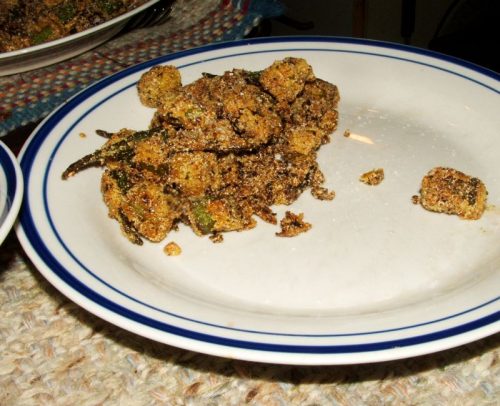 We decided we loved okra hash so much that the following day we went to the up-market organic garden center to get okra seeds, so we would get a chance to try the hash with our own okra. It turns out that the photo in “Deep Run Roots” isn’t crazy; there is red okra as well as green. Of course, we chose red!

The gardener assured us that we weren’t too late to plant it and would have no difficulty with it. She said that many gardeners plant okra in stages to get around 3 harvests per season.

As soon as we got home, I planted some of the seeds. They sprouted right away and soon after, two more leaves appeared on each plant. And that’s how the okra plants have looked for weeks. I took this photo yesterday. 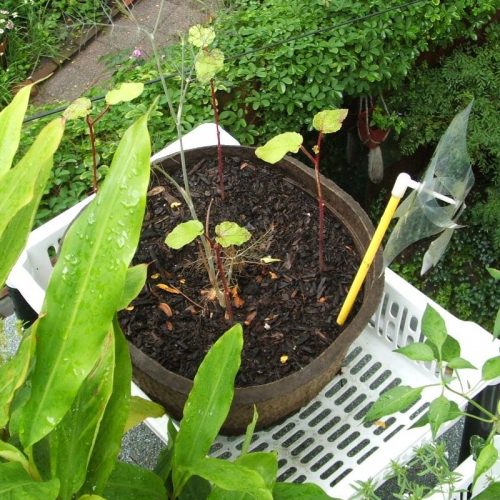 Happily, we can get okra from several different vegetable stores nearby. But it’s not red okra….

I haven’t lost hope completely though.

It’s only the middle of August. Grow okra plants! Grow!

By a miracle, we have had much better luck with the other plants on the balcony. The herbs especially are flourishing: basil, summer savory, thyme, chives, tarragon, parsley, lovage…. We are also growing cranberry beans, a devilishly hot pepper, and “Empress of India” nasturtiums. The nasturtiums are not only beautiful but they taste fabulous as well. 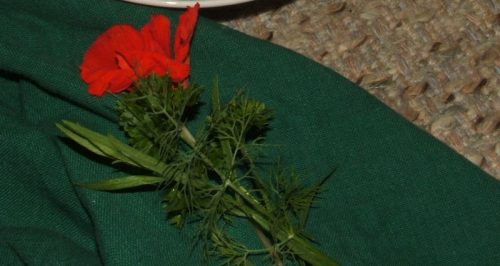 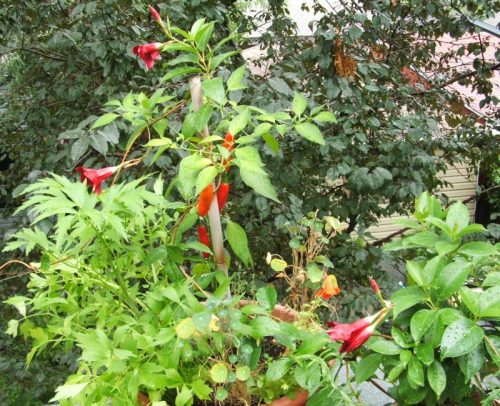 We also tried Vivian Howard’s okra oven fries. How could we not, after this description?

Okra Oven Fries Okra cooked in the oven like this are a revelation. The first time I did it, I planned on having them as a side with dinner, but I ate every single piece before we sat down and concluded they were more appropriate as a snack.

Well. They were good. Really good. But, we’re not sure that they are as wondrously good as the okra hash.