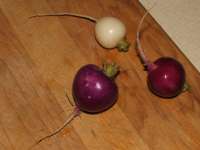 I rediscovered the wonders of radishes this past week.

Now that the growing season has begun, our local farmers’ market is back outside on its weekly schedule. Yay. Last week I got the most beautiful radishes – dark red, pure white and tomato red.

As I looked through the various bunches of radishes on the market table, I asked for one that had the best looking leaves because I wanted to cook with them. You wouldn’t have believed the reaction. The young really hip-looking vendors both looked a bit doubtful and I think they thought I was completely out of my mind.

he: (wide-eyed) You can eat the leaves?!

she: Really?! (trying to mask look of horror)

me: Yes, they’re great in an omelette.

We looked through the bunches and chose the one with the nicest looking radishes and almost the nicest looking leaves. (Apparently, flea beetles have been a problem and are eating little holes in the leaves.) I still can’t quite tell if after I bought my bunch of radishes that they believed radish leaves were edible.

Surprisingly, even though they looked so beautiful, the radishes themselves were just a little disappointing. They were a little too sharp tasting – not quite enough residual sweetness. However, all was not lost. I still had the greens….

I WAS going to make an omelette out of them. 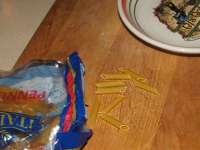 After playing in the garden, admiring newly transplanted herbs and being thrilled that tarragon actually survived the weird winter (our mint didn’t!!), I had about 20 minutes to throw together a quick pasta dish for dinner.

I rummaged through the fridge to see what was there, grabbing a little piece of brie, some left-over roast chicken, half a head of broccoli, the jar of grainy mustard and oven-dried tomatoes from last September. And I thought I’d have a few crisp radishes on the side. And suddenly, even though there was clearly plenty there already, I decided to use the radish greens too.

And as I was cooking the onions, I made another sudden change in direction. I sliced the radishes very very thinly and threw them into the pan.

I loved the radish slices. Who knew that their flavour could improve so dramatically?

Did I take a photo of the finished dish? Ha. No. That would have meant doing some planning ahead. (I did think about getting the camera but I’m afraid I was just too entranced by the flavour.)

Remind me to take a photo the next time I make this. Because I will be making it again. It was fantastic.

I was going to make it again this week. But when I got to the farmers’ market, all the radishes were sold out. Augh!!! Next week, I’ll make sure I get there earlier.

Over three years ago, Ruth (Once Upon a Feast) created this weekly event for people to share their favourite pasta dishes. Rachel (The Crispy Cook), is hosting PPN this week. I’m afraid I completely forgot to take a photo of the radishes with their tops still on. I seem to be going through posting doldrums. I’ve got dozens of ideas for posts and photos to go with them. But I find myself entirely unable to focus. I start one post and get distracted by another. Then I’m just distracted. Maybe I’ll grow out of it.

In the meantime, I think I’ll go down to the kitchen and smell the lilacs wafting in from the kitchen window. Yes, that’s the sort of distraction I’d like now.

edit 28 May 2010: Rachel has posted the PPN#165 roundup. Ooooh, the pasta dishes look so good… (Ha! And look at those lovely radishes at the top of Rachel’s pages!)