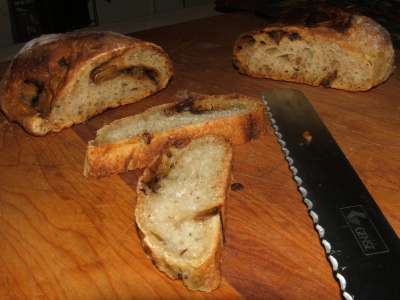 Remember when I said last month that the Babes seem harmless? Well, now I’m not so sure. The gloves are off and they’re getting serious.

…something wicked this way comes.

This month we BBBabes are making Garlic bread. That’s right: Garlic. With a capital G. This is not just a couple of cloves. The recipe calls for 3 heads of garlic.

My second thought was “must get parsley”.

My next thought was “parsley, smarsley… just give me some of that garlic bread”.

Sigh. Starting just under the wire again. And later in the day than I thought. I had great plans for starting really early this morning.

I made a few executive decisions and decided to add a little whole wheat flour and ground flax seeds to the starter.

I’m nervous. Nothing has gone awry and everything looks completely normal.

12:00 pm Oops. I forgot to notice exactly what time it was when I actually finished mixing the dough. (I’m hopelessly slow in the kitchen – I can’t stand being efficient :-)). But I’m guessing that it was about an hour ago. So, I just stirred the starter, as per the instructions. (Look at me reading the recipe!!)

3:18 pm Why do I persist in congratulating myself that I can read?! I dutifully went down to the kitchen at 1:00 to make the rest of the bread. And only then noticed that I was really supposed to have made the garlic filling.

Luckily, the starter wasn’t bubbling quite as merrily as I expected, so I left it in the oven (with only the light turned on) and started to work on the three heads of garlic.

Pouring boiling water over top and simmering them for 5 minutes sort of went against the grain. I wondered why I couldn’t just have peeled them and oven roasted them in some oil, the way we normally do.

But I am an obedient BBBabe. I plunged the simmered garlic into cold water and proceeded to peel the cloves. Not an easy task!! They’re slippery little devils. Once again, I wondered why I couldn’t just have peeled them and oven roasted them in some oil, the way we normally do. It’s really simple to peel raw garlic….

Being a BBBabe who always (well, almost always) does what she’s told, I forged on. And read that I was supposed to have fresh rosemary.

I made another executive decision and got some fresh basil (left over from Thai-style soup) out of the fridge. And got the rest of the ingredients out at the same time.

I watched the cloves like a hawk. I really didn’t want to burn them!!

If you burn the garlic the flavour is nasty and you will have to start again, or serve it to your friends with a straight face, so watch them carefully.

(I’m still wondering if Lepard is cautioning us to watch the garlic or the friends carefully.) 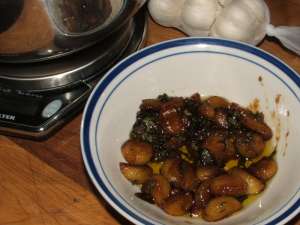 But again, everything went pretty much without any real difficulty at all. No burning was involved. Not even close. The garlic looks and smells wonderful.

Oh my!! Lepard is right; once the cloves are peeled and cooked, it doesn’t look like there’s that much garlic, does it? I wonder if I should have used four heads.

Once the garlic was done, the starter was bubbling like crazy. I measured out the flours and salt. The dough continued to act like normal dough. It’s very far from being croc-like (those BBBabes just want to scare me).

3:55 pm I’ve just finished the third oiling session and am waiting 30 minutes til the next one. Again, I’m nervous. Nothing bad has happened yet.

4:33 pm Still nothing bad has happened yet. The dough remains decidedly uncroc-like.

5:14 pm Nope. Nothing bad yet. The dough is wonderfully silky and nice. I just finished adding the caramelized garlic to the dough. I licked my fingers after putting the last piece of garlic onto the dough.

Wow!!! Good thing I didn’t taste this earlier. I would have eaten it all before it even had a chance to be incorporated into the bread. THAT part of this bread is a keeper, even if the bread fails miserably. Which I highly doubt.

I can’t wait to do the next step!

(errmm… I just read the section about the floured teatowel. Oh oh. Is this where things are going to explode on me?)

7:06 pm: Eeekkkk!! Look at the time! How did that happen? I’ve just now done the tea towel step (not as hard as I imagined) but what was Mr. Lepard thinking when he suggested using a serrated knife to cut this really flabby dough?

I used our serrated knife for the first cut and then switched to the dough scraper for the next two cuts. Much much easier!! And the dough is now resting until it’s time to put it in the oven. (THIS time I’ve set two timers to remind me of the hour.)

I contemplated adding a stencilled garlic design but changed what’s left of my mind. Why mess up something that is working so well? 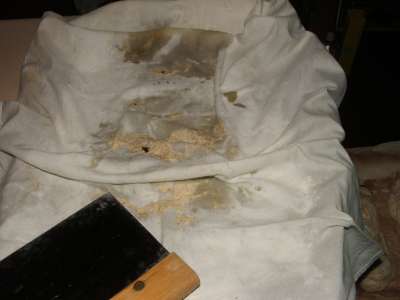 midnight: Aha!! I should have known that things were going altogether too well today. At around 7:30pm, I had a devil of a time removing the dough from the tea towel and onto the peel! Luckily, this bread is SUPPOSED to look rustic… but it was just a little trying to be expecting to simply carefully lift the flabby pieces off of the floured tea towel and onto the peel, only to find that I had to use the dough scraper to gently pry the loaves away (leaving a big clump of dough behind).

Not to mention that I was baking the bread during dinner, having to hop up and down from the table to the kitchen to turn the bread around half way through baking.

It took 40 minutes rather than 30 minutes to bake. I still haven’t tasted it and (as good as it smells) am going to wait until morning. 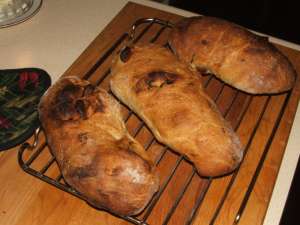 Doesn’t that look delicious? Too bad I have no way of uploading the aroma.

You must make this bread! Here’s the recipe we were to have followed. And here is what I did to the recipe:

1.) Water: Tap water is fine to use – just make sure that it has stood for at least 12 hours so that the chlorine has dissipated. Under no circumstances should you use water from the hot water tap. Heat the water in a kettle or microwave and add cold water until it is the correct temperature, (use the baby bottle test on the back of your wrist – your fingers have no idea of temperature!) Dan Lepard suggests a ratio of 1 part boiling water and 2 parts cold water.

Or you can use a thermometer. Lepard suggests a temperature between 35C (95F) and 38C (101F). Note that the temperature must be BELOW 48C (120F) because yeast begins to die when the temperature is higher than 48 C.

2.) Flours: Lepard calls for strong white flour. It has been increasingly difficult to find reasonably priced unbleached bread flour here so I used the ratio of 97% all-purpose and 3% vital wheat gluten (thank you Susan!!) to mimic bread flour. While I was at it, I decided it would be nice to add a bit of whole wheat flour and flax seed as well.

3.) Garlic Filling: Lepard calls for balsamic vinegar, 2 Tbsp caster sugar (extra-fine white sugar), 1 tsp salt and a sprig of rosemary leaves. I added a bit extra salt because we use kosher salt, which is much coarser. Also, because we didn’t have balsamic vinegar, I substituted with apple cider vinegar and then decided to use demerara sugar to get the caramel flavour that is missing from cider vinegar. Obviously, basil is not at all the same flavour as rosemary but I thought it would work. As soon as (ha; I should say if…) summer arrives, I’ll get a rosemary plant to try fresh rosemary. It will be interesting to taste the difference.

4.) Floured tea-towel: Oh my. That tea-towel is going to be a nightmare to clean. Next time I’m going to let the shaped loaves rise on lightly floured parchment paper directly on the peel. The parchment paper can be used again and it’s unlikely that the dough will stick to it. 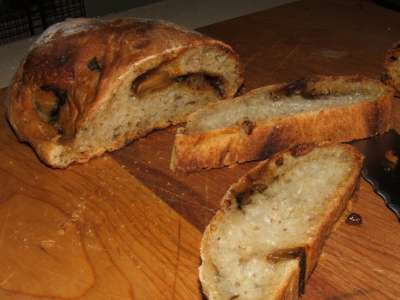 I tasted the bread this morning. It’s even better than I expected. And I was expecting it to be really really good. Oops!! I forgot to get parsley. Ach, who cares. Having garlic breath is such a small sacrifice to make. Excuse me while I go to have another piece….

If you’ve managed to stay with me til now, you’ll already know that you neeeeeeed to make this bread!! Go start now.

As you tuck into it, you will completely forget that it’s ridiculously cold and dreary outside.

Natashya (Living in the Kitchen with Puppies) is the host of April 2011’s Bread Baking Babes’ task. She wrote:

Dan Lepard has kindly allowed us to feature his Garlic Bread as our bread of the month and let me tell you – it is head-over-heels amazing. All you need for dinner is some of this bread, a great salad, and a bottle of wine.

Share it with the one you love. Only, tell them you made two loaves, because I guarantee you will gobble one down before dinner is ready.

This is THE most delicious bread! Thank you, Natashya!

I have only one question: why didn’t we make this bread before?

Of course, you’ll want to bake along and receive a Baking Buddy Badge to display on your site; bake the Dan’s Garlic bread and post about it before the 29 April 2011. 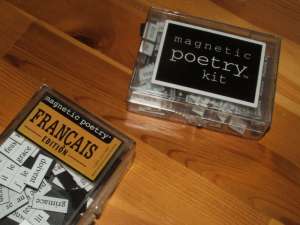 As I’m sure everyone knows, April is National Poetry Month, and November is National Novel Writing Month. Both are simply awesome.

The virtual boxes of Magnetic Poetry (was at play.magpogames.com) are very handy!

Today, I took tiles out of the “Artist” online Magnetic Poetry box. Here are your randomly chosen tiles (in alphabetical order) for round 8.

shard s shimmer the then

For how to play OUR version, please see the Magnetic Poetry Rules. For more information about RePoWriMo, please read the following: 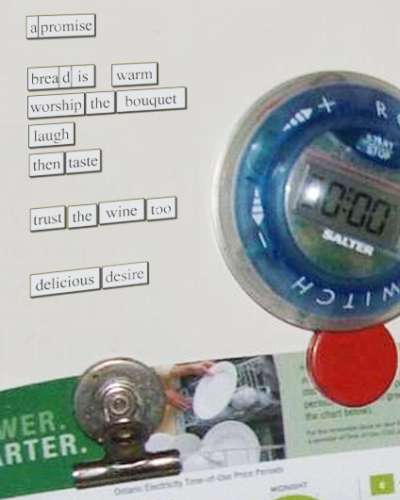 Once again, you will want to compose your poem(s) before seeing what I did. Here is my composition from the words listed above. I composed two poems this time round. The first poem’s subject is specific to this wonderful garlic bread. I also composed a third poem (using tiles from the “Romance Edition” at play.magpogames.com) after having a magnificent lunch of Dan’s Garlic Bread with stirfried eggplant, red pepper, mushroom, tomato and ham.