I had planned to post this yesterday, in time for WHB #85 but my webhost server crashed and did not become available until today. Consequently, I’m insanely early for 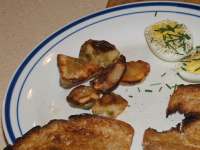 An article on sunchokes (aka sun roots, topinambours, Jersusalem artichokes) in SAVEUR magazine caught my eye. Apparently sunchokes are native to this area of North America.

They were “discovered” by Champlain and taken back to Europe with the name patates de Canada where they were either confused with potatoes or preferred over potatoes! I did a little more reading about the sunchoke in The Harrowsmith Salad Garden by Turid Forsyth & Merilyn Simonds Mohr:

Back in its native land, however, it was not highly esteemed. In 1737, Mother de Sainte-Helène reported that famine had reduced the inhabitants of Quebec to eating Jerusalem artichokes “and other things not fit for human consumption.”

Well, I wouldn’t go so far as Mother de Sainte-Helène. It’s true that if given the choice, I’d far rather have potatoes. But sunchokes are not bad at all.

The SAVEUR article (December 2006 “Winter Sun – Jerusalem artichokes are a cold-weather favourite whose taste is sweet and warm” by Shane Mitchell) features a recipe for them sautéed in butter and garnished with fresh thyme. Mitchell writes that in the 1700s sunchokes would have been

boiled, dipped in a wine batter, fried and then served with a sauce blanche or à la moutarde.

We thought about how we should cook them and decided that we wanted to prepare them as simply as possible so we would really get a sense of their flavour. We peeled and cut the sunchokes and covered them in olive oil. Most books say to douse them in lemon juice and water solution immediately after cutting because they discolour. And they do indeed discolour quickly.

We tasted a bit of raw sunchoke – sweet, crisp and blandly flavoured, somewhat reminiscent of both waterchestnut and cucumber. The rest of the sunchokes we oven-roasted (in the toaster oven) for around 15 minutes til they were golden.

We sprinkled them with salt and served them immediately with buttered toast, hard boiled eggs and chives from the garden. The flavour of the cooked sunchokes was sweet and reminded me of actual chestnuts (as opposed to water chestnut) with a hint of artichoke flavour.

Would I have them again? Yes, but only if they come out of the garden. I wouldn’t go out of my way to buy them….

Even though chives are featured in this post for Weekend Herb Blogging (WHB), I have chosen to focus on a vegetable: the sunchoke. Happily, Kalyn, who is the creator of WHB, has allowed a very broad interpretation of “herbs”.

Entries can be recipes and/or informative posts featuring any herb, plant, vegetable, or flower

Last week, WHB was at home with Kalyn (Kalyn’s Kitchen) This week, WHB is on the road again and hosted by Ulrike (Kuchenlatein). 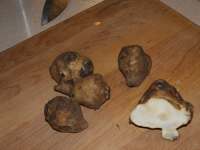 I tried to find sunchoke roots at the garden center. No go. We bought these sunchoke roots in Kensington market at one of the vegetable stores. Sunchokes aren’t cheap!! I don’t know where they came from but I’m guessing not far from here. They were in a box by the cash register at the vegetable store. I’ve seen them before but had no idea what they were. (Now that I’ve looked at a picture of the flower, I know I’ve seen them growing in many gardens nearby….) A woman in front of me in line bought a couple of the roots, saying she was planning on planting them. What a good idea!! So I did the same.

The larger root had lots of knobs on it – perfect for planting. The other day, I put some of the eyes from that root into large pots on the patio in a section that gets a fair amount of sun and some into the ground in a section that is in partial shade. I am hoping to be able to try eating sunchokes again in the fall – from OUR garden.

They’re quite sweet tasting and can be eaten raw or cooked. But apparently they aren’t necessarily easy to digest. The Harrowsmith Salad Garden suggests serving fresh dill with them to aid digestion. (Heh. I guess I have an iron constitution because I didn’t have any difficulty.)

Turid Forsyth and Merilyn Simonds Mohr have good advice on growing and serving sunchokes. They wrote in The Harrowsmith Salad Garden:

The sun root is a hardy perennial sunflower that thrives even in northern zones. […] Each plant grows to about 6 feet in height, with coarse, hairy foliage and bright yellow flowers 2 to 3 inches across that bloom profusely in late summer. After the leaves fade in the fall, the tubers can be dug up like potatoes or left in the ground, mulched with dead foliage and lifted as needed durein gthe winter. [Harvest is often delayed] until spring, when the frost has made the tubers sweet. […]
Sun roots grow in virutally any soil but prefer full sun or light shade. As the plants begin to grow, draw soil up around the stems, then leave them alone.
[…]
[S]un roots […] are best used as soon as they are dug. A 3½-ounce serving of freshly harvested raw sun root contains 7 calories; the same amount of stored root has 75. The sugar in sun root is inulin, which […] can be safely eaten by diabetics.
[…]
To prepare sun roots, scrub off the soil under running water, then peel, dropping them immediately into acidulated water to prevent darkening. Cooked sun roots resemble potatoes and, in fact, can replace that vegetable […] Or try serving them sliced, steamed […] dressed in a lemon juice/walnut oil vinaigrette. Raw sun root is more like water chestnut, wonderfully crisp and succulent, with a slightly sweet, nutty taste. Shred raw and dress it as slaw, cut it into fingers for dipping, or slice it for pickles. […] Sun roots are especially good with tarragon and sorrel.

Oh, and what about the name “Jerusalem artichoke”? Apparently, Champlain thought they tasted like artichokes. Then the Italians named the plant girasole articiocco which could easily be misheard and translated as “Jerusalem artichoke” by English speakers. At least that is the speculation….

If you would like to participate in WHB#86, send your link with *Weekend Herb Blogging* in the subject heading to ostwestwind AT yahoo DOT de by 15:00 MDT on Sunday 10 June, 2007. To learn more about WHB and complete details on how to participate, please go to: