summary: Why I am ending our almost 20 year relationship with SAVEUR Magazine;

I’m taking Mr. Sachs at his word and in my usual long-winded way, am writing down what I think.

My SAVEUR suscription is about to expire; I recently received a letter of reminder from them telling me that it was time to renew.

There are any number of reasons why you might have overlooked renewing your SAVEUR subscription. Perhaps i just slipped your mind. But the fact is your subscription is quickly running out. And whatever the reason, unless you act promptly, you’ll soon be without SAVEUR.

I’m new here. This is my third issue in the editor’s seat, and while we’re not planning a gut renovation, you might notice a few changes around the place. In the coming months we’ll be tinkering with the recipe a bit, bringing in new voices, refreshing the look and feel fo the brand, and relaunching our website […] Keep in touch and let me know what you think.

SAVEUR is a magazine for people who experience the world food first. Created to satisfy the hunger for genuine information about food in all its contexts, the magazine emphasizes heritage and tradition, home cooking and real food, evoking flavors from around the world (including forgotten pockets of culinary excellence in the United States). It celebrates the cultures and environments in which dishes are created and the people who create them. It serves up rich, satisfying stories that are complex, defining and memorable.

In every issue, you’ll:

Well that certainly used to be the case. In fact, each magazine was so full of enticing new ideas that it took several days to get through the magazine. We did indeed savour virtually every page.

And then we started finding flaws. Was it us? Were we being too demanding? Initially, we thought that was probably the case.

It started with the change in the look of the cover. Suddenly the cover looked just like every other magazine cover on the supermarket rack.

Then it became increasingly difficult to distinguish between actual content and advertisements. Except the advertisement images were often better quality than the magazine’s photos.

Still, the writing held us in thrall. It was articles like Colman Andrews’ article “The Italian Torta” in SAVEUR No.27 that started our love affair with SAVEUR in the first place and then kept us entranced with almost consistently brilliant writing, notably “Hearts and Minds” by Felicia Campbell in No.157. As well as Andrea Nguyen’s poignant memoir “Gifts from a Vietnamese Table” in No.57; Rich Lang’s “Truly a Remarkable Plant” in No.83; Margo True’s “The Pleasures of Strudel” in No.89; “In Deepest Italy” by Francine Prose in No.120; Beth Kracklauer’s article “Season of Plenty: Yunnan’s Mushroom Harvest” in No.140; etc. etc. – all of the articles invariably including one or two excellent recipes as added bonuses.

These were articles that spoke to us, that pulled us deep in to see brief – but not too brief – brilliant glimpses into a world so different (and yet the same) from our own.

When I got to the front and saw the handwritten sign that simply said “$2” and handed over the money, I didn’t look up at the owner of the brown hands that passed me a Styrofoam plate lined with thick, soft, warm flatbread topped with half a chicken. […] I know I’m unlikely to ever see them again, but I still long to thank them for feeding me. With that simple grilled chicken, they nourished my humanity, so often the first casualty of war.

On April 23, 1975, a week before the fall of Saigon, my mother filled her handbag with her best jewelry, a couple of photographs, a bottle of water, two packets of dried instant noodles, and an orange notebook containing her handwritten recipes. Then my father locked the door to our house in Saigon for the last time, and we drove silently away.

-Andrea Nguyen, “Gifts from a Vietnamese Table”, SAVEUR No.57

It’s been almost three years since I first went to Matera [in Basilicata] and fell in love with a pepper. Not just any pepper, but the peperone di Senise, a sweet Italian red pepper with the complicated, smoked-caramel tang of a mild red Mexican chile.

And that’s just the tip of the ice burg!

However, in the last three issues, after the sudden departure of James Oseland as editor-in-chief, SAVEUR has made significant changes. I don’t know if it is entirely due to the new editor-in-chief, Adam Sachs’ influence. But whoever is responsible certainly isn’t interested in keeping people like us on board.

I confess that I didn’t really notice with No.171, “The Saveur 100”. It’s never been my favourite issue anyway. The articles are short; many of them simply seem to be advertisements for restaurants or stores that are far away or too expensive to even contemplate.

It was with No.172 that I saw glaring changes. As usual, I began at the beginning of the magazine and started turning the pages in search of a decent sized article. And there it was {yay!} on page 28, something that looked very promising, Key Ingredients: “The Shape-Shifting All-Purpose Power of Cauliflower” and a wonderful photograph of charred cauliflower. Excited, I read the opening paragraph. And turned the page.

Alas, no. I was wrong. There was no article; there was simply the one paragraph, followed by some recipes. They looked good. But we can get recipes for cauliflower anywhere….

I turned some more pages to see photographs of various dishes with a tiny bit of accompanying text. And more recipes. Then at last! There, on page 55(!), was the lovely long and interesting feature, In Chablis, It’s Called “Rock Juice” by Adam Leith Gollner. This is what I’ve come to expect from SAVEUR!

I decided that even though the magazine was clearly going through some changes, maybe things were okay. Even though someone at SAVEUR foolishly thinks that “Moment” on the back page needs to be changed into “a meal to remember”.

In the past, it would take me several days to savour every page of a SAVEUR issue. Yes, I used to read every page. Even the ads. “Moment” was the place I would reach with a little sigh, gaze at the usually evocative image from days gone by and then riffle back through the magazine to reread favourite parts. Waiting until the next issue arrived in the mail. Which was generally the next day. If it hadn’t already arrived the day before.

Well. I finished No.172 a good two or three weeks before No.173 arrived. I confess that I did not read every word. In spite of the fact that there are so few words. And when No.173 did arrive, I eagerly opened it up. To be disappointed. And annoyed. The first half of the “Spring Issue” is page after page of recipes. Sure, the photos are lovely. The recipes are probably fine. But where are the articles?!

Finally, half way through the magazine, one appeared, “The Food Lover’s Guide to Growing a Garden”.

Or was it an actual article? It looks like a housekeeping magazine article with generic-looking drawings by QuickHoney (not even a person?) and brief, very basic gardening tips aimed at someone who has possibly never stepped foot past a paved footpath in a public garden.

I quickly turned the page. If I couldn’t see it, maybe my disappointment would disappear. The next page looked a little more promising. But, it too turned out to be just a giant photo spread with a few paragraphs of text.

I turned the page and thought I hit paydirt on the next page with a salad article…. Nope. While there are a few recipes, it’s really just a glorified advertisement for expensive table settings.

And suddenly, I was on the last page. Not feeling sated. Not seeing a delightful “moment”. Instead there was “A Meal to Remember” featuring a (granted, wonderful) photo and what should have been the introduction to an actual story in the single paragraph finale entitled “All Night, Wine Filled Pig Roast” by Marcus Nilsson.

My subscription runs out in August. After almost 20 years subscribing to SAVEUR Magazine, it is with many regrets that unless there is a major turn-around in the next couple of months, we have decided not to renew our subscription….

Does anyone know what we should replace it with? 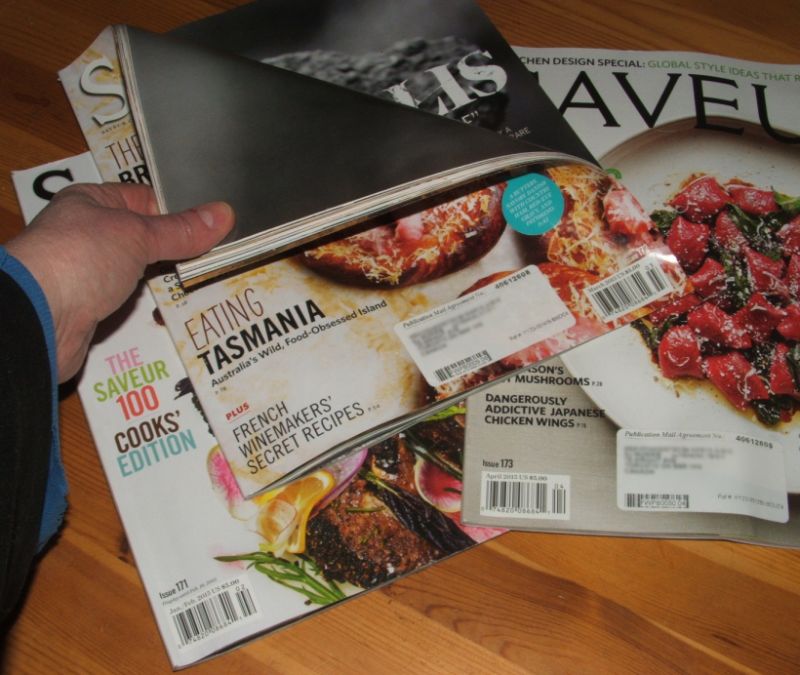 The end of an era?

Grubstreet.com interviewed Adam Sachs to ask him about his plans for SAVEUR magazine.

[O]ver its 20-year history, Saveur has more or less ignored trends and really just done its own thing: telling deep, elegantly written stories about what makes food so meaningful to people all over the world. In a way, it remains a throwback to a different era of food writing.

– Adam Sachs, in “Saveur’s New Editor-in-Chief on His Plans for the Storied Magazine” by Alan Sytsma, grubstreet.com, 25 September 2014

Why is this a throwback to a different era? Are subscribers suddenly incapable of reading more than 25 words at a time? Or is it simply too expensive to send writers to various places in the world to do the research?

11 responses to “Are we really saying goodbye?”