I’ve retrieved the other bacon photos out of the camera and as promised, here is a post telling exactly what T did to make the most wonderful bacon and the most fabulous lardons with the trimmings from squaring off the meat for easier slicing. 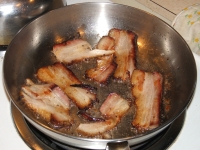 Mmmmm… bacon! Who knew that it would be so simple to make bacon at home?

After curing it for seven days, Ms. Bone suggests cooking the bacon in the oven. But we love smoked bacon, so T decided to cook our bacon in the barbecue – with smoking wood chips. For the first batch of bacon, we left the cap on (as per the SAVEUR instructions) while it was smoking. It was absolutely delicious but all the smoky flavour went into the cap instead of the bacon itself.

In fact, it was so delicious, even without the smoke, that we kept trimming more and more pieces off to make sure it was nicely squared off. Here’s how the conversation went:

T: I can’t believe that the SAVEUR article says to trim the meat before cooking it! Mmm, taste this, it’s fabulous!

E: That IS good! Hmm… you’d better trim that piece that sticking out a mm.

T: You’re right. It will be much easier to slice then.

E: That’s not quite straight.

E: There’s not much left, is there?

T: No. In fact, there’s not much point in putting this away.

E: Now YOU’RE right. We’d better eat it now. We wouldn’t want such a small piece to get lost in the fridge. 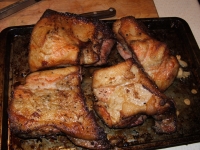 For the next and all subsequent batches of bacon, we took the cap off about half-way through the smoking process. It was even more delicious because the smoky flavour permeated the bacon.

Here is what T did to make bacon at home: 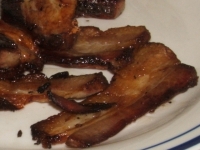 Apparently the bacon will keep in the refrigerator for up to 10 days or in the freezer for up to 3 months.

The spices are just suggestions. The only essential spice is the salt. Use whatever strikes your fancy. Ms. Bone used garlic and thyme in her bacon.

If you do not have a barbecue, you can also cook the bacon in a slow oven: 200F. It won’t be smokey, but it will undoubtedly be equally delicious.

T is in the process of curing a piece of butt roast to make a ham. It should be ready to smoke in time for Thanksgiving Day this weekend. I hope we can find a good looking winter squash to go with it. Perhaps we’ll have cauliflower au gratin, or scalloped potatoes too. Now that’s the way to give thanks!