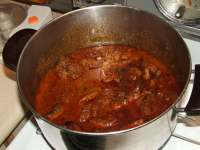 SAVEUR magazine is constantly thrilling us by giving us the most wonderful ideas. Interestingly, I completely ignored the goulash recipe in the October 2006 edition when I read through the magazine. Silly me. 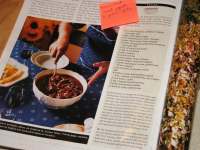 I mean really; look how appetizing the photograph is!! But I thought I didn’t really care about goulash. Why? I’d had goulash a couple of times before. And it was good but not something I would have energetically sought out to have again.

However, luckily for me, T was leafing through the magazine the other day and announced that we would try the ozpörkölt (Venison Goulash). But with pork rather than venison. And who am I to argue? Because whenever T is excited about making a new dish, it’s bound to be good.

We would have tried the goulash with venison if we had easy access to venison. But I can’t say that I remember seeing venison at the butcher shop – and no doubt it would be on the pricey side. Pork, on the other hand, is readily available and not horrendously expensive.

Naturally, we didn’t have all the other ingredients either but T improvised. The recipe called for Merlot, hot Hungarian paprika and green pepper. We didn’t have Merlot; we only had good robust Sangiovese. And we only had sweet Hungarian paprika and Thai chillies on hand. So T threw in Thai chilies for heat and the fresh pepper flavour. (Next time we might use banana peppers.)

And did our goulash taste correct? Well, we thought so. But then we’re not Hungarian…. Whether it was correct or not, it was phenomenal. The first night we served it with mashed (another mark against us! I hope the Hungarian goulash police don’t come after us… :whee:) rather than steamed parsleyed potatoes as suggested in the recipe. Delicious!! 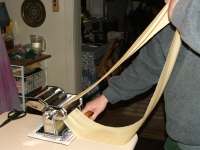 And a couple of nights later, T pulled out all the stops and made egg noodles. (click on photo to see more photos of noodle making)

He tossed the noodles in butter and toasted poppy seeds. Goulash with noodles and steamed green beans is even MORE delicious!! And a couple of nights later (it makes a LOT of stew!), we served the stew with mashed potatoes and steamed beets with toasted dill seed: still absolutely delicious!!

Goulash
based on recipe in SAVEUR (Oct.2006) 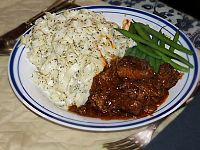 Did you remember to have shroves yesterday? We didn’t… we were too busy stuffing our faces with risotto. Remind me to report on it.

6 responses to “goulash: a new favourite”