summary: what? no bread this month? the other Bread Baking Babes managed to bake in time! (click on image to see larger view and more photos) 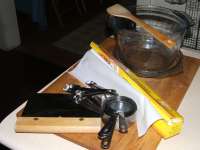 We have all the ingredients on hand. But as you can see, the mixing bowl is empty.

I’m going to bake the bread on Friday.

Well. This is a first. In the past, I always considered Friday the 13th to be a lucky day.

Yup. Life got in the way. And my window of opportunity to bake the bread in time for the BBB deadline is going to whoosh pass.

But we still have beer left and I will bake the bread soon….

In the meantime, here is this month’s BBB recipe. You’ll definitely want to make it. Soon.

While it is true that Canadians are well represented in the Bread Baking Babes, I thought it would be fun to do a Canadian themed bread with the most Canadian of ingredients – Beer! (Extra points for using Canadian beer.)

I hope I’ll make this bread in time for the BBBuddy roundup. I really do. Because the bread sounds fabulous!

Please take a look at the other BBBabes’ Granville Island Beer Bread. It really does look and sound fantastic!

To receive a Baking Buddy Badge to display on your site: bake Granville Island Beer Bread in the next couple of weeks and post about it (we love to see how your bread turned out AND hear what you think about it – what you didn’t like and/or what you liked) before the 29 April 2012. If you do not have a blog, no problem; you can also post your picture(s) to Flickr (or any other photo sharing site) and record your thoughts about the bread there. Please remember to email the Kitchen of the Month to say that your post is up.