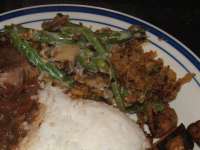 It might look a bit like dog’s breakfast here but you’ll have to take our word (and Alanna’s) for it. This really is the best green bean casserole!

I saw this casserole as a result of following the link to more recipes at the bottom of the post entitled “Quick Ways to Doctor a Bag of Green Beans” on Alanna Kellogg’s (A Veggie Venture) blog*. It was the title “World’s Best Green Bean Casserole” that caught my eye. And Alanna’s description of it kept me firmly on the page:

That’s a lofty name, World’s Best Green Bean Casserole. I might even go so far as to call it the World’s Best Casserole, bar none. It’s absolutely delicious.

I adore green beans. I neeeeded to make this! Firmly hooked, I read further:

Glup… canned onions? My only experience with canned onions is those horrible little pearl onions lurking in equally horrible canned peas of my childhood. The same three peas and one pearl onion that lay congealing on my plate on the kitchen table where I sat banished because I hadn’t finished my dinner. I would stare at them sadly, listening forelornly to the rest of the family happily chatting and laughing as they ate dessert in the dining room. And I thought, “Alanna wants me to sully green beans with those canned onions??” She must be crazy! We’ll make the casserole without the canned onions.

And off I went to approach T with the idea having a green bean casserole. I began by getting the topping out of the way. Scoffing, I asked T if he had ever heard of canned onions.

me: Apparently there’s a green bean casserole made with mushroom soup.

me: Let’s try it. It sounds good. We don’t have to use the canned onio…

T: (interrupting) Let’s have it tonight! And let’s buy some canned onions today! Wait til you try them! You’ll love them!! Come on!! Let’s go!!!

And of course, it calls for canned onions. As you may have already guessed, I was reluctant to use the canned onions. But we did because Alanna said we had to. (We’re very obedient.) Not to mention that it turns out that canned onions are fabulously crispy. They’re not at all what I was expecting. They’re wonderful!

But they can’t be good for us! Even though they were so fantastic tasting, they’re not exactly cheap. Reading the ingredients list, I see they’re also laced with hydrogenated fat. Next time we make the green bean casserole, we’ll stray and just caramelize our own onions. We’re guessing that we’ll like the casserole just as much.

Here’s what we did:

Serve immediately. Leftovers (if there are any) can be gently reheated in a slow oven and the casserole is just as good.

edit November 2008: We have made this casserole on a number of occasions. (It really is the best.) But since the first time, we have NOT used canned onions. Instead, T has sauteed onions in oil until they are beginning to colour and then added flour to crisp them up. They are easily as good tasting (if not better) than canned onions and WAY better for us. Because who knows how many nightmares of chemicals and preservatives are in canned onions?

* Alanna has put together the most wonderful resource of vegetable recipes. There are zillions, alphabetized by vegetable. Take a look!

A note about the amount of topping: Alanna suggested to use only half the amount of topping called for. I thought that sounded like a fine idea. But I don’t wear the pants in our kitchen (carry the serving spoon?) and T decreed that more is better. And I have to agree that lots of crumb topping is delicious. But I do suspect that if I ruled the world, we would be putting on half the amount and would still like it just as much. 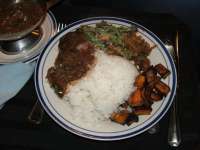 On this particular day, we served this fabulous green bean casserole with oven roasted sweet potatoes, rice and Faux Swiss Steak. We know we’ll be having this casserole many more times with many different dishes. (Wouldn’t it be wonderful with a roast ham?!)

While mushrooms aren’t exactly an herb, vegetables or herbs are allowed in the wonderful weekly event, WHB. 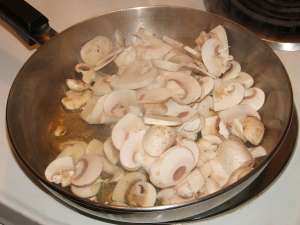 Mushrooms! They’re the best, aren’t they? A natural source of glutamate (the same flavour boosting glutamate that is in MSG – yes that dreaded substance that people think gives them headaches. It has been argued that it’s extra salt and sodium in the MSG rather than the glutamate that cause people to get headaches.)

White button mushrooms are the mushrooms that are most available to us. Of course, our vegetable stores have a huge array of other mushrooms as well. But the white ones are the least expensive and they do the job.