Ah, if only my connection hadn’t been going crazy, I would have posted closer to the EoMEoTE deadline… I’m probably too late, but who cares?

Shelldon’s brains felt scrambled. Yet another late night. Or was it just another very early morning? Whatever. The office doorbell was ringing. Too loud. Too insistant.

He opened one bleary eye, “Come on in; it’s open”.

And the legs walked in. Shelldon opened both eyes wide. He looked up. Yah, she was gorgeous. Dark hair, dangerous green eyes, chili red lips. She was hot. Almost too hot to handle. His kind of girl.

She said her name was Coriander L’Eggs.

Okay, that’s enough of that!! I won’t beat (ow!! make me stop now!) around the bush any longer…

click on image to larger view of green chili omelette

Onions, green chilis, coriander leaf (aka cilantro) and toast (of course). The omelette is even better with chapatis or naan, but I was lazy that morning and hadn’t made any.

Coriander leaf is one of those herbs that people either absolutely loathe or absolutely adore (we are in the latter camp); there seems to be no middle ground. We always serve coriander leaf in a separate bowl when we have guests so that they won’t waste any by pushing it discreetly to the sides of their plates or choking it down politely. No need for that! If they don’t like coriander leaves, it just means more for the rest of us!

Coriander is insanely easy to grow. But it does bolt quite quickly this far north. Which can be good if you love coriander seeds. Read here for more about growing coriander. 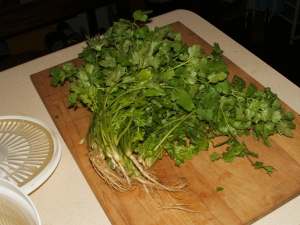