We make flatbread a lot – especially in the summer. It’s the perfect kind of bread for the barbecue. In fact, I can’t even begin to say how many times we have made focaccia, naan and pita on the barbecue! But of course, flatbread can be made indoors too – in the oven or on the stovetop.

When I saw that flatbreads were the theme for this month’s bread baking day, I knew that I could have made chapatis, naan, parathas, pitas, focaccia, tortillas or Tortas de Aceite again. (And yes; I could also have made more wildyeast bread – it seems to be turning into flatbread more often than not these days.

But for BBD, I really wanted to make something new. So I googled to see what other kind of flatbreads are out there. Happily, wikipedia has a HUGE list of flatbreads handily categorized by country. 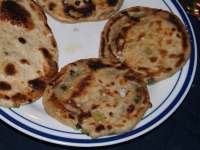 There near the top was Bing (China). I hit the link to find out what “Bing” could be. And lo and behold; one kind “Cong You Bing” is a favourite of mine: green onion cakes! For ages, I’ve wanted to try making green onion cakes!

I remembered that Barbara (Tigers and Strawberries) had made them so that was the first place I went. I also peeked at a few other recipes on the internet and saw that the recipes were all basically the same.

** Please note that a Canadian cup holds 250ml. When I measure flour, I really fluff it up in the bag before scooping out flour to roughly fill the cup.

*** This is still a work in progress and we have not yet figured out how to cook these cakes so that they will be light and flaky on the inside and golden and crisp on the outside.

We could fit three discs onto our tava. T was quite disapproving about the depth of the cakes and was very worried that they wouldn’t be flaky like the green onion cakes we’ve had at Chinese restaurants. He tasted one that was done earlier than than the others and asked me to roll the rest of the discs more thinly. More like paratha… So I did.

Our green onion cakes weren’t so disastrous that I became so disheartened never to attempt this again. In fact I still adore green onion cakes and we’ll definitely try this again at some point soon. (On the same token, it’s likely that we’ll be making paratha sooner. :-))

Thanks to Petra for this challenging theme for bread baking day!

(I have to reiterate that I am absolutely flabbergasted that I still haven’t done an official post with photos about making naan!)

Petra (Chili und Ciabatta) is hosting the seventh round of Bread Baking Day and has chosen “flatbreads” as the theme. She wrote:

Think of indian chapati, naan, dosa or paratha, of italian focaccia, ethiopian injeera, swedish knäckebröd, scottish oatcakes, turkish pide, mexican tortilla, jewish matzo, armenian lavash, south tyrolean Vinschger Paarlen… this list could go on and on. As there are so many pure flatbreads I would like you to exclude rich ones like pizza and related baked goods.

I would love you to participate and join flatbread baking day. All you have to do is bake a flatbread of your choice, take a photo and blog about it now and [1 March 2008].

For complete details on how to participate in BBD#07, please go to:

blog from OUR kitchen posts:

And finally, before completing your BBD post, if you haven’t already, don’t forget to read about

edit 3 March 2008: Hurrah! Petra has posted the roundup! Check out the many wonderful flatbreads here:

edit 3 March 2008 (a little later): Yikes. That was close! Thank goodness for google cache! When I edited the post to add the link to the roundup, I managed to erase everything else!